WASHINGTON (RNS) — After an Episcopal rector at a Washington church tested positive for coronavirus, the Episcopal Diocese of Washington is instituting a sweeping set of policies designed to help stop the spread of the disease — including suspending the use of wine during Communion.

This week officials announced the Rev. Tim Cole, a rector at Christ Church in Washington’s Georgetown neighborhood, had tested positive for the coronavirus that causes the illness known as COVID-19. The cleric was the first confirmed case in the region, and the church’s organist, Tom Smith, has since tested positive for the virus.

The reaction was swift: Cole was quickly hospitalized, Smith is in quarantine, and health officials asked parishioners who attended services recently to self-quarantine due to their potential exposure to the virus.

But church officials expanded safety measures beyond Christ Church on Monday (March 9), when the Rev. Mariann Budde, the bishop of the Episcopal Diocese of Washington, distributed a letter outlining new diocesanwide policies meant to curb the spread of the disease.

The new policies include:

In an interview with Religion News Service, Budde explained that she decided to implement the precautions after conversations with churchgoers as well as local health experts and officials at the federal Centers for Disease Control and Prevention. She said she also looked to policies enacted in the Diocese of Olympia in the state of Washington, where an outbreak of COVID-19 has led to 162 confirmed cases in the region, resulting in at least 23 deaths. 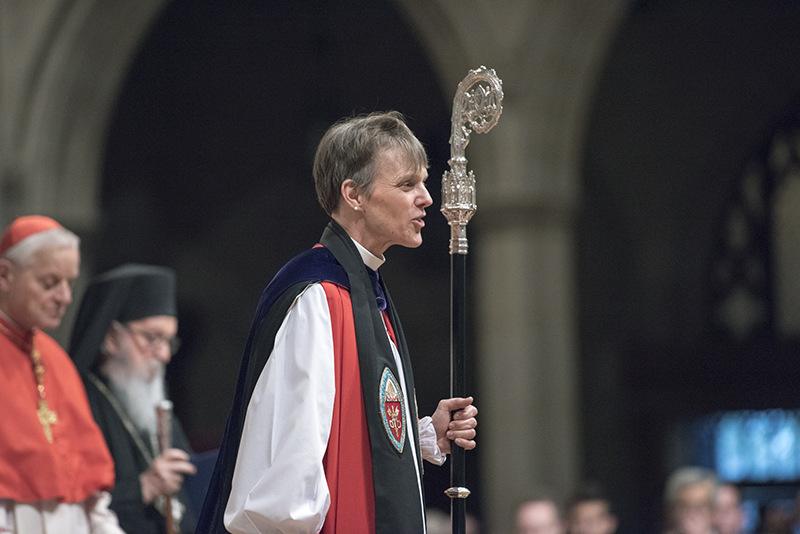 “There seems to be a body of consensus that, even though the common cup is scientifically shown to be a very low risk for transmission of infectious bacteria and virus, the recommendation for now was suspending it out of an abundance of caution,” she said.

Budde said she has been in conversation with someone from the church virtually every hour over the past few days — including Cole, who remained in stable condition over the weekend.

The bishop said she does not know where or how Cole contracted the virus, only that his symptoms began to develop after he returned from a recent Consortium of Endowed Episcopal Parishes Network conference in Kentucky — one that gathered many Episcopalians, including Budde. Budde added that while experts have reached out to some affiliated with the conference, none have been asked to self-quarantine.

DC Health reportedly issued a statement this week stating “there is no identified risk of exposure to CEEP conference attendees as a result of contact with this case.”

Some church leaders appear to be following Budde’s lead. Episcopal bishops are meeting virtually this week instead of in person as previously scheduled, and a spokesperson for the Diocese of Maryland said the bishop there is preparing a statement for Wednesday that will be “pretty much in line” with the policies used in Washington. Other churches have already made the individual decision to end the use of the common cup.

The Diocese of New York — a region with currently 170 confirmed cases of the coronavirus — still allows for use of the common cup, although that could change as well.

“It’s just constantly changing and we have to be responsive to that,” Budde said.

In the meantime, she said diocesan leaders will continue to hold regularly scheduled meetings but include options to participate remotely.

“We’re to be good citizens, and we’re to be good neighbors,” she said. “This is what faith communities in general do: We respond as pastorally and as civic-minded people.”