BOSTON (RNS) — If any locals still braving the streets walked past Boston’s John F. Kennedy Federal Building over the weekend, they may have found themselves staring at a massive black-and-white image of Anne Frank’s face.

“Anne Frank died of an infectious disease in a crowded detention center,” read the image, projected Sunday night (March 22) by activists with Jewish immigration group Never Again Action on a wall near the building, which houses the state’s federal immigration court. “Governor Baker, release everyone in ICE detention before it’s too late.”

The demonstration was part of a nationwide push mounted by progressive faith-based activists and religious leaders to release as many people held in jails, prisons and immigration detention facilities as possible to protect them from outbreaks of the rapidly spreading coronavirus infection.

“Governors can save hundreds of lives right now by releasing these detainees,” said Elizabeth Weinbloom, who helps lead Never Again Action’s Boston campaigns. “An outbreak at one of these facilities will make them as deadly as Dachau. Murderous intent is not required for a facility to become a death camp; inaction will have the same effect.”

About 2.3 million people are incarcerated nationally in local jails and state and federal prisons, per the Prison Policy Initiative. Thousands have already been released by states and counties around the U.S., from Pennsylvania’s Mercer County to Ohio’s Cuyahoga County to Los Angeles County, following the guidance of public health and corrections officials to attempt to slow the spread of the coronavirus through the corrections system.

In a news conference over the weekend, President Donald Trump also indicated that he would consider an executive order to release elderly nonviolent offenders in federal prison.

At a minimum, activists say, officials must release detainees who are over 50 years old, pregnant, have a compromised immune system or are incarcerated on an unpaid money bond. They are also pushing to allow visits from clergy, attorneys and family — at least 15 corrections systems have suspended all visitation — and to improve hygiene practices and access to medical care for any inmates who remain.

“While everyone is at risk, we have a moral obligation to ensure that our most vulnerable – the elderly, the sick, those without medical care, and those unable to protect themselves from the virus – get the help that they need,” explained a letter from The Leadership Conference on Civil and Human Rights, signed by more than 150 civil rights organizations, urging elected officials and law enforcement to reduce the prison population and protect incarcerated people from the spread of the highly contagious novel coronavirus. 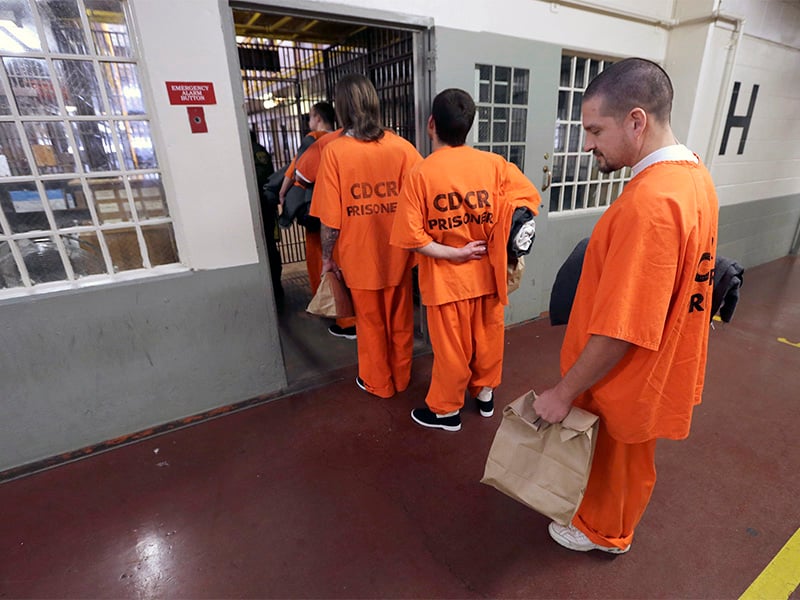 Muslim organizations involved in the decarceration efforts pointed out that Muslims are significantly overrepresented in state prisons, with about 9% of all inmates in state prisons identifying as Muslim, per a report Muslim Advocates published last year.

“We have a duty to protect our most vulnerable citizens and that includes the incarcerated,” said Matt Callahan, staff attorney with Muslim Advocates. “Without immediate action, prisons and jails can become virus tinderboxes that threaten the lives and well-being of everyone inside as well as the community at large.”

A separate immigration bond fund called Let My People Go, led by the New York Immigrant Freedom Fund, Jews for Racial and Economic Justice, Never Again Action and the New Sanctuary Coalition, aims to release as many ICE detainees as possible before the coronavirus takes its toll.

“The COVID-19 pandemic has shone a light on the ongoing emergency of incarceration: human beings locked up in unsafe, unhygienic conditions with no autonomy over their own wellbeing,” the groups wrote. “While we prepare to celebrate Passover and recall our journey from slavery to freedom, we must do everything we can to free our neighbors from these conditions NOW.”

On Tuesday, a 31-year-old Mexican national being held by Immigration and Customs Enforcement in New Jersey’s Bergen County Jail became the first detainee to test positive for the coronavirus at an ICE facility. Just days prior, a correctional officer tested positive at the same center.

Activists with Never Again Action and the New Sanctuary Coalition plan to hold a “COVID-safe” rally on Friday outside the facility, driving their cars in circles around the jail and honking to show their support for detainees held within. Faith groups such as the Church World Service Jersey City and Congregation Shomrei Emunah joined the American Civil Liberties Union-New Jersey in a letter last week calling on ICE to suspend deportations and enforcement activity in the state due to the virus.

In some of America’s largest prisons, inmates and correctional officers have already been confirmed to have the coronavirus, raising fears that it could take a deadly toll on inmates who cannot enforce social distancing, use hygiene best practices or access comprehensive medical care. 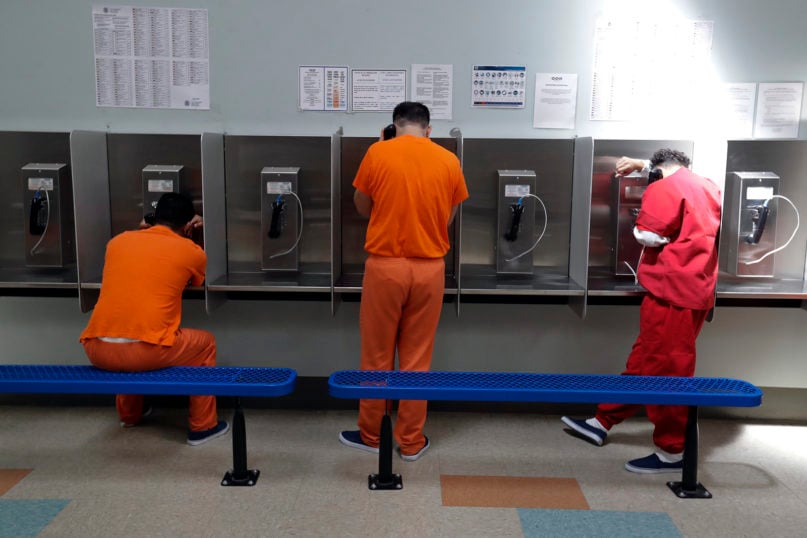 Detainees talk on the phones at the Adelanto ICE Processing Center in Adelanto, California, on Aug. 28, 2019. The facility is a privately operated immigration detention center run by the GEO Group and can house up to about 1,900 immigrant detainees, both male and female. (AP Photo/Chris Carlson)

In Chicago, faith leaders held a “socially distanced prayer vigil” outside Cook County Jail seeking inmates’ release after a correctional officer who had worked in the facility tested positive for COVID-19. Two detainees, including one held in an area where the officer worked, later tested positive for the virus.

“As people of faith, we understand that each life is sacred,” said the Rev. Rachel Birkhahn-Rommelfanger, a pastor with the Northern Illinois Conference of the United Methodist Church, who participated in the vigil. “The great Prophet Isaiah proclaimed that we must do the work of binding up the brokenhearted, proclaiming release for captives and securing liberation for prisoners. Our faith calls us to advocate for the release of people incarcerated in the jail whose lives are at risk because of COVID-19.”

At New York City’s Rikers Island, 21 inmates and 17 employees have tested positive. This week New York City Mayor Bill de Blasio announced that 300 nonviolent, elderly inmates would be released and that he is working to release an additional 800 inmates, the vast majority of whom were jailed on technical parole violations.

In a letter to New York Gov. Andrew Cuomo, over 165 faith leaders urged state lawmakers not to overturn a pretrial reform law, which eliminated cash bail for nonviolent felonies and misdemeanors, due to backlash over a series of anti-Semitic incidents allegedly committed by people released under the new law.

Rolling back the reforms, faith leaders said, would increase pretrial incarceration and worsen the spread of COVID-19 in prisons.

“Our collective moral compass demands we choose people’s dignity over politics,” the groups wrote. “As faith leaders who have seen the value of these vital reforms firsthand, we now feel compelled to speak out against moral cowardice, and call upon our state’s leadership to stand with the community they claim to serve.”