(RNS) — A Florida pastor was arrested by a local sheriff on Monday (March 30) after he refused to stop holding worship services at his church despite regulations banning large in-person gatherings that could further the spread of the novel coronavirus.

For weeks, Pastor Rodney Howard-Browne of the River at Tampa Bay Church has defied local regulations designed to stop the spread of the disease, which has killed about 2,800 people in the U.S. and infected more than 141,000, including more than 5,000 in Florida.

“I’ve got news for you: This church will never close,” Howard-Browne, a frequent defender of President Trump, told his congregation on March 16. “The only time the church will close is when the Rapture is taking place.”

OPINION: Conservative churches need to get the social distancing memo

He added: “This Bible school is open because we’re raising up revivalists, not pansies.”

But on Sunday night (March 29), after Howard-Browne reportedly gathered between 400 to 500 people, Hillsborough County Sheriff Chad Chronister issued a warrant for the pastor’s arrest. “I believe there is nothing more important than faith in a time like this,” Chronister said at a press conference. “But practicing those beliefs has to be done safely.”

Chronister accused Howard-Browne of “intentionally and repeatedly” choosing to “disregard the orders set in place by our president, our governor, the CDC” and local officials that bar gatherings of more than 10 people. 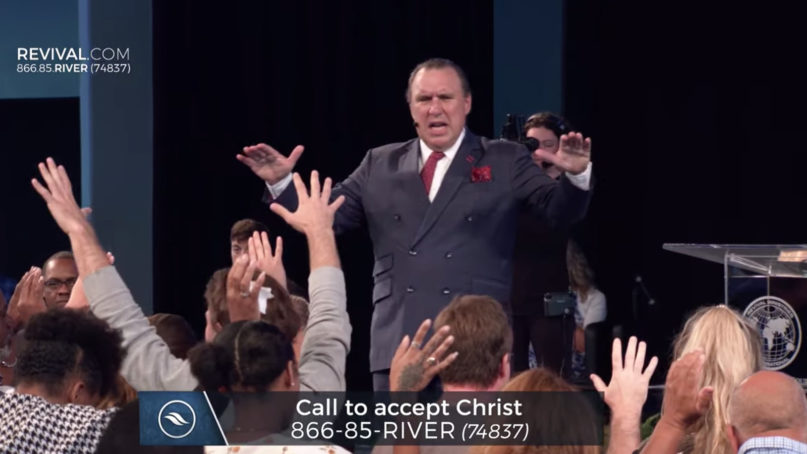 Pastor Rodney Howard-Browne, top, prays over individuals during a service, Sunday, March 29, 2020, at The River Church in Tampa. Video screengrab

“(Howard-Browne’s) reckless disregard for human life put hundreds of people in his congregation at risk and thousands of residents who may interact with them this week in danger,” he said.

Howard-Browne turned himself in on Monday afternoon and was charged with unlawful assembly and violation of public health emergency rules.

The pastor, whose faith in the divine in the crisis extends to the belief that God will multiply toilet rolls, is not alone in continuing to hold services.

According to a new survey compiled by three political scientists and the survey group Qualtrics Panels, 12% of those polled said their congregations are still open for in-person worship. Those who tend to worship in larger congregations reported a higher likelihood that they are continuing to worship in person.

Among those whose congregations continued to worship in person, 49.4% said they agree or strongly agree with the statement that the freedom to worship is “too important” to halt services.

Not even the threat of death persuaded stalwart defenders of the right to worship: Respondents who saw the phrase “… even if more people die as a result” attached to the survey question were only 4% less likely to agree that congregations should continue to gather in person.

Although some faith leaders have argued that faith communities should be considered “essential services” in the same way that supermarkets are, Frederick Gedicks, law professor at Brigham Young University Law School, said that such a claim is unlikely to hold up in court.

“So as long as the ban on large gatherings applies generally, to everyone, churches cannot complain under the (Free Exercise Clause),” Gedicks told Religion News Service on March 13.