(RNS) — It’s fair to say that President Trump makes a lot of dubious statements — more than 16,000 of them over the first three years of his administration, according to The Washington Post. It has long been the hope of his critics and even many of his supporters that the exigencies of running the country would at some point force him to abandon his habits of feigned hope and dismissive remarks. With its bleak numbers and grim experts, the COVID-19 pandemic promised to be an end to their disappointments.

So far, we’ve seen little evidence of a repentant president, not when his assurance that “it’s one person coming in from China, and we have it under control” was proved wrong. Not after Trump, having finally declared a National Emergency and recommended the country self-isolate, had to back off of his promise that the country would “re-open” for Easter.

What if the president’s mendacity actually reflects his theology — the power of positive thinking?

In the past Trump has cited his former pastor, Norman Vincent Peale, pastor of New York’s Marble Collegiate Church from 1932 until the mid-1980s, as a profound influence. One of the country’s foremost pastors during this stretch, Peale preached from Marble Collegiate’s pulpit and on his popular radio show an amalgam of theology and psychology that advocated the ability of the mind to change immediate circumstances. He laid his philosophy out in his blockbuster 1952 book, “The Power of Positive Thinking,” still in print and pushing into the top 25 of Amazon’s Inspiration & Spirituality list.

While campaigning in Iowa in 2015, candidate Trump recalled Peale’s preaching: “I still remember his sermons. It was unbelievable. And what he would do is he would bring real-life situations, modern day situations into the sermon. And you could listen to him all day long. When you left the church, you were disappointed that it was over.”

Just this past week, when challenged by a journalist for touting the effectiveness of as-of-yet-unproven drugs, the president lashed out: “I am a man that comes from a very positive school when it comes to, in particular, one of these drugs.” 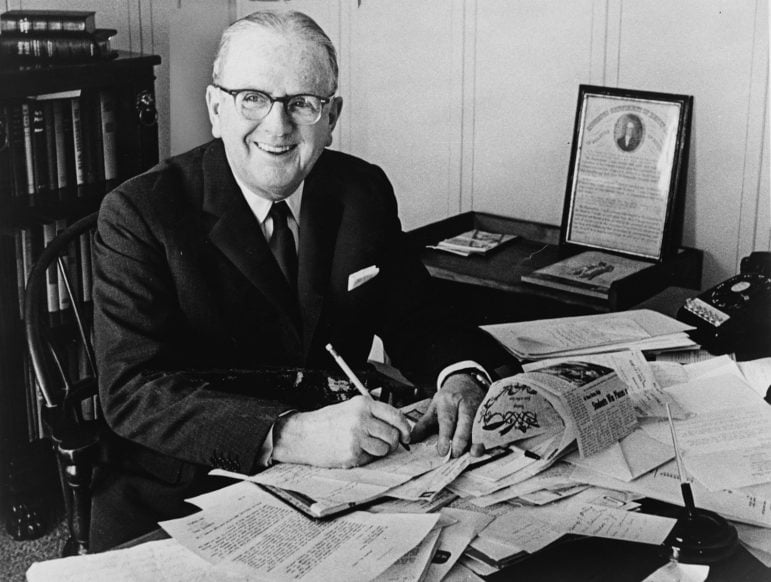 Norman Vincent Peale, shown in 1966, was a Christian preacher and author, most notably of “The Power of Positive Thinking.” Photo Roger Higgins/World Telegram/Creative Commons

Peale did not craft Positive Thinking on his own. His distinct contribution was to synthesize a popularized Christianity with New Thought, whose roots in America could be traced to Ralph Waldo Emerson and Henry David Thoreau.

The post-Civil War years saw an American nation abounding with an ethos of self-mastery. In that environment, Mary Baker Eddy, founder of Christian Science, developed a fusion of historical Christianity and the era’s confidence in the individual’s mind. By the mid-20th century, the “can do” business attitude joined with a capitalist-friendly Christianity to bolster the egos of ladder-climbing executives.

Peale’s church in Manhattan belonged to the Reformed Church in America — the oldest mainline Protestant denomination in the country. It was here that Peale grafted Christianity and New Thought — sometimes referred to as “mentalism” — into a Positive Thinking posture for his status-anxious congregation that included broad claims: “Fill your mind with fresh, creative thoughts of faith, love, and goodness. By this process you can actually remake your life.”

Trump’s belief in the power of positive thinking is evident when describing his electoral prognostications as “right,” even when the candidate he endorsed loses an election, and in assurances that he “has the votes to pass” a bill when he clearly does not.

Trump once told The New York Times that “the mind can overcome any obstacle. I never think of the negative.” Gwenda Blair, one of Trump’s numerous biographers, told Politico regarding positive thinking: “It’s gotten him this far. He has a lot of reason to believe that something like the power of gravity doesn’t apply to him.”

And indeed, for months and months, to the frustration of his critics and opponents, the president has not paid a political price for his misrepresentations, at least among his most ardent followers. Now, as a pandemic spirals out of control, his approval ratings are higher than at any time in his administration.

The coronavirus, however, also reveals how Trump’s positive thinking has limits. White elites like Trump fail to understand how their economic and political positionality — their racial, sexual and economic status and their networks of social capital — allow them to influence their reality. They confuse a positive outlook for the power inherent in their social position. In a country that mythologizes merit and hard work, the appeal of crediting outcomes to one’s mental optimism and grit is tempting.

The danger for men like Trump is when the strategy of projecting his unique version of reality runs up against a phenomenon that refuses to bend to their will. It’s a phenomenon that power and positionality cannot influence. They are left flailing.

The danger for the rest of us, of course, is that the people they hurt are the weakest among us, those who depend most on the positive potential of elite influence over policies and solutions to be implemented.

(Mark Mulder is professor of sociology at Calvin University and Gerardo Martí is professor of sociology at Davidson College. Their book, “The Glass Church: Robert H. Schuller, the Crystal Cathedral, and the Strain of Megachurch Ministry,” will be published in April 2020. The views expressed in this commentary do not necessarily reflect those of Religion News Service.)