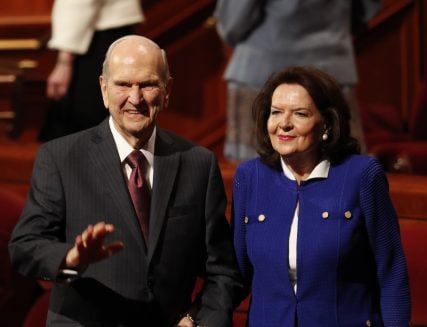 The week before General Conference is the time of year when I try to guess what will be announced or emphasized at the ten-hour event, the semiannual worldwide meeting of the Church of Jesus Christ of Latter-day Saints. This year, though, all bets are off, other than that I’m sure many of the talks will adhere to the planned theme of celebrating the 200th anniversary of the date the church recognizes for Joseph Smith’s First Vision.

This Conference is different in many ways. Because of the Covid-19 pandemic, all sessions will be shuttered to the public, with our general authorities—most of whom are elderly enough to be among the most vulnerable to dying from the virus—giving their addresses via livestream from Salt Lake City. This is just one of many changes affecting the church right now, from the closure of all temples worldwide to the recall or early release of many missionaries. Every day, it seems, there is some new development.

The church is hunkering down along with the rest of the world, and it’s the right thing to do, probably for many weeks to come. There are early indications that social distancing is achieving the desired effect and saving lives, just as there is sad evidence that the virus is still taking root in those communities, including religious communities, that have defied isolation instructions by continuing to meet together in person.

I’m proud of the way the church has handled itself in the last month. Compared to other religions we tackled the problem days earlier and more comprehensively than others were able to, a product of our highly centralized structure. That doesn’t mean there haven’t been some missteps, like last week’s lovefest for returning missionaries at the Salt Lake City airport, but it does mean the institution didn’t attempt to downplay the potential danger of Covid-19. Instead, it rolled up the sleeves of its ubiquitous white dress shirts and got to work.

If you’re a regular reader of this column you’ve probably noticed that I’m generally much quicker to criticize institutions than individuals. For me, the beauty of Mormonism happens at the local level, with the ragtag ward members I love, and not through organizational charts of the identically dressed, mostly white, men who steer the ship.

But the last few weeks have brought a surprising reversal in which I’ve found much to praise about how the institution has behaved in a crisis and less to compliment in the way some ordinary members of the church are using the pandemic as an occasion to shore up their testimony of Mormon exceptionalism. This has included statements like these:

Could all of the above be true? Sure, of course. Is this the right time to be dwelling on these things, let alone saying them out loud in the face of other people’s suffering? No. No, it is not.

And the church can help set that tone.

One thing we’ve learned about Mormons, at least in the United States, is that we generally take the lead from church leaders about how to think and behave around certain topics. Two prominent political scientists, for example, have said that we’re “dry kindling,” waiting for the spark that comes from LDS leaders before they swing into action. Often, that spark comes at General Conference.

So here is what I’m hoping for this weekend: that we focus on a bigger God and a less grandiose church. That our leaders emphasize how to respond to Covid-19 with Christlike compassion for the whole world, without indulging in denominational pride. That we set aside our need to construct a narrative out of what is happening—a narrative in which we are, predictably, the chosen heroes—and instead cast our energies on helping the 99.8% of human beings who are not members of the Church of Jesus Christ of Latter-day Saints.

And, if a columnist can dream, I would love to see us take our cache of $100+ billion and use it to bless the world immediately. After the market’s recent gyrations, the church’s (literal) stockpile will be noticeably less now than it was in December, underscoring the futility of putting our faith in Wall Street for humanity’s rainy day. But a fortune of, say, $60 billion or $75 billion could commission a whole lot of ventilators for people who might otherwise die, and offer desperately needed protective equipment to the health care workers who are risking themselves to save lives.

This is the kind of emergency charity the church has historically done well—the kind that responds to emergencies without encouraging long-term dependence. We have the capacity to do so much good during this crisis. I hope that General Conference helps ordinary members to catch a vision of how the church—which is all of us—can become the hands and feet of Jesus right now.

Faith
Senator Mike Lee’s just one example. Mormon men still like Donald Trump.
Christianity
For Mormons in a faith crisis, the Gospel Topics essays try to answer the hard questions
News
With rising COVID-19 cases inside the Vatican, pressure mounts for Francis to don a mask
Purple Catholicism
Your dread of the 2020 election and coronavirus will end. What will you obsess about then?
News
Sean Feucht’s ‘finale’ worship protest on the National Mall included more politics than usual
© Copyright 2020, Religion News Service. All rights reserved. Use of and/or registration on any portion of this site constitutes acceptance of our User Agreement and Privacy Policy, Privacy Statement and Cookie Notice. The material on this site may not be reproduced, distributed, transmitted, cached or otherwise used, except with the prior written permission of Religion News Service.