While the Church of Jesus Christ of Latter-day Saints has been quick to act to limit the potential damage of the coronavirus, some of its members have not followed the church’s example.

Last night hundreds of people gathered at the Salt Lake City airport to welcome Mormon missionaries who had been serving in the Philippines. The scene looked like this, according to Kelly Vaughen of KUTV: 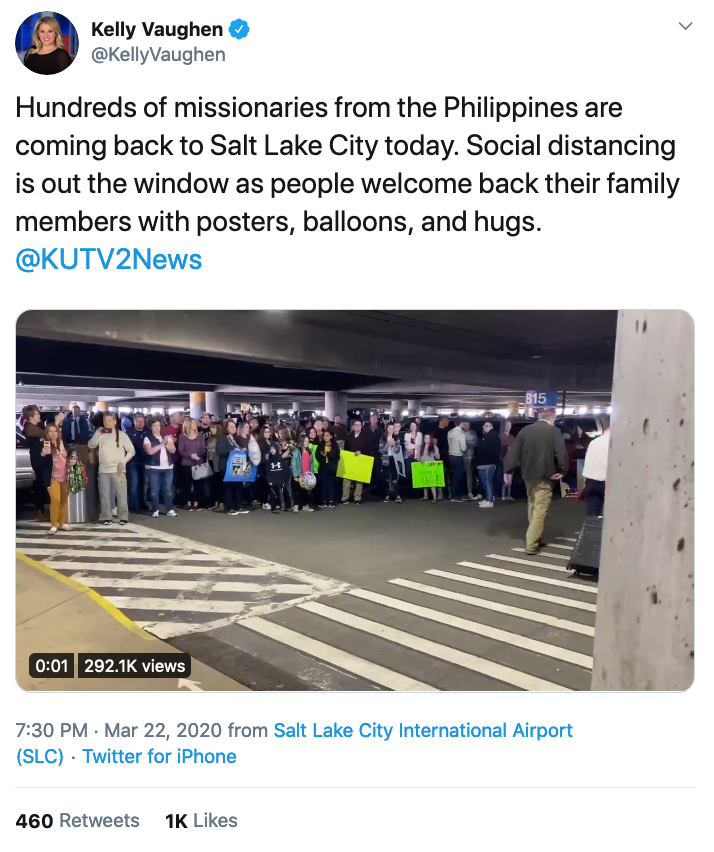 These people are not practicing social distancing, despite the fact that a state public health order that’s in place until at least April 1 has prohibited any gatherings of more than 10 people and instructed residents to avoid any unnecessary social visits. Apparently those who went to the airport were asked to maintain a six-foot distance from one another. Instead, it’s clear from the photos that some were crowded together en masse, jockeying for position to be the first to cheer for their beloved missionaries.

Some people may have thought this was fine because “most” of the missionaries had already been in isolation for two weeks before their flights home. Therefore most of them would not be carrying the coronavirus.

But the missionaries were not tested for the virus, so it’s all too possible that at least a few were infected but asymptomatic. It’s also possible that even those who had been in successful self-isolation before leaving the Philippines picked up the virus while traveling home. And because of the mass gathering at the airport, upon arrival they could infect not just their own families but others as well.

People, we are smarter than this. I can understand the excitement of greeting a returned missionary. I also understand how invincible people feel when they’re in their late adolescence—a sense of power that, on the missionaries’ side at least, is compounded by the fact that the virus is not targeting people their age and they have been doing the Lord’s work. That’s like a triple whammy of perceived invulnerability. For eighteen and nineteen-year-olds that kind of behavior is predictable and almost understandable. But their parents?

Of course there is a sense that we want, as much as possible, to keep life normal. It’s normal for the Salt Lake City airport to be crammed with people who are beaming with pride and expectation as they await their missionaries.

But these are not normal times, and we need to get used to that fact quickly.

I’m grateful that the Church was swift to issue additional, 100% clear instructions last night that should prevent all such further airport gatherings. Going forward, only parents are supposed to go to the airport to pick up their missionaries. No grandparents, younger siblings, or family friends.

Afterwards, the missionaries themselves need to avoid “leaving their homes for any reason” should “stay in a well-ventilated room, preferably alone” or at least six feet away from other family members.

But what’s frustrating is that according to KUTV, the Church already issued stringent guidelines about how missionaries were to be picked up at the Salt Lake airport, with the all-caps designation “MUST BE ADHERED TO EXACTLY”: 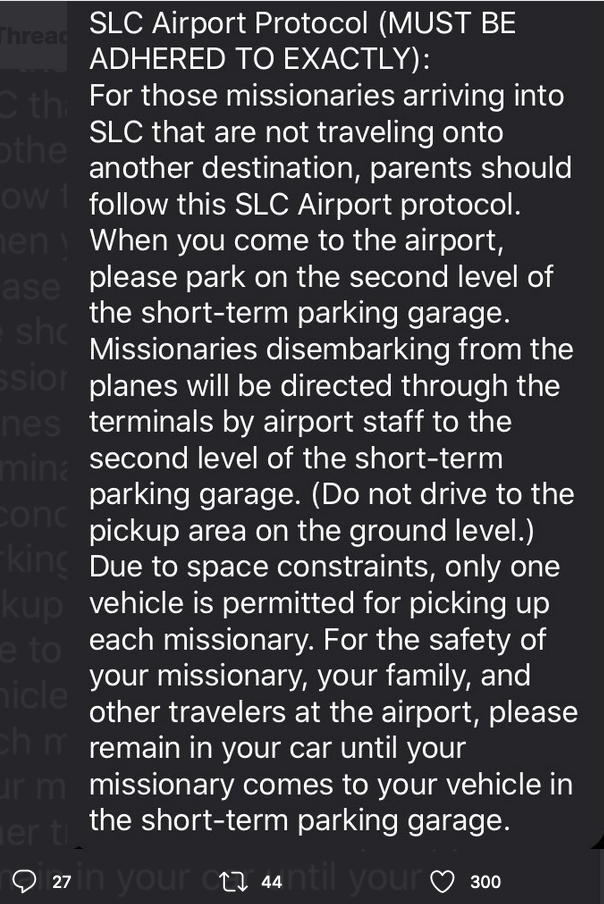 It’s possible that this instruction to stake presidents was not disseminated widely or quickly enough to prevent what happened last night. There’s certainly a lot of confusion these days as people try to keep up with rapidly changing circumstances. But it’s also possible that some excited family members got the memo and chose to ignore it.

Look. We’re expecting thousands of missionaries to return home in the coming weeks from points all over the globe, and we need to be sensible. Serving a mission does not give a person some kind of special immunity from spreading a deadly virus to vulnerable people. Viruses are not respecters of persons when it comes to whom they would like to infect. They would like to infect everyone, thank you!

And they love nothing more than when people make that easier through mass gatherings like these.

Related posts about the coronavirus:

What kind of people will Mormons be in global apocalypse?

Prepping for coronavirus the Mormon way