(RNS) — On Wednesday, the Church of Jesus Christ of Latter-day Saints took the unprecedented step of prohibiting attendance at its April 4–5 semiannual General Conference because of the coronavirus. The conference’s 10 hours of programming will go forward as planned, with speakers and music being streamed live online, but the 21,000-seat Conference Center on Temple Square in Salt Lake City will be empty.

The church has been promising for months that this General Conference, which will commemorate the 200th anniversary of Joseph Smith’s First Vision, would be historic and unlike any other previous conference. Well, it’s certainly new and different, but not in the ways we hoped. It’s not the first time that General Conference has been closed to the public, but it is the first that has occurred during many members’ lifetimes; this happened roughly 75 years ago during World War II. President Russell M. Nelson, who is 95, no doubt remembers that, but most of the rest of us do not.

I was glad to hear the church’s announcement, because over the past few weeks I’ve seen many U.S. Mormons fail to take this virus seriously. Just this Sunday at church a very smart person I care about complained that the threat is overhyped and people are panicking for no reason, since it’s just like the seasonal flu.

She’s not alone in voicing this view, but this is dangerously wrong.

This is not the seasonal flu. Even if the death rate from coronavirus turns out to be just 1% instead of 2%-3%, which the earliest studies showed, or over 6% (!), which is what it is as of today in Italy, a death rate of 1% is still 10 times more lethal than the seasonal flu.

This is a novel virus for which we have no prior immunity and no vaccine.

Let that sink in for a minute. This means the two things that normally slow the spread of a viral infection are not available to us. The only protection we have is to try to slow the virus down as it moves through the population so that it can’t reproduce faster than the world’s health care systems can treat the sick. And the only ways to do that are through quarantines, compulsive hand washing and (we pray) prayer.

In Italy, the infection is spreading so quickly that hospitals can’t keep up. There are reports of ICU patients being treated in hallways because there are no beds available. A Newsweek oped by someone who identifies herself as “a doctor in a major hospital in Western Europe” says her colleagues in northern Italy are actually having to prioritize which patients to save because the system is overwhelmed with so many people being sick at the same time.

Remember that statistic about how more than 80% of people experience only mild symptoms with coronavirus and feel like they have the regular seasonal flu? Terrific — for them. But that means that up to 20% can have more severe cases, some requiring hospitalization and even acute respiratory care. If our health care system is slammed all at once, the U.S. is in trouble. According to The New York Times, the U.S. has 2.8 hospital beds per 1,000 people, which is even less than Italy (3.2).

We have got to Slow. It. Down. 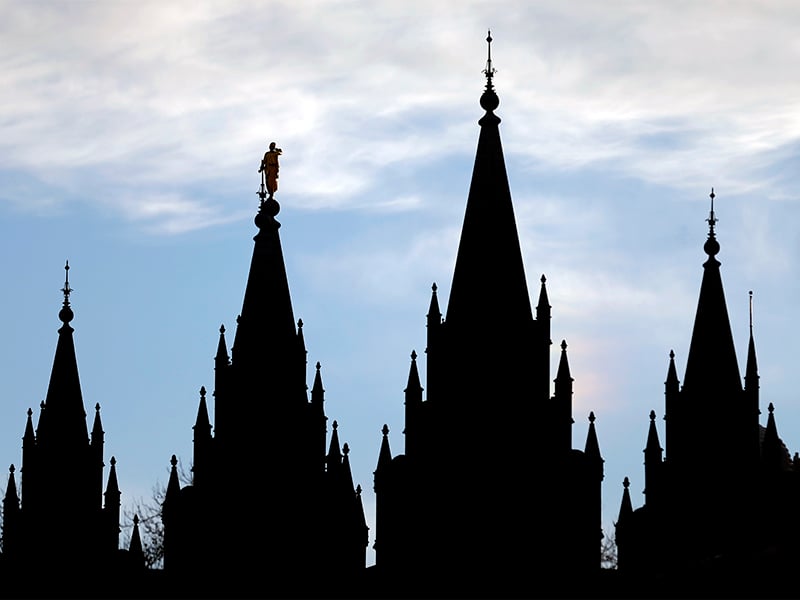 Having the Church step in and so clearly take the coronavirus seriously is a significant step in getting Latter-day Saints around the world to pay attention. And LDS leaders didn’t just stop at limiting General Conference. Some other announcements included:

Most of the chatter I’ve seen in reaction to the Church’s decisions has been positive, though some Latter-day Saints wonder if the Church overreacted by not permitting the public to attend conference. It is not an overreaction. It boils down to this: Which member of the Quorum of the Twelve and the First Presidency do you see as expendable? The death rate for the elderly is disproportionately high, apparently in the range of 10%–12%. Statistically, that means that if all 15 elderly men in the Quorum and the First Presidency came down with the virus, one or two of them would die of it.

I hope that Latter-day Saints who are lucky enough to stay healthy over these next weeks and months will remember that we’re isolating ourselves to protect the most vulnerable people in our society. Sam Brown, an ICU physician in Salt Lake City, has a wonderful post about this at By Common Consent, in which he outlines things that members of the church can do to practice “social distancing” (isolation) while also continuing to study the gospel together online, take care of the poor and keep each other’s spirits afloat.

For once I would advise also reading the comments. They’re actually helpful and interesting, especially this one from Sam, who says that our swift action now can mitigate disaster:

“We have vulnerable people at high risk for imminent death, and we can actually step in and save them with modifications to our society that only last a month or two. This is a Willie and Martin Handcart company moment in my view.”

Yes, this is a Willie and Martin Handcart company moment. The Sunday sermon for every Sunday in the near future is this: Do everything you can to benefit your neighbor, even at cost to yourself. The gospel lesson every day for the weeks and months to come is this: The job of the 80% is to deliver the 20% to safe harbor.

Prepping for coronavirus the Mormon way

(This article has been updated in the section regarding bans on large religious gatherings.)