(RNS) — In 1831, as a cholera pandemic made its way across Europe, the noted Jewish scholar Rabbi Akiva Eiger issued a ruling to the Jews of Posen (now Poznan, Poland) ordering them to minimize social contact and reduce gatherings to no more than 15 people. Eiger even supported law enforcement for such steps from the normally hostile secular authorities. He urged the Jewish communities in his area to be scrupulous about hygiene, specifically mentioning regular washing of hands and face.

Above all, he demanded that all behavior should be in accordance with the guidance of medical experts, whose recommendations, he said, must be followed to the letter.

Rabbinic directives for social distancing and curtailing prayer gatherings and other religious social meetings, in other words, are not new. The Jewish response to the COVID-19 pandemic has been consistent with Eiger’s example and a long tradition of wise response to the threat of contagious disease.

Recent news stories have rightly called attention to ultra-Orthodox communities in the United States and Israel that have seemingly ignored state restrictions on gathering. But even in those communities, where a profound reluctance to change their religious lifestyle complements a suspicion of secular science and society, leaders such as the Belzer Rebbe have been forthright in demanding that religious services as well as socializing be curtailed and have supported quarantine instructions, however belatedly.

Indeed, dealing with contagious disease has been a Jewish preoccupation since ancient times. Many passages in the books of Leviticus and Numbers are among the earliest manifestations of Jews’ understanding of the importance of quarantine, and much of Jewish ritual life is devoted to ensuring a high standard of hygiene. In Jewish wisdom, physical cleanliness is consistently connected to spiritual purity.

The Talmud cautions against transporting disease from one place to another and advises readers to stay at home at a time of plague and practice social distancing. It contains strict guidelines for maintaining hygiene, especially the importance of regular washing of hands and feet. In his addendum to the main text, the 16th century rabbi Moses Isserlis sounds like a modern-day state governor in teaching that we are obligated in times of plague to do our utmost to avoid contagion of self and others. It is forbidden, he cautioned, to rely on miracles.

This way of life, by providing Jewish communities with greater protection against the Black Death during the Middle Ages, may have even contributed to the anti-Semitic scapegoating and attacks on Jewish communities, accusing them of being behind these plagues.

Dr. Martin Blaser, a professor of microbiology and medicine at Rutgers University, has suggested that as the plague peaked as spring approached, Passover housecleaning, and especially the removal of grain that attracted rats, may have played a significant role in reducing contagion. 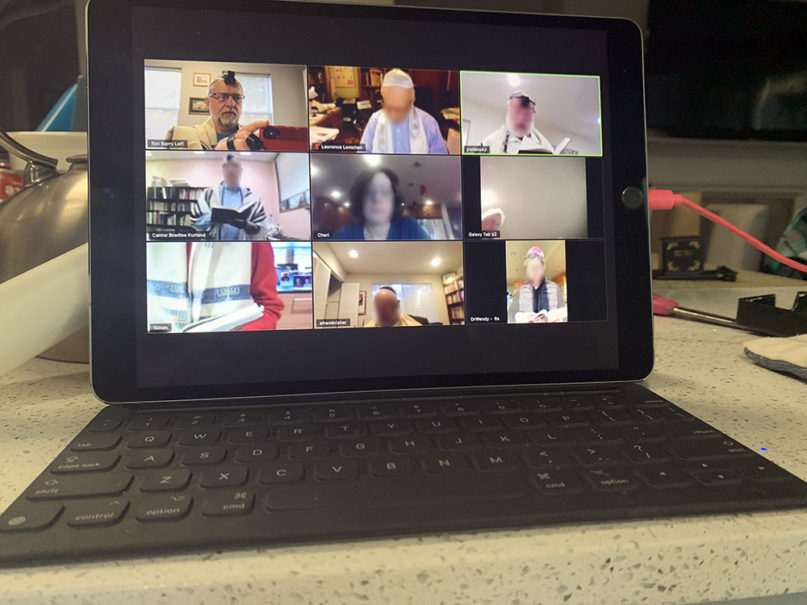 Passover won’t have that effect in this pandemic, however, if we gather as we are used to. Rabbinic authorities have been spurred to rule on the use of video meeting apps such as Zoom for prayer services and seder meals. While the Conservative Jewish movement has overwhelmingly embraced these opportunities, the issues are still hotly debated in the Orthodox community.

It’s not only religious legal issues at stake. There is also a profound fear that allowing technological tools to dominate could undermine the values of Jewish religious life.

“Already, virtually all of the youth in our synagogue use technology on Shabbat, whether they’re honest about it with their parents or not,” wrote one prominent Modern Orthodox rabbi recently. “Many opportunities for reflection and privacy have become burdened with relatively shallow interaction instead of rest and reflection. I fear that Shabbat has already moved way too far in that direction and that this will move it further there.”

Nevertheless, the communication tools now at our disposal are invaluable in overcoming the isolation that present circumstances demand. A hundred and fifty years ago, Rabbi Israel Meir Kagan, known popularly as the Chafetz Chaim, highlighted the religious obligation to communicate with family during wartime as a matter of  “pikuach nefesh” — saving life, even if only through the psychological benefits of social contact.

A century later, Rabbi Shlomo Goren, as chief rabbi of Israel Defense Forces, ruled that the obligation upon soldiers in wartime to reassure families of their safety warranted using the telephone on Shabbat.

Initiatives such as the American Jewish Committee’s Twitter campaign #BeAMensch reflect the importance Jewish tradition places on ensuring that the community be connected and cared for, even and especially in times of isolation.

The current pandemic has frequently been compared to war, with an invisible but deadly enemy. Jewish teaching not only demands that we take the necessary steps to combat it, but that we must do as much as we can to prevent the effects of this combat compounding social alienation.

(Rabbi David Rosen is the American Jewish Committee’s director of international interreligious relations. The views expressed in this commentary do not necessarily reflect those of Religion News Service.)