As we come to the last Sunday in Lent, the 40-day period of preparation in which Christians prepare for the sorrow of Holy Week and the joy of Easter, some churches are pre-recording their online Palm Sunday services, for which diligent preachers are already preparing sermons.

As part of our final preparation for the Passion and resurrection of our Lord this year, I’d like to suggest a refresher. For centuries Christians’ Holy Week observances have included quasi-ritual anti-Judaism. Our Gospel texts make clear why: It is “the Jews” in Matthew’s text who insist “his blood be upon us and our children.” After the verse from John cited above, an incredulous Pilate asks why the Jews would wish him to crucify their king. “We have no king but Caesar!” they respond.

There is a historical, Christian explanation for these verses: In the first and second centuries, several Judaisms were competing for primacy. One would become what we think of as Christianity, for whom Jesus of Nazareth’s death and resurrection is the culmination of Israel’s history. It attracted mostly gentiles. Another barely registered Jesus’ failed claim of messiahship on the way to becoming the rich and variegated world of Judaism we have today.

But within that conflict, the nascent Gospel-writing Christians shaded their Jewish rivals as more responsible for Jesus’ death and Romans as less. That shadow became a monster: For centuries on Good Friday, Christians have spilled out of services having ritually reenacted the Jews’ shout to “crucify him!”

In past centuries, stoked-up Christians would proceed to look for Jews to harass, stone, or worse. Church: We have sins that need atonement. How can we make our Holy Week observances this year part of that atonement?

As part of a course I co-teach with Rabbi Laura Duhan Kaplan on Jews and Christians in conversation, we take students each year, often during Lent, to visit both a synagogue and a church. Last year, at our church visit, the minister asked me before the service began how to pronounce “Gabbatha.” That could only mean one thing: The text she was about to read was the one above, from John 19. I immediately thought, “Please, Jesus, don’t do this to me.” I had thought we would be free from anti-Jewish texts since we were in Lent but not Holy Week. 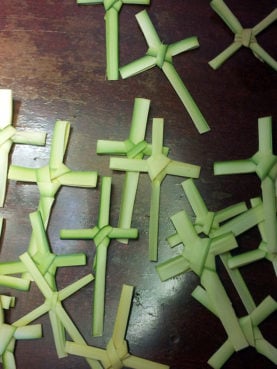 Alas, the church was evangelical and, bound by no lectionary, was reading ahead. During the service, as the pastor interviewed Rabbi Kaplan and me, I expressed that it was hard to hear that John text with Jewish friends present.

Rabbi Laura agreed that the text is hurtful and dangerous, yet she responded with grace: She observed that it would be no less embarrassing for Jews to have gentiles hear the Old Testament laws on how to treat slaves.

“Wow, Rabbi Laura, you really saved our bacon!” I told her later. (She suggested I reword my appreciation when talking to someone who keeps kosher.)

Some Christians have contended that Christianity’s anti-Semitism problem is inherent in Christianity itself. If you have a Christology at all, you will be anti-Jewish, as scholars (like Rosemary Radford Ruether) and popular writers (like James Carroll) have argued.

I disagree. For me the internecine rhetoric between rival Judaisms is baked into the New Testament, but that doesn’t make Christianity inherently anti-Jewish. The texts are not inherently tainted. Interpreted properly, the texts contain nothing but “life abundant,” as Jesus himself promises.

But that’s not how Jews tend to hear them. They often react, understandably, with bafflement and anger. Trauma lingers for generations even among those without first-hand experience of the traumatic events themselves. How can we expect our Jewish neighbors to take the eighth chapter of the Gospel of John, when Jesus inflicts a sort of biological curse upon Judaism, describing “some Jews who believed in him” as children of their father, the devil? (John: 8:31, 44)

What might surprise Jewish readers of the New Testament are the Israel-affirming bits that show that the Gospels are thoroughly Jewish. Jesus and his rivals argue about food laws because, well, Jews argue about food laws. They argue about how to relate to Rome because that was a contentious issue in first-century Judea. They argue together with tools all Jews recognize and honor — the Torah and the life of worship and festival known as Judaism.

So what do we do with these texts that are still in our Christian Scripture? We don’t dismiss them. We situate them historically as I have done here — as a reflection of one claimant to the legacy of Israel clawing for space against another.

And we read them as God’s own word. Israel is, inarguably, God’s chosen. There is no lasting curse on Israel for killing God, an idea that comes from ancient and medieval anti-Judaism that the Catholic Church, for one, officially disavowed a half-century ago at Vatican II. The only relevant curse is the one God pronounces on Adam and Eve — the one lifted in Christ. If God’s own people — the Romans and the authorities of Judea, who stand in for the rest of us, hadn’t put Jesus to death, neither we nor anyone else would be saved.

And we seek out teachers like Rabbi Laura who will discuss how they read their sacred texts and ours. One of the great graces of Christianity’s rediscovery of our Jewish roots after the Holocaust is that Jews and Christians can discuss God and the Bible again. Not just human rights and democracy, important as those things are, but God.

There is no need to pretend we’re all the same “deep down.” Nor need we suggest our differences are insurmountable in God’s own time. What better time for clergy to ask a Jewish friend to look over your Holy Week sermon manuscript?

No one to ask? Visit events at the synagogue and make friends. You’ll find Jews with questions about Christianity, too.

Abraham Joshua Heschel liked to joke that when the Messiah comes, we can ask, “Hey, have you been here before?” And then he, Rabbi Heschel, would run up to the Messiah and whisper into his ear, “For God’s sake, don’t answer.”

(Jason Byassee is the Butler Chair in Homiletics and Biblical Hermeneutics at Vancouver School of Theology. Previously, he was senior pastor of Boone United Methodist Church in the Western North Carolina Conference. The views expressed in this commentary do not necessarily reflect those of Religion News Service.)