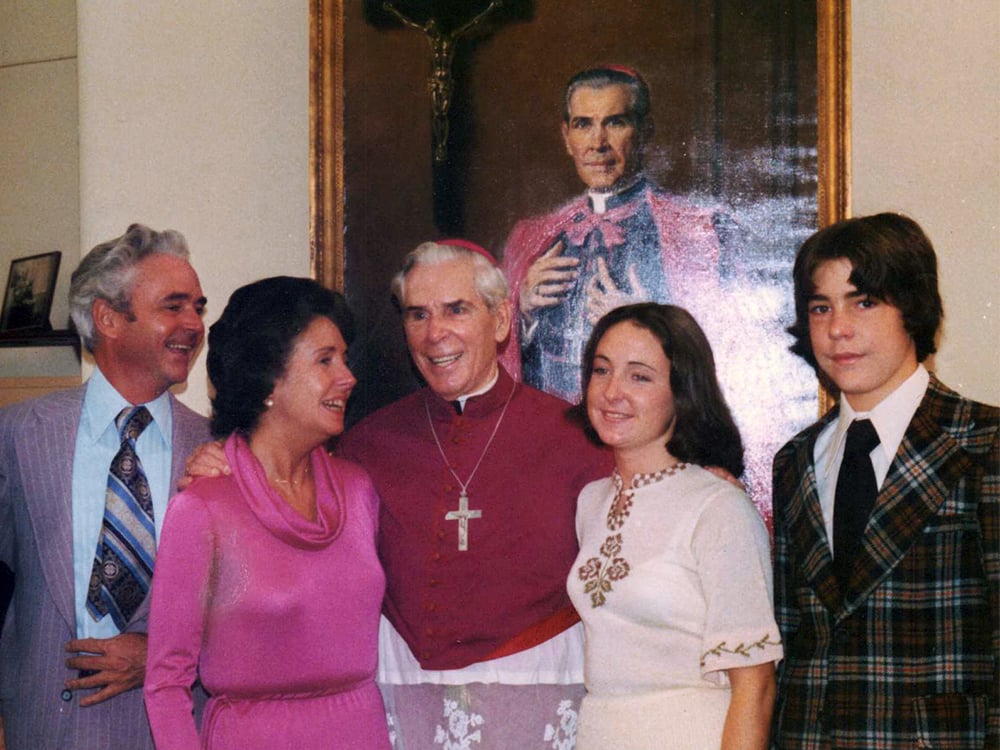 VATICAN CITY (RNS) — The Catholic Church's pioneer of electronic evangelization, Archbishop Fulton Sheen, was a missionary of the modern age, bringing the Church into millions of homes and giving a sometimes obscure faith an approachable, contemporary face.

After appearing frequently on “The Catholic Hour” radio show from 1930 to 1950, his hit television series “Life Is Worth Living” drew millions of followers through the 1950s, won him an Emmy and landed him on the cover of Time magazine. 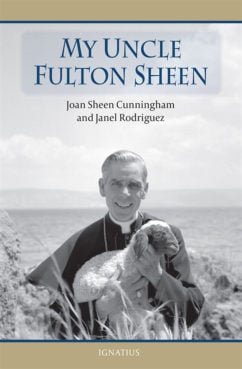 The combination of Sheen’s personal holiness and tremendous popularity made him a perfect candidate for sainthood after his death in 1979. But his road to canonization was abruptly and indefinitely halted last December.

“He was a very holy, holy man and he deserved to be beatified,” said his niece, Joan Sheen Cunningham, in an email interview. She is the author of a new recollection, "My Uncle Fulton Sheen." She added, “I’m disappointed that it was cancelled.”

In 1951, a year before his television program first aired, he was appointed auxiliary bishop of New York after being named national director of the Society for the Propagation of the Faith, charged with promoting evangelization in the United States.

“He became a missionary extraordinaire without having to leave the studio,” Cunningham wrote in her book, which allowed him to raise “record-breaking funds for the missions worldwide.”

Cunningham, 92, who was close to Sheen from the age of 10 until two days before his death, relates her uncle’s “foolproof two-part formula” for living out his priestly vocation, centered around Eucharistic adoration (praying before the sacrament) and a special devotion to the Virgin Mary.

She also portrays Sheen as a man with “a ready sense of humor and the most infectious belly laugh,” who had proudly taught his dog, Chumley, to put his paws together in order to say grace before meals.

The Diocese of Peoria, where Sheen was raised and started his ministry, began the necessary paperwork for beatification in 2002 and sent it to the Congregation for the Causes of Saints, the Vatican department charged with vetting saints. Several years later a miracle was attributed to Sheen, a necessary requirement for sainthood.

In September 2010, a baby in Goodfield, Illinois, was born showing no vital functions for more than an hour. The child's parents prayed for Sheen’s intercession for their son, who was miraculously revived. The parents named the child James Fulton Engstrom, and the Vatican’s Congregation for the Causes of Saints attributed the miracle to the famed televangelist.

Pope Francis approved the miracle last November, which paved the way for the canonization process. The beatification ceremony was scheduled to take place Dec. 21, but only two weeks before the ceremony, the Diocese of Peoria announced that it was postponed.

“The Holy See decided to postpone the date of Beatification, at the request of a few members of the Bishop’s Conference who have asked for further consideration,” a Dec. 2 statement from the diocese read. 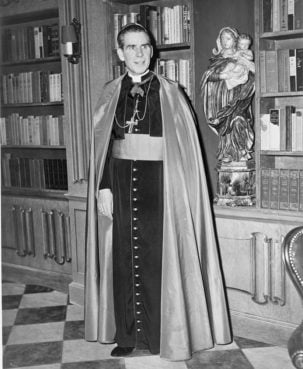 Bishop Fulton J. Sheen on a set for one of his regular television programs in 1952. Photo by Fred Palumbo/LOC

“We were all packed and ready to go and then I got the call that it was canceled,” Cunningham said. “I was very, very upset. As is the whole family." The Vatican gave no further explanation.

Some Catholic experts tie the decision to issues regarding Sheen’s time as bishop of Rochester, New York, from 1966 to 1969. The diocese has been entangled in numerous clergy sex-abuse cases. In September, the diocese filed for bankruptcy after state legislation extended the time victims of sexual abuse crimes have to file lawsuits.

“I’m hoping in August maybe the Vatican will look at it again and have the beatification,” Cunningham said.

“It sounded like (the Vatican) had to investigate things,” she added. “Well, my uncle was investigated so many times, I don’t think they can find anything.”

The delay is only the latest imbroglio centered on Sheen. For years, Cunningham and the Diocese of Peoria, where he was ordained in 1919, have been embroiled in a legal battle with the New York archdiocese about where Sheen’s earthly remains, or relics, would reside if he were to be made a saint.

“My uncle was from Peoria,” Cunningham wrote in "My Uncle Fulton Sheen." “There was already a museum set up in his honor, which was becoming a popular destination site for pilgrims and fans. If he was canonized and the body of their native son and homegrown saint returned to them, it would no doubt be a boost to the tourism and the economy there.” A tug of war over relics is nothing new and in fact has “been kind of a “Catholic sport” for centuries,” said Jorge I. Dominguez-Lopez, the editor of Brooklyn’s Catholic paper The Tablet. Having a saint in your diocese can mean a significant boost to visibility, pilgrims and donations.

According to Cunningham, her uncle, credited with celebrating the first televised Mass on Easter Sunday of 1940, would be especially relevant today. As priests all over the world adapt to the coronavirus pandemic by livestreaming their masses and using new media to evangelize, she said, Sheen can offer inspiration.

If Sheen were alive today, “I think he would preach to think of other people,” she told RNS.

“In this terrible time, if people thought about each other they might not go out and expose somebody else,” she said. “There are no masses or anything, but you can still pray at home very well.”

“I hope that the memory of his preaching will continue,” she added. “If we get all this behind us and he is finally beatified, I think that it will renew a lot of his life to people.”