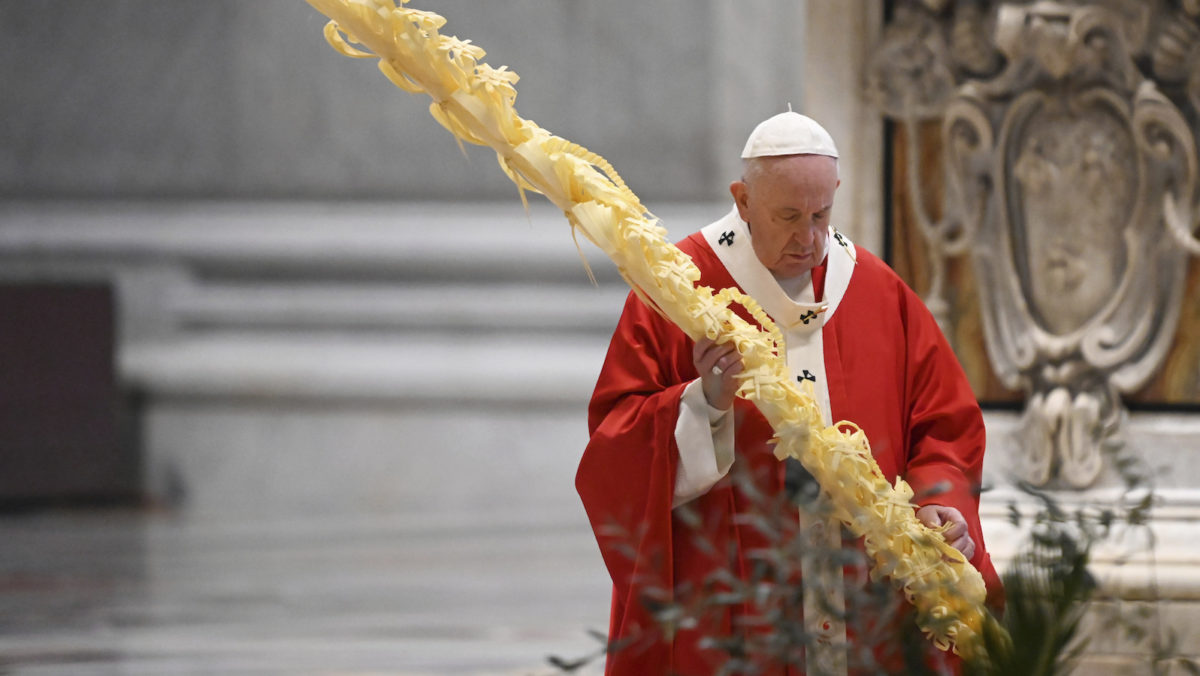 Pope Francis holds a palm branch as he celebrates Palm Sunday Mass behind closed doors in St. Peter's Basilica, at the Vatican, on April 5, 2020, during the lockdown aimed at curbing the spread of the COVID-19 infection, caused by the novel coronavirus. (AP Photo/pool/Alberto Pizzoli)
April 8, 2020
Nicole Winfield

ROME (AP) — The Vatican said Wednesday (April 8) that Pope Francis has created a new commission of experts to examine whether women can be deacons, an ordained role in the Catholic Church currently reserved for men.

The 10-member commission, the second of Francis’ pontificate to study the fraught issue, includes equal numbers of men and women representing the United States and six European countries.

Deacons are ordained ministers who perform many of the same functions as priests. They preside at weddings, baptisms and funerals, and they can preach. They cannot celebrate Mass.

Married men can be ordained as deacons. Women cannot, though historians say women served as deacons in the early Christian church.

In response to women demanding to be given greater roles in the 21st century, Francis established a commission in 2016 to study female deacons in the early Christian church. But the members failed to reach a consensus and the group effectively ended its work.

The issue was revived during Francis’ 2019 summit on the Amazon. The region’s bishops called for the question of women deacons to be revisited given the shortage of priests in the vast territory. Francis agreed at the time, and the new commission appears to be his follow-up.

Significantly, the scope of the commission’s mandate does not appear to be limited to the early church, as was the 2016 commission. Amazonian bishops had called for the real-life experiences of their region’s Catholic faithful to be taken into consideration in any new evaluation.

Advocates for expanding the ministry to include women say doing so would give women greater say in the ministry and governance of the church, while also helping address priest shortages in several parts of the world.

Opponents say allowing women to be deacons would become a slippery slope toward ordaining women to the priesthood. The Catholic Church reserves the priesthood for men, saying Christ chose only men as his 12 apostles. Francis has repeatedly reaffirmed the teaching.

The new commission has as its president the archbishop of the central Italian city of L’Aquila, Cardinal Giuseppe Petrocchi. An official from the Holy See’s powerful Congregation for the Doctrine of the Faith was named to serve as No. 2.