VATICAN CITY (RNS) — In early February, the second-highest-ranking prelate in the Vatican told news outlets that a long-awaited report into the ascent of disgraced former Cardinal Theodore McCarrick would be published in the “near future.”

In 2018, Pope Francis ordered that the Vatican investigate all of the documentation it had collected over the years regarding McCarrick, including data gathered in the dioceses of New York; Metuchen and Newark, New Jersey; and Washington, D.C., where he had served.

Almost three months after the February announcement, the report has still not seen the light of day.

A previous Vatican investigation found McCarrick guilty of sexual abuse against minors and seminarians and laicized him, stripping him of his red hat and removing him from the priesthood. McCarrick, who was once the most influential figure in U.S. Catholicism, is now a recluse and has vehemently denied the accusations made against him.

Many remain eager to see the forthcoming report, especially those who knew or were influenced by McCarrick, who is accused of using his position as a cardinal and Vatican liaison to sexually abuse seminarians and even underage boys.

For the Rev. Mark White, 49, born and raised in Washington, D.C., the revelations surrounding McCarrick that emerged in late 2017 struck him “like a punch deep in the gut.” Former Cardinal Theodore McCarrick, left, then the archbishop of Washington, confers the chalice during the ordination of Mark White in 2003. Courtesy photo

Born to a Protestant family, White converted to Catholicism in college and immediately afterward entered the seminary to become a priest. In 2003, he was ordained to the priesthood by McCarrick – who was the archbishop of Washington from 2001-2006.

White became a priest soon after the Spotlight team at The Boston Globe released its devastating report detailing the extent of the sexual abuse crisis in the United States and the efforts made by the Catholic Church to cover it up.

In this context, McCarrick was “the great savior of the American episcopacy” and “the face of the American Catholic Church,” White said in an interview with Religion News Service on Tuesday (April 21).

Like many others at the time, White said, he was aware of the rumors of inappropriate behavior with seminarians surrounding the newly appointed bishop. Influential lay friends, he said, had even lobbied at the Vatican to keep McCarrick from taking the seat in D.C. in order to protect the seminarians there. 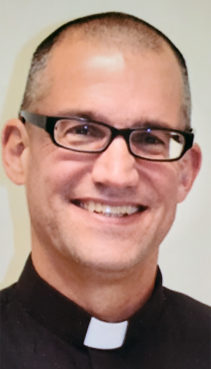 One evening in 2001, while eating pizza and drinking Killian’s red beer in the cellar of the seminary White attended, a visiting McCarrick decided to address the rumors that preceded him during one of his usually long speeches.

“He assured us in no uncertain terms that the rumors were the work of his enemies and there was no truth to it,” White said, recollecting the evening. “We believed him.”

Looking back, White said he “bought the party line at the time,” that the real problem were the priests who committed the abuse but not also those who had allowed it, and that the Catholic Church was being accused unfairly as a whole.

Years later, news reports on McCarrick revealed numerous accusations of sexual abuse, including of underage boys, and documented how the allegations had been covered up by the Catholic hierarchy and the Vatican.

To recover from the news and in an effort to find justice, White said, he “had to try and see the whole thing from the point of view of the victims.” He also began to write on his blog about the Catholic Church’s failures in addressing the sexual abuse crisis.

The blog, and the strong language it uses, ultimately led to the local bishop, Barry C. Knestout of Richmond, Virginia, asking White to shut it down. The priest defied the orders of the bishop and the two were unable to find a compromise, resulting in the bishop dismissing White from ministry in his two parishes.

White has appealed the bishop’s decision and currently remains in Richmond.

In his blog, White addresses the McCarrick scandal and its repercussions with strong and forceful language. He also accused Pope Francis of failing to do enough to inform the faithful about the cover-up.

“I just don’t feel like I can be an honest priest if I don’t desire and seek in any way I can a true reconciliation with the church for those victims of the man who ordained me,” he said. 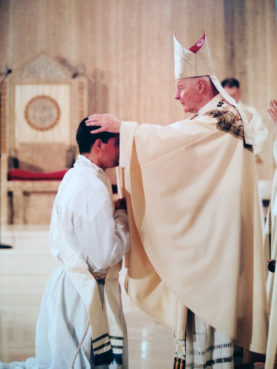 Former Cardinal Theodore McCarrick, right, then the archbishop of Washington, performs the imposition of hands during the ordination of Mark White, left, in 2003. Courtesy photo

White said a widespread culture of cover-up within the church — that neither Pope John Paul II nor Pope Benedict XVI was able to put a stop to — allowed McCarrick to rise in influence and power in the U.S. episcopacy in the late ’80s, despite the incredible harm he was allegedly doing to children and vulnerable adults.

Despite numerous conferences, commissions and summits to promote the protection of minors, the Catholic Church is “nowhere near where we need to be as far as knowing what to do,” White said.

“I think the McCarrick case is the perfect illustration where the idea of damaging the image of the hierarchy was regarded as a higher liability than the disclosure of the truth,” he said, calling it “a serious, serious problem.”

The first step toward reconciliation is for the church to offer victims the benefit of the doubt instead of reliving in circles the pattern of secrecy, cover-ups and scandals, White said.

“The church is going to move into the future with confidence and in closeness to God the more we, all of us, seek to understand the point of view of people victimized and truly identify with them,” he said.

According to the priest, when victims are able to release themselves from the lies and guilt caused by a sexual predator, it’s “the work of Jesus Christ, it’s grace, it’s a triumph of heaven,” and “the church of Jesus Christ needs to see it this way.

“Then we can do that and people who have been gravely harmed can be reconciled with the church and there can be another chapter.”