(RNS) — Some 1.8 billion people, nearly one-quarter of the world’s population, will spend this week preparing for the holiest month of the year. Beth Murphy, a filmmaker/journalist and executive producer at The GroundTruth Project, spoke with three Muslim women living in conflict zones, asking them to reflect on how their situations have forced them to adapt and what the coronavirus crisis means for their approach to Ramadan this year.

Razhan Sabah Hassan stood in line outside Shahid Ali Wali Hospital in Sulaymaniya, in northern Iraq, exchanging nervous glances with other doctors, patients and visitors, waiting to be disinfected.

When it was her turn, Hassan walked through the gate, lifted her arms and closed her eyes as a security guard approached holding a small tank in one hand and a spraying wand in the other and doused her with ethanol from the neck down.

“I am so stressed and nervous about contracting the coronavirus and transmitting it to my family members,” said Hassan, thinking about her mom, dad, brother and two sisters at home. 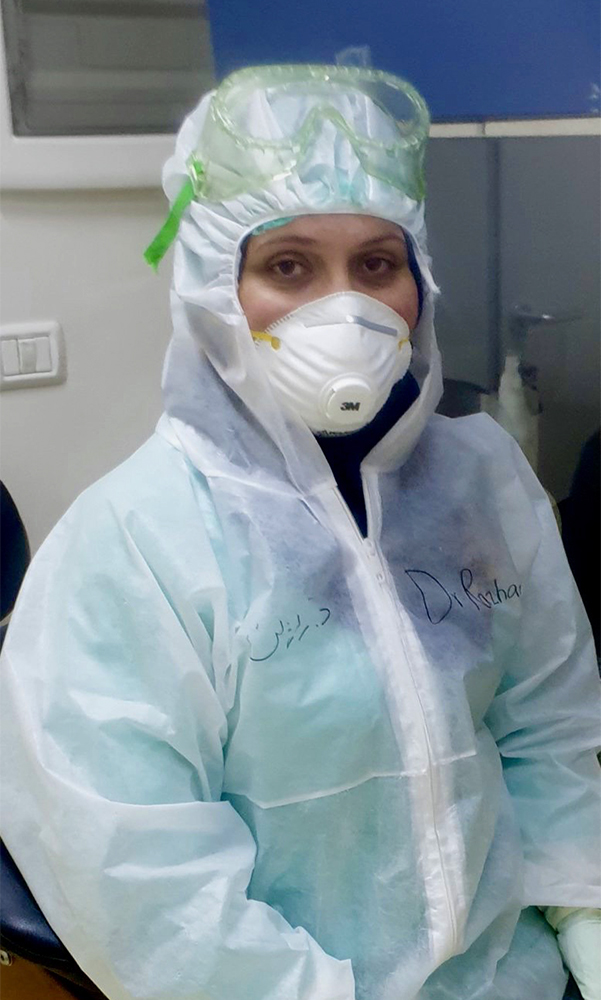 A clinical microbiologist, Hassan works in a lab on the ground floor of the hospital, analyzing about 200 coronavirus test samples a day. Above her, in beds on the second floor, are the patients she’s already deemed positive. (Though Iraq has reported many fewer cases than its hot-zone neighbor, Iran, it is suspected that the official count of 1,600 cases severely underestimates the actual number).

With every confirmation of another coronavirus case, she is reminded of childhood lessons about Ramadan — Islam’s holiest month, which begins this week, in which observant Muslims fast from sunup to sunset.

“My parents taught me that Ramadan is not only about depriving yourself of food and drink,” she said. “It’s most important to have mercy, compassion and patience — things I need in abundance right now.”

Often referred to as the “month of mercy,” Ramadan is defined by a deep spirituality, a time when Muslims reflect on their lives, refocus their priorities and seek to nourish their relationship with God through prayer and sacrifice.

Hassan was born in Halabja, an hour’s drive south and east from Sulaymaniya. She was 2 years old in 1988 when then-President Saddam Hussein, in a conscience-defying attack, dropped chemical weapons on her community, killing more than 5,000 people — mostly women and children.

“After the Halabja chemical attack, we became refugees in Iran and stayed there for several years. Those Ramadans were very hard for us because we were away from our country.”

While that experience stands as a testimony to man’s inhumanity to man, the COVID-19 crisis, she said, is proving to be an opportunity to witness some of the best in humanity.

Aziza Begham stood watch in the kitchen in Kabul, Afghanistan, as her older sister, Hanifa, made gulab jaman, a fried dough ball that dripped with rose syrup. It’s Aziza’s favorite Ramadan dessert and she wanted to make sure her sister got it just right. A trial run two days earlier hadn’t gone so well. “Too much flour,” Aziza said, laughing. 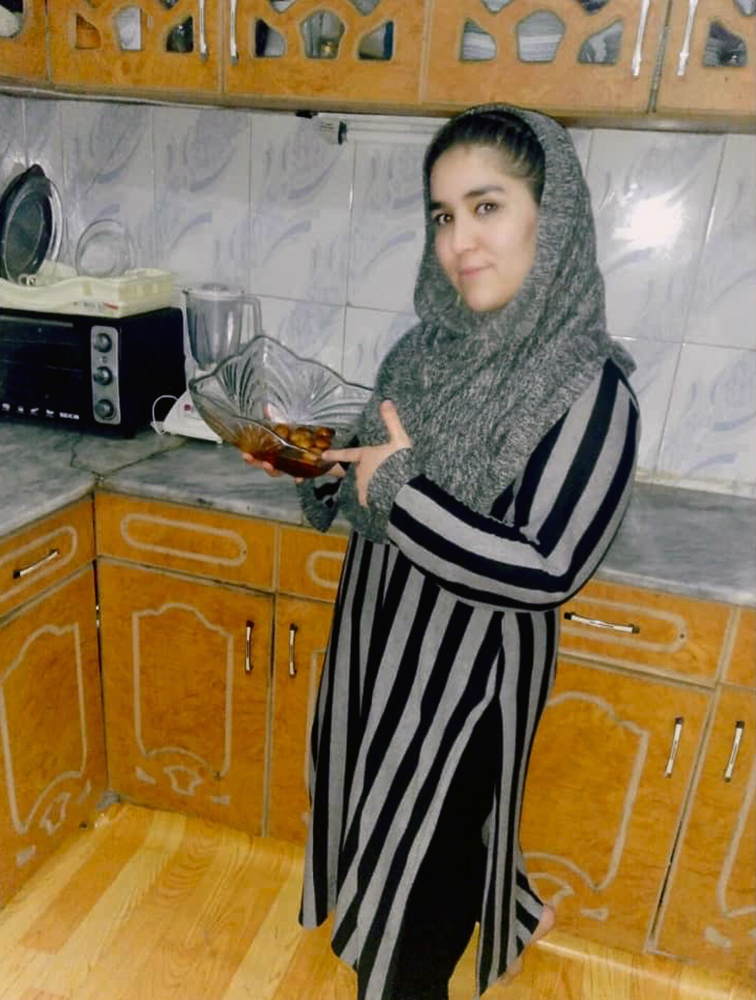 Most years during Ramadan, Begham has hosted nightly feasts at home with family and friends and attended special evening prayers at the mosque. With mosques shuttered against the spread of coronavirus, she’s unsure whether praying from home will give her the same jolt of spiritual adrenaline that large Ramadan services deliver.

“Going to pray at the mosque during Ramadan gives me mental peace, spiritual peace,” she said. “It is the best feeling in the world.”

While officials in neighboring Pakistan are bending to pressure from religious leaders, who say the spiritual benefits of having masses of people gather for Ramadan prayer outweigh the risks, in Afghanistan, where the disease has killed nearly 40 people by official counts, clerics have sent a unified message: Stay home.

The nationwide lockdown means the girls school where Begham has taught for the past decade is closed. A self-described homebody, she is enjoying her time with family and takes the dire warnings from the Ministry of Public Health to heart:  Without strict containment measures, projections show that as many as 25 million Afghans will be infected with coronavirus, and 110,000 will die — more than the total number of civilians killed by war since 2002.

“We’ve lived in a war zone for over 40 years but this time is even more difficult,” Begham said.

As Taliban insurgents have expanded their hold on the rural parts of the country in the past seven years, the economy has worsened. Today, more than half the population lives on less than a dollar a day. 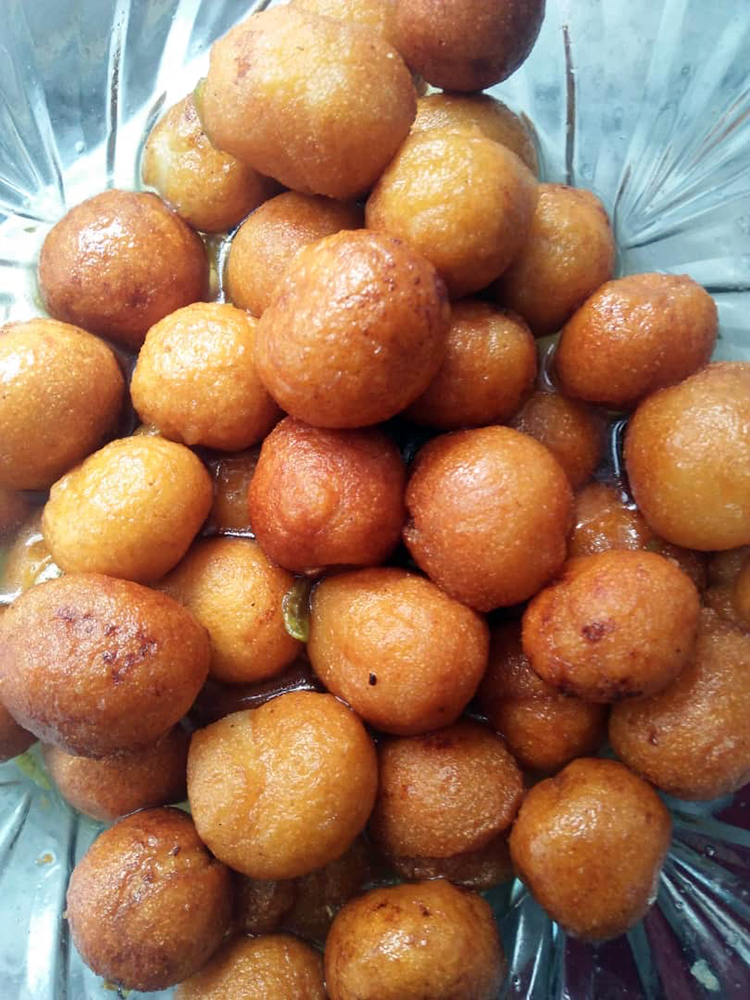 “The lockdown is so hard for the poorest of the poor,” she said. “Like my neighbor … he needs to go out every day to earn a little bit of money — like 75 cents. But the rules are really strict and because he can’t go out, he has nothing.”

For the past five weeks, Begham and her family have delivered meals and groceries to his doorstep.

The charity and generosity that characterize Ramadan got an early start this year, Begham said, because of the pandemic. With no formal social welfare system in the country, the most vulnerable depend on the selflessness of others — a reality that hasn’t always jibed with the self-preservation needed in such a volatile society.

“Because just walking outside can feel like life or death, I wondered if kindness was gone. But I get so emotional now seeing what is happening.”

Begham scrolled through her Facebook feed, detailing other acts of kindness being documented across the country. Tailors making thousands of masks and distributing them to the poor and homeless. Landlords waiving rents on shops and homes until the crisis is over. Wedding hall owners offering to transform their cavernous rooms into hospitals.

“What we’re taught,” Begham said, “is that Ramadan is the time to make positive changes in your life and keep them going beyond the 30 days … for the rest of the year, the rest of your life. I feel like it’s happening already and that somehow this is the least and most Ramadan ever.”

When Naila Azam Alsaqqa first heard about the novel coronavirus, she was terrified. Living in the Gaza Strip, one of the most densely packed places on the planet, she implored her husband and three children repeatedly to wash their hands and began making homeopathic remedies — mixing lemon, ginger and cinnamon — to ward off sickness.

For Alsaqqa, and the roughly 2 million Palestinians living under siege in Gaza, the idea of lockdown was nothing new. They’ve lived under an Israeli blockade, designed to stop the flow of weapons and other support for extremists, since 2007. The potential for senseless death during Ramadan was also nothing new. Last year, Israeli bombings left hundreds of families homeless at the start of the holy month. In 2014, too, Ramadan was defined by rocket attacks and airstrikes. 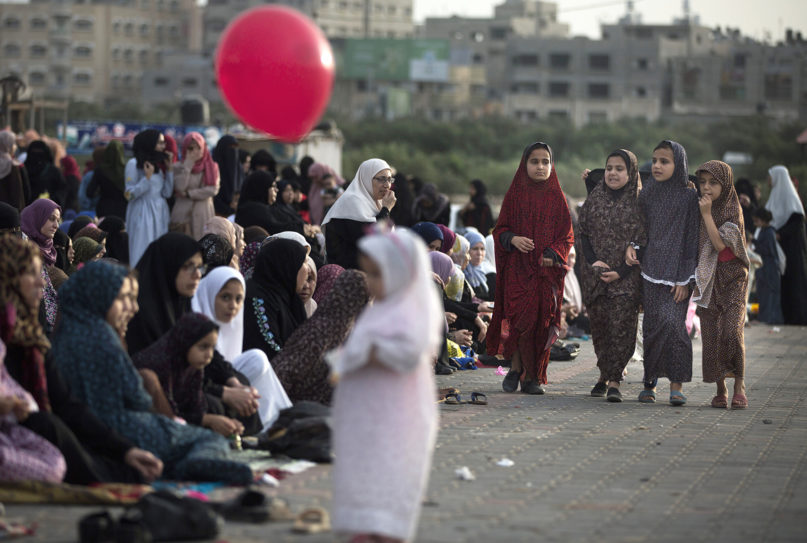 “During that time,” Alsaqqa said, “when we would break our fast, we’d hear the missiles landing and know that whole families were being killed.”

Still, no matter how painful things were in the past, she could always count on spending time with family and friends. That’s why, she said, “this Ramadan isn’t like any other.”

She recalled years when children gathered to light traditional lamps and big beach picnics were held along the Mediterranean Sea after the sun had set. Not being able to do these things fills her with a sense of loss. But perhaps, she said, there is also an opportunity. 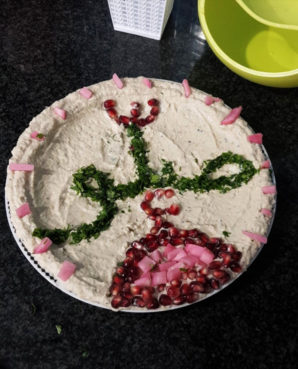 Naila Azam Alsaqqa prepared a plate of Mtabal and wrote ‘pray’ on it. “I made it during Ramadan last year because my girls were getting behind on praying,” she says. “I put the word ‘pray’ on it because they really love Mtabal, and I wanted to encourage them to pray.”

As this global crisis magnifies social, political and economic inequalities, it gives societies — and families — a chance to do things differently. Better. What if when coronavirus ends, she mused, life doesn’t go back to “normal”? What if there’s another possibility?

Her questions echo what optimists the world over are thinking about what can be gained by this extraordinary moment in history — especially for the most vulnerable and disenfranchised.

Surrounded by her family all day, every day, when she’s used to being home alone, Alsaqqa is driven by a renewed sense of purpose.

“Before, my days were empty,” she said. “Now, everyone is here with me in the house.”

In short, she feels needed. And seen. This could be a turning point, she said, in building respect for women’s unpaid labor.

“I believe that after all the husbands who are stuck at home during coronavirus see how hard women work and what we deal with psychologically, there will be more appreciation for women and the work we do at home. They’ll be able to see with their own eyes how hard it is.”

In this way, she said, coronavirus reveals one of Ramadan’s most important lessons: “God takes some things, but he gives us other things.”

Manelle Dridi and Dana Hameed contributed to this story.

(Beth Murphy is the founder of Principle Pictures and executive producer at The GroundTruth Project. She is on Twitter at @BethMurphyFilm. This story is part of a collaboration between The GroundTruth Project and Religion News Service, exploring how faith communities around the world are adapting to COVID-19, produced with support from the Henry Luce Foundation.)