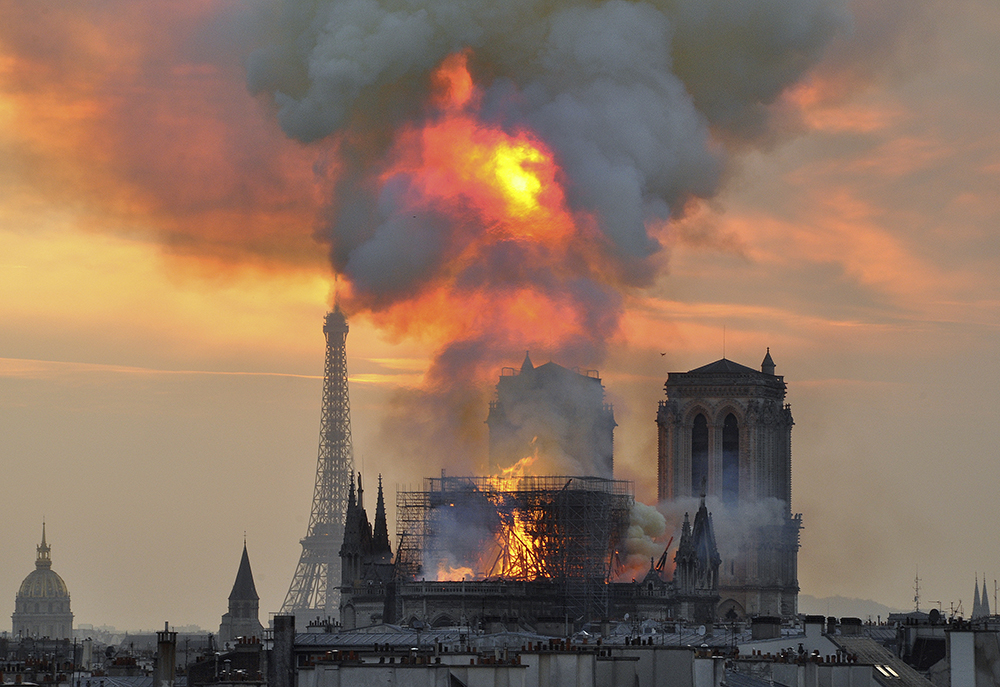 Flames and smoke rise from the blaze at Notre Dame Cathedral in central Paris on April 15, 2019. An inferno that raged through the cathedral for more than 12 hours destroyed its spire and its roof but spared its twin medieval bell towers, and a frantic rescue effort saved the monument's "most precious treasures," including the crown of thorns purportedly worn by Jesus, officials said. (AP Photo/Thierry Mallet)
April 24, 2020
Claire Giangravé

(RNS) — One year after the Cathedral of Notre Dame was nearly destroyed by a fire, its future remains uncertain. Prominent voices in France continue to argue about what should happen to the medieval gothic structure once its complex reconstruction is completed.

The citizens of France and the entire world watched with terror as the roof and steeple of the landmark cathedral collapsed from the blaze on April 15, 2019, even as firemen and art experts worked tirelessly to salvage the historic treasures inside.

In the aftermath of the blaze, French President Emanuel Macron promised his people that “The Old Dame” of Paris would be rebuilt in time for the 2024 Summer Olympics hosted by the French capital. The COVID-19 pandemic necessarily put a halt on the efforts in mid-March, but reconstruction is scheduled to resume next Monday (April 27).

Yet Notre Dame remains under fire. Architects and restorers in France cannot agree on the style of the renovations, while historians and prelates debate its soul. Once the debris is removed, the roof rebuilt and the stained glass is cleaned, what will be the purpose of this symbol of France and the Catholic faith?

“What cathedral should be built for the XXI century?” asked Bishop Michel Aupetit of Paris in a reflection recently published in the French Catholic paper La Croix.

“What it is has always been due to the meaning behind its construction: to praise God and the salvation of humanity. If it doesn’t remain faithful to itself, it will lose its soul.”

Aupetit has made the case that, once restored, Notre Dame should remain a place of worship and prayer. He said the cathedral is a “common home” where anyone may find solace in tragedy and gratitude in moments of happiness.

To further make his case, Aupetit celebrated mass in the cathedral on Good Friday, the day commemorating the crucifixion of Jesus and leading up to Easter. During the ceremony, the bishops and a few others respected the safety distancing imposed to prevent the spread of the coronavirus. 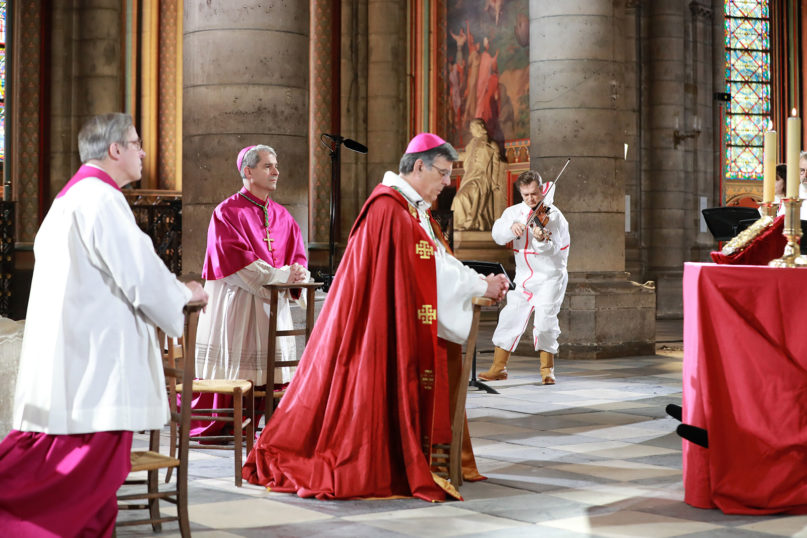 Notre Dame de Paris Cathedral's rector Patrick Chauvet, from left, Auxiliary Bishop of Paris Denis Jachiet and Archbishop of Paris Michel Aupetit attend a ceremony to celebrate Good Friday, while violinist Renaud Capucon performs, in a secured part of Notre Dame de Paris Cathedral, Friday, April 10, 2020, in Paris. Although still damaged and scarred by fire, Notre Dame Cathedral has — if only for an instant — come back to life as a center for prayer in a Paris locked down against the coronavirus. (Ludovic Marin, Pool via AP)

Aupetit venerated the crown of thorns, a precious relic for Christians, which was miraculously salvaged from the blaze.

The bishop’s proposal is one of many that have begun to surface for Notre Dame’s next life. The cathedral is a property of the French state, which it shares with the city of Paris and offers to the Catholic Church in perpetuity.

The French architect Jean-Marie Duthilleul has suggested that visitors coming to Notre Dame should have an opportunity to enjoy it without the wooden pews blocking their passage. He has argued that without the seating, visitors could move around more easily and be immersed in the majestic and transcendent art and architecture.

“Notre Dame is a physical experience and you must be able to experience it,” Duthilleul, who has also worked on projects at the Louvre and the cathedral itself, told La Croix.

“Today, it would be necessary to remove a good part of the seats from the nave to be able to experience the contemplative joy amidst the architecture of the place,” he said, adding that the area surrounding the cathedral could be transformed into a large museum documenting the “rebirth” of Notre Dame.

Historian and writer Michel Pastoureau also took a jab at trying to imagine a new role for the historic cathedral. In an essay also published in La Croix, he stated that Notre Dame has now fallen prey to tourists, who, unlike the pilgrims of the past, only visit to take pictures and selfies.

He said his first inclination was to leave the cathedral to the faithful, but upon realizing the impossibility of this plan, he offered another, more divisive alternative.

“This is the second solution: not to expel the tourists but to expel the faithful,” the Catholic historian wrote. “To do this, we would have to deconsecrate Notre Dame and transform it into a museum.”

This statement caused backlash from French Catholics, leading the historian to later clarify that his remark was made in anger against the tourists who crowd the cathedral and the local authorities who put profit over culture.

According to Pawel Clapak, an art historian and tour guide in Paris, the function of the cathedral as a place of worship will likely remain unchanged.

It will remain "a place of worship plus a historical monument to be visited by people of any faith as the cultural heritage of France," Clapak told Religion News Service on Friday (April 24).

For the Parisian, it's still too soon to start thinking about what will happen after restoration is complete.

"They have not even decided yet if they are going to alter the architecture of the building and make modern additions or if they will bring the structure to the original shape," he said.

The process of restoration on Notre Dame has only just begun, with work being pushed back due to bad weather conditions and the coronavirus pandemic. Professionals still have to remove the large amount of toxic lead that fell from the roof and the molding scaffolding from the structure.

Under tight deadlines and high-profile debates, Notre Dame’s future remains on the line. This is nothing new for “The Old Dame,” which has seen its fair share of destruction, arguments and rebirth in its almost 1,000-year-old history.

“The cathedral is a ship traversing history,” Aupetit wrote. “It collects the memory of our fathers, turns our eyes to the hope of the Kingdom. It invites man to a pilgrimage and prevents history from being trapped in the illusion of an early salvation, of a progress that frantically runs toward nothing.”