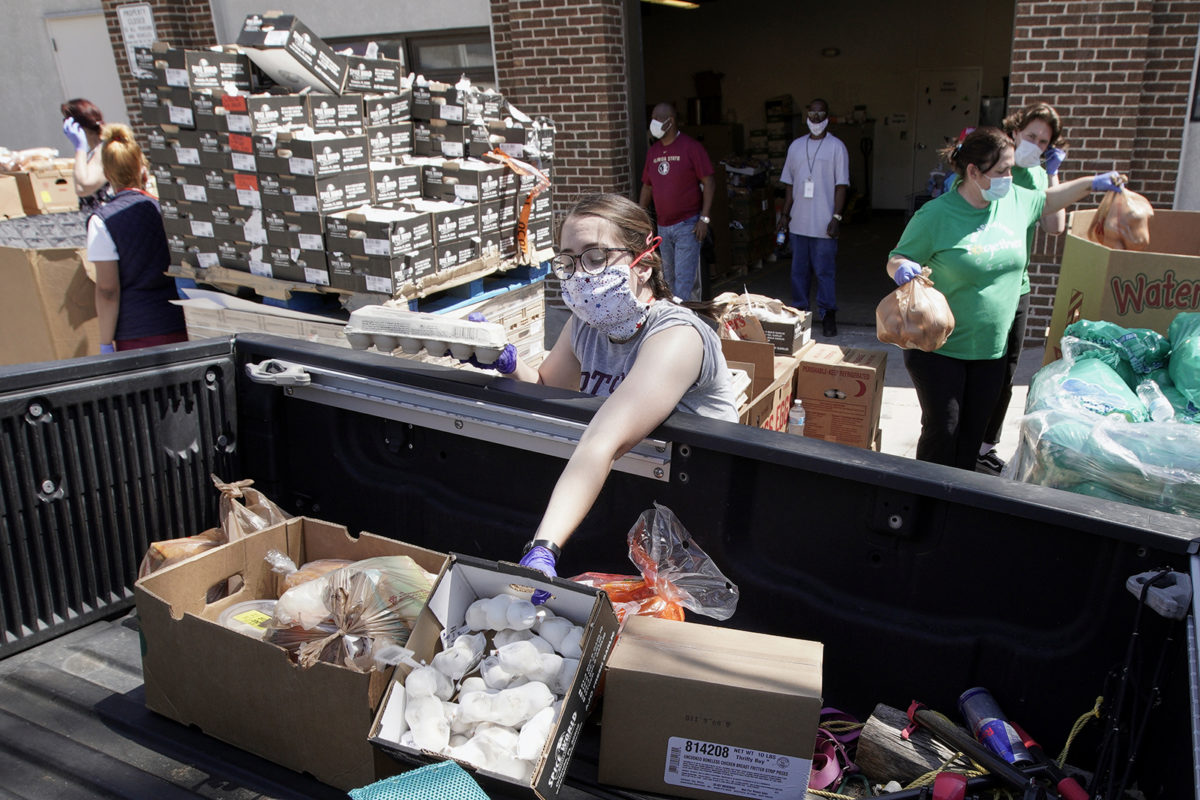 Together Omaha food pantry workers load supplies into a vehicle driving up to the pantry in Omaha, Nebraska, Thursday, April 23, 2020. The number of Nebraska residents seeking unemployment benefits for the first time dropped again last week but is still far higher than usual as businesses struggle with the fallout from the coronavirus. (AP Photo/Nati Harnik)
April 24, 2020
Jim Wallis

(RNS) — Nobody wants our society, economy, government, schools or our families to stay on lockdown. Everybody wants our lives to reopen. But in order to do that in a way that protects health and lives, three biblical principles are necessary: truth, unity and solidarity.

U.S. counties that are majority-black have three times the rate of infections and almost six times the rate of deaths as counties that are majority-white. Those numbers are just as stunning as the 45,000 U.S. deaths from the coronavirus — a number that is projected to increase and exceed the number of Americans who died in the Vietnam War, numbers that forever changed my life.

Lower-income workers of all races and ethnicities who are now considered “essential” are at a higher risk of contracting the virus. Low- and middle-income elders in nursing homes are dying at the highest rate, accounting for nearly a fifth of all U.S. deaths.

Race and poverty have become pre-existing conditions for COVID-19. The entire faith community must use its prophetic and pastoral voice to emphasize this truth.

Here is who is most at risk:

Jesus said, “You will know the truth and the truth will set you free.” In this time of pandemic, not knowing or abiding by the truth will put you and your loved ones in physical danger. The president’s daily White House briefings have become a national battleground for the truth. I watch them almost every day, at a growing cost to my spirit and soul. The doctors and scientists, often with heads bowed, fight every day for the truth, knowing that so many lives are at stake, while the president turns briefings into political rallies to boost his ego.

These despicable reality TV shows, disguised as health briefings, have once again exposed that Donald Trump is morally incapable of telling the truth. This is an anti-truth, anti-life president, and the only thing more despicable than his deadly untruths is the continuing silence and support of the white evangelicals who have become his court chaplains and complicit truth deniers. 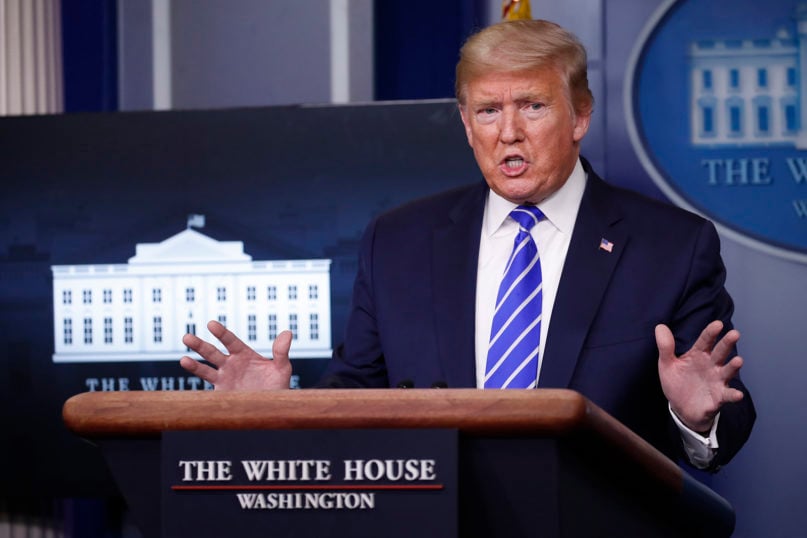 One practical truth for the safe and healthy reopening of our society is the central importance of widespread testing and tracing, which the Trump administration maintains is not its responsibility. While Trump touts overall testing numbers, the United States fails when it comes to testing on a per-capita basis. To say otherwise is indeed a lie.

I talked this week to Hana Kim, pastor of one of the largest churches in Seoul, South Korea. Pastor Kim says everyone in South Korea who has been anywhere near someone who contracted the coronavirus has been tested; 300 people in his church have been tested. Anyone who wants a test can have one. We know that is not true in the U.S., and medical experts agree it is key to returning to work or school safely. That is simply the truth.

One must ask why the president keeps lying, even amid a pandemic, when so many lives are at stake. Trump even surprised his own officials in a late-night tweet this week, writing that he would be suspending all immigration, leaning yet again on his favorite bogeyman in order to play to his base amid dropping poll numbers. It’s another example of the ugly politics that he has consistently used to divide us, even in a time of pandemic where unity is most essential. Immigration has nothing to do with this virus. That is a dangerous political lie.

Truth about the trajectory and spread of virus cases, the rates of recovery or death, and the critical knowledge that comes from testing and tracing must be our morality-centered criteria for reopening in every community in the country. 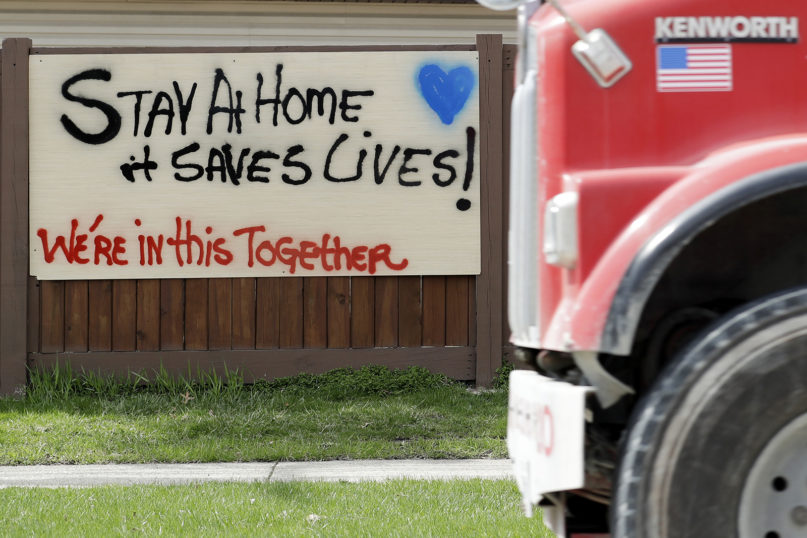 We either believe “we are all in this together,” as the White House briefings say every day, or we do not. Will politicians decide their strategy for this disease based on political and demographic calculations or on the basis of public health, humanitarian and moral criteria that treat every person made in the image of God equally?

Let’s be honest: The protests we’ve seen break out in state capitals — all aimed at Democratic governors, typically in key electoral states — are the result of manufactured outrage funded by wealthy interest groups. In an effort to feed these astroturf protests, Trump stokes the fires of his base by tweeting "LIBERATE MICHIGAN," "LIBERATE MINNESOTA," "LIBERATE VIRGINIA," and by accusing Virginia of wanting to take away people’s guns because of the virus. In turn, his base — white protesters with American and Confederate flags, MAGA hats, and automatic weapons — show up, and the media plasters the images of outrage across its coverage.

Will this ultimately become a partisan pandemic, with political calculations overriding the crisis in public health? Do all our citizens count equally in this health crisis, or will they count more as members of one political base or another? Are we equally human in our moral and spiritual value, and equally valuable as citizens of a democracy? Or will health and human decisions be impacted by political calculations? Unity — spiritual and political — must be a criteria for when and how we open back up.

How to show solidarity

Perhaps the most alarming talk is from those who have actually said that lives may have to be sacrificed for the sake of the economy, that some older people may have to die to save the economic order. Pundits on the right have said that, some talk show hosts have said that and some corporations and business leaders have suggested that.

Even worse, some governors are suggesting that. Georgia Gov. Brian Kemp decided the reopening of his state this week would include gyms, bowling alleys, barber shops, nail salons and tattoo parlors despite the impossibility of necessary social distancing. The mayor of Las Vegas wants to reopen the Strip.

News reports this week say the White House coronavirus task force members could not publicly defend the way-too-early actions of the Georgia governor and pleaded with Trump on Wednesday to agree (which, gratefully, he finally did). Florida Gov. Ron DeSantis has already reopened some beaches. Workers at meat-packing plants in Colorado, Kansas and elsewhere, many of them immigrants, are coming down with COVID-19 in increasing numbers, and many fear for their ability to do their jobs safely in sometimes crowded conditions. Protecting the vulnerable is not on the agenda.

So far, the stimulus bills have provided much-needed single paychecks to millions of people, crucial help to small businesses and vital aid to hospitals. But a critical increase in nutrition help (Supplemental Nutrition Assistance Program, or SNAP) is likely the best way to directly help feed people without adequate work and stimulate the economy, but it has yet to be included in the bipartisan bills. Nor has offering immigrants crucial benefits or addressing the needs of Native American communities or releasing undocumented people in dangerously unhealthy detention centers or older and nonviolent incarcerated people from overcrowded prison facilities.

Today, in a conversation with the Rev. Freddy Haynes, the nation’s foremost revival preacher applied the Rev. Martin Luther King Jr.’s famous quote that “injustice anywhere is a threat to justice everywhere” to the present COVID moment. He says, “Infection anywhere is a threat to infection everywhere.” The great wisdom of our faith traditions is that the protection of the vulnerable is not only the right thing to do but is the best way to protect all of us.

(Jim Wallis is president, founder and editor in chief of Sojourners and author of "CHRIST IN CRISIS: WHY WE NEED TO RECLAIM JESUS." The views expressed in this commentary do not necessarily reflect those of Religion News Service.)