In the Church of Jesus Christ of Latter-day Saints, not having access to the sacrament (our Sunday communion of bread and water) is generally a punishment. It means you’ve done something that is against the commandments. Your bishop may withhold access to the sacrament for a certain number of weeks or months so you can reflect on your sins and repent of them.

If, after a period of denial, you have repented of what you did wrong, then your access is restored and you can once again partake.

That’s how it’s supposed to work, anyway. This spring, I and several million other women have lost access to the sacrament, but it’s not because we have sinned.

This withdrawal is no one’s fault. It’s the fallout of this terrible Covid-19 pandemic, and the church is merely doing the best it can to stem the spread of the disease. In March, the church suspended all in-person gatherings and shuttered its chapels around the world. We haven’t had church meetings in two months, and there doesn’t seem to be an immediate plan to reinstate them. Where I live, we’ve had some helpful Zoom meetings for Sunday School, Relief Society and priesthood, but no sacrament meetings. And I just heard last night that our ward has been instructed to stop holding even the virtual Relief Society and Sunday School meetings, so as not to conflict with “home-centered worship.”

Closing our in-person meetings is the right thing to do, and we are being good citizens of the world. But the two-tiered way we are addressing the sacrament would feel better to me if we were all in it together.

Here’s what the church has said to those of us who do not have a priesthood holder at home:

“In unusual circumstances when the sacrament is not available, members can be comforted by studying the sacrament prayers and recommitting to live the covenants members have made and praying for the day they will receive it in person, properly administered by the priesthood.”

I can certainly study the prayers, commit to living my covenants, and wait for better times. I don’t object to any of that. I do question the assumption that mine are “unusual circumstances.”

According to the 2016 nationally representative Next Mormons Survey, here is the breakdown of marital status among U.S. women who are members of the Church of Jesus Christ of Latter-day Saints: 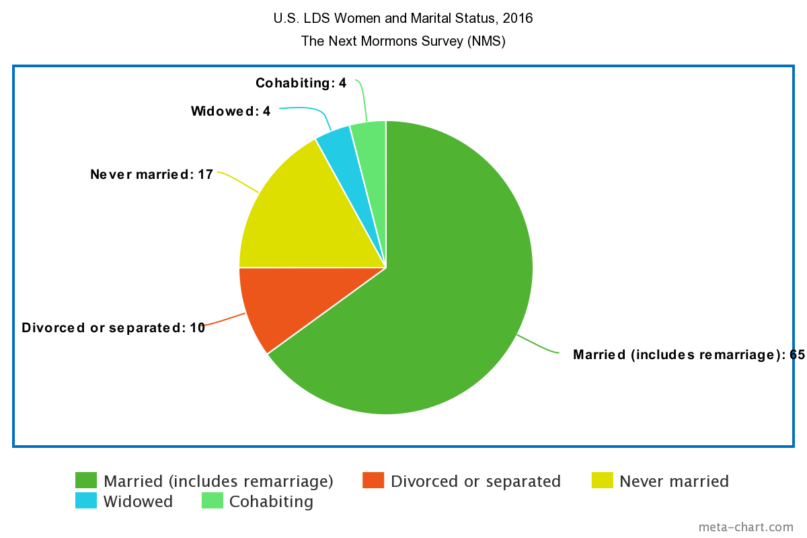 So basically, two-thirds of U.S. Mormon women are married, either to their first spouse or a subsequent spouse. That means that at least one-third of adult women who are active in the church don’t currently have a “priesthood holder in the home” just by virtue of their marital status.

But wait, that’s not the full story. For my part, I am married, but not to an LDS priesthood holder, since my husband belongs to another church. How many married women are in a situation like that?

Only about 60% of married Mormon women in the U.S. say their husbands are regularly involved, or “very active” in the LDS church. While that’s not directly equivalent to their husbands holding priesthood (presumably, some men in the “somewhat active” category might also be interested in administering the sacrament to their families at home during the pandemic), it’s the closest figure we have.

Altogether, taking the fact that 65% of U.S. Mormon women are married but only some of them are married to “very active” church members, the big picture looks like this among all US LDS women:

And that’s still not the full story. These statistics are only from the United States, where Mormonism enjoys its longest history and has the most established presence. In other nations, inactivity rates in the church are even higher, part-member families are more common, and there are even more women without a priesthood holder in the home.

In short, these are not “unusual circumstances”; they are actually more common than the privileged situation enjoyed by the 39%. Even in the United States, where the church has a firmer footing than it does anywhere else in the world, there are more women who do not have access to the priesthood in the home than who do.

I know this situation of sacrament denial is only temporary. And I have had a couple of well-intentioned men in my area offer to bring the sacrament to my house, which I appreciate. But there’s no way in heck I am going to endanger anyone’s health over this by having them come inside, and the idea of them dropping the sacrament on the doorstep before fleeing misses the theological point of communion, which is in fact communion.

But the wonder of modern technology means that sharing communion together at the same time does not require us to be in the same room. If we are a people who can administer vicarious ordinances to the dead so that the deceased can have what’s necessary for eternal exaltation, we can surely administer a virtual ordinance that is intended as a remembrance of Jesus’ death but does not impart anything necessary for our eternal life. Our words of institution in the sacrament prayer say that we eat and drink “in remembrance” of the body and blood of Jesus. We’re enacting a sacred holy memory.

If death cannot separate us or invalidate our most sacred ordinances, we should also be able to conduct a sacrament meeting without being in each other’s physical presence. There is no theological reason why I should not be able to see and hear a priesthood holder blessing the sacrament in an online service and then consume the elements privately in my own home, knowing as I do that many other Saints around the world are doing so alongside me.

At the very least, perhaps this pandemic can help us forever lay to rest the specious argument that “women don’t hold the priesthood, but they have full access to its blessings.” I do not have full access to its blessings even in the best of times, and the pandemic is far from the best of times. Right now, I can’t take the sacrament on Sundays while other families are doing so. And if/when I get sick with Covid-19, there is no one in my family who is authorized to give me a priesthood blessing of healing.

Withdrawing the sacrament from my life was not intended to be a punishment, but it sure feels like one sometimes.