(RNS) — Another day, another humiliation for the pro-life movement.

But on special days, critics argue that the movement is just a cover for darker motives, rooted in political opportunism and racism, its moral integrity compromised by that time when evangelicals (and even Southern Baptists) were pro-choice.

Last Friday (May 22) was another of these special days. That’s when FX premiered the documentary “AKA Jane Roe,” which covers the life of Norma McCorvey, better known as the “Jane Roe”of the 1973 Supreme Court case that legalized elective abortion.

The film depicts how, over the course of a difficult life that began in poverty and abuse, McCorvey went from being a young woman desperately seeking an abortion, to abortion clinic worker and abortion rights advocate, to Christian convert and anti-abortion speaker. The documentary’s much-heralded bombshell (given ample media coverage in the lead-up to the premiere) was McCorvey’s “deathbed confession” that the pro-life chapter of her life was all an act.

But once the issue had been framed in terms of a pro-life movement “always built on lies,” as one headline had it (ignoring the fact that Roe v. Wade itself was built on the lie that Norma McCorvey had been impregnated by rape), such details seem like hairsplitting. Another news story crowed that the documentary “exposes the immorality” of the movement’s conservative base.

While the abortion rights champions who appear in the film don’t come out smelling like roses, pro-life leaders are portrayed as downright devilish. From among dozens intimately connected with McCorvey over two decades, the documentary cast two leaders as perfect caricatures. One is a Bible-kissing Flip Benham, who cattily responds to McCorvey’s “confession” by saying that getting paid to advocate for a view is little different from selling one brand of car rather than another.

Benham’s foil is Rob Schenck, a cerebral, articulate and remorseful former pro-life leader who himself underwent a three-part conversion that subtly parallels McCorvey’s: pre-pro-life, pro-life, pro-choice. He indulges the documentary’s intended audience’s sense that thoughtful people who are intelligent enough will, of course, eventually become pro-choice. 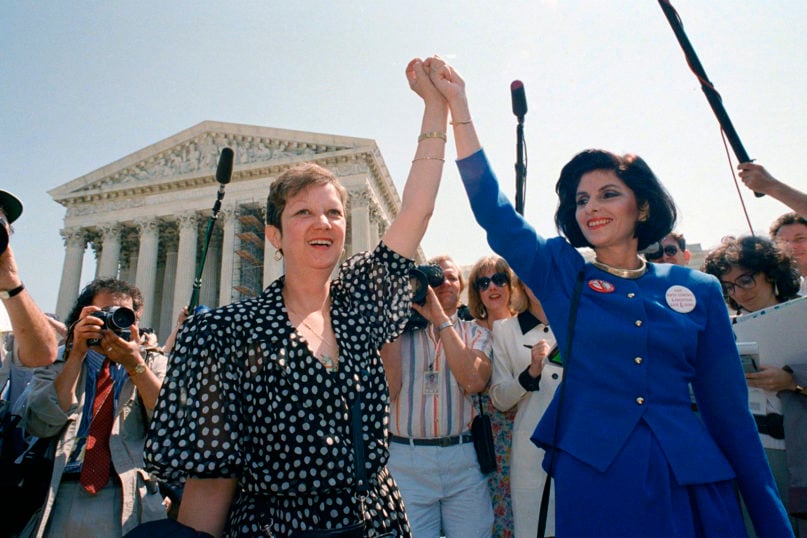 In this April 26, 1989, file photo, Norma McCorvey, Jane Roe in the 1973 Roe v. Wade court case, left, and her attorney Gloria Allred hold hands as they leave the Supreme Court building in Washington after sitting in while the court listened to arguments in a Missouri abortion case. AP Photo/J. Scott Applewhite, File)

The narrow story the film tells about the pro-life movement — which embraced, platformed and paid McCorvey after she became a Christian and renounced abortion — is essentially that its leaders were too cunning, too dishonest or too dumb (and probably all three) to confirm or insist upon the authenticity of McCorvey’s testimony.

Yet, paradoxically, humiliation is the essence of being pro-life.

St. John Chrysostom says that humility is the “mother, and root, and nurse, and foundation, and bond of all good things.” The word humility comes from the same word as human and means earth or ground. Humility means that we “all come from dust and to dust all return.”

To be humble means, simply, taking a truthful measure of oneself, valuing oneself neither too much nor too little, against an eternal standard. It is the acceptance of our humanity and the humanity of others. Humiliation is nothing more, and nothing less, than taking a proper measure of ourselves as creatures made to bear God’s image and one another’s burdens.

Thus, humility does not give us an excuse to not repent of our wrongs, or not learn from our mistakes, or not listen to the critics. Because the fact is — and we didn’t need the documentary to show us this — the pro-life movement is riddled with sin and error.

Whereas the early church began the pro-life movement by rescuing abandoned infants, assisting mothers and advocating for the dignity of all human life from outside the pillars of political power, the movement today has too often been taken in and used by political powers for ends that have not served life. Or have served only certain kinds of lives. This is to our shame.

But the core pro-life principle — that human life is worthy of being protected — is good. This is the humble truth no matter which personalities on which platforms say so — or don’t.

(Karen Swallow Prior will become research professor of English and Christianity and culture at Southeastern Baptist Theological Seminary this fall. Her most recent book is “On Reading Well: Finding the Good Life through Great Literature.” The views expressed in this commentary do not necessarily reflect those of Religion News Service.)