ARCTIC VILLAGE, Alaska — Arriving home on one of the last regular flights before pandemic restrictions went into effect in mid-February, Sarah James got to her house to find two caribous worth of meat in her freezer.

Since flights have become intermittent to this indigenous village 100 miles north of the Arctic Circle, said James, a leader of the Gwich’in Athabascan people, the store periodically runs out of basics like meat and sugar. Subsistence hunting, fishing and gathering have been more critical than ever.

To ensure that Arctic Village’s population of fewer than 200 have enough to eat, the village council has designated several members to hunt caribou, the Gwich’in’s traditional staple. Someone had also taken time to make sure that James’ freezer was well stocked.

If the pandemic has deepened the sense of isolation for the 8,000 or so Gwich’in, sprinkled across northeastern Alaska into Canada, it has also emphasized the importance of the tribe’s traditions and its profound spiritual connection to the homelands that sustain the caribou and other wildlife on which they depend. 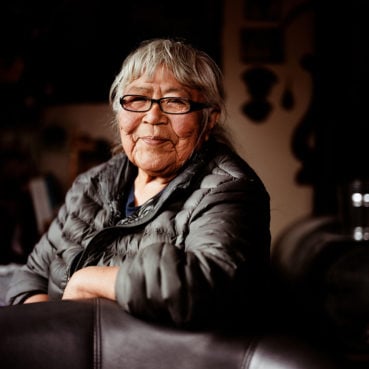 Young people, James said, suddenly understand the traditional value of sharing as they deliver fish and other foods right to elders’ doors so they don’t risk exposure to the virus.

While nobody in Arctic Village so far has been known to have COVID-19, medical care is precarious — at the small clinic there is no running water, and it’s staffed by a health aide who is a trainee and a traveling physician’s assistant who comes every couple of weeks. But the Gwich’in have long responded to multiple threats to their life and land by reinvesting in their people’s place as protectors of their historic home.

For much of the past generation, the biggest threat has been an oil industry intent on gaining access to one of the country’s last untapped petroleum reserves. In 1988, a year after the Reagan administration recommended development of the Alaskan coastal plain, the Gwich’in Nation held its first gathering in more than 100 years in Arctic Village and established the Gwich’in Steering Committee. The non-profit is commissioned with educating the world about the threat to the refuge.

James became one of the tribe’s first spokespersons, traveling to Washington to lobby Congress and around the world to build a coalition of opposition to Reagan’s plan. She still leads the legal fight against Big Oil and the federal government with partners like the Native American Rights Fund, while the steering committee pursues an education and influence campaign through traditional and social media, with support of environmental organizations. 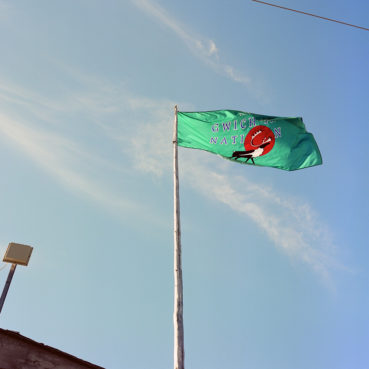 Since the Gwich’in began their fight, too, the disposition of the coastal plain, which includes the 19 million-acre Alaskan National Wildlife Refuge (ANWR), almost the size of South Carolina, has become a national debate. In the mid-2000s, it helped force a government shutdown under President Bill Clinton. In 2015, the Obama administration proposed designating 1.25 million acres of the coastal plain off limits to development, along with more than 10 million acres elsewhere in Alaska, but the proposal went nowhere in a Republican-controlled Congress.

Since September of last year, when the Trump administration announced it would carry out its own plan to open the coastal plain to drilling, the Interior Department has been weighing a sale this year of oil leases on the 1.56 million acres in ANWR. The effort has so far survived the recent plunge in oil prices.

“I don’t think the bidding would be driven by today’s prices,” Interior Secretary David Bernhardt told Bloomberg in mid-May. “I don’t generally believe that decisions on whether or not to bid in a lease sale are really driven by the near-term dynamics.”

But for the Gwich’in, the fight is as much a spiritual and cultural one. The tribe’s defense has prompted a cultural renaissance in Alaska’s rural villages. Young Gwich’in have turned to their elders to recapture indigenous languages. They are taking up traditional arts and crafts and studying food preservation techniques like smoking and drying. Tribal gatherings open and close with prayers, drumming, dancing and ceremonies that the young Gwich’ins’ grandparents were discouraged and even punished for performing in colonial days.

James’ leadership is representative of this rebirth, particularly of the Gwich’in matrilineal society that Alaska’s white colonizers once tried to end.

Born the youngest of nine children in Fort Yukon in 1944, James’ earliest memories are of fishing and hunting with her family. “Most of the time we were out on the land,” she recalled. She remembers snowshoeing alongside a team of sled dogs and feasting on fresh caribou. “Us kids, we had a choice to pick out the caribou that we’re going to cook ourselves,” she said. Artwork is displayed at a community center in Arctic Village, Alaska, in June 2019. Photo by Brian Adams

She attended boarding school in southeast Alaska and Chemawa Indian School in Salem, Oregon. In 1967, a Bureau of Indian Affairs program that trained her for secretarial work brought her to San Francisco, where she lived in the Mission District at the height of the counterculture movement. Two years later she was among the 89 protesters, most of them indigenous Americans, who occupied Alcatraz Island in San Francisco Bay.

When her father died in 1970, James returned home and for the next decade worked in the school and as a health aide in Arctic Village. She took part in tribal government, and, still haunted by the waste and environmental damage she had observed in the Lower 48, became determined to protect her tribe’s resources.

Today the view from James’ cabin window, just beyond the Chandalar River and a grassy expanse of tundra, rivals scenes in national parks. Over a sea of spruce trees, rocky outcroppings create a natural gateway into ANWR.

“We call that place “Iixhik Gwats’an Gwand’aii Good’lit,” or “The Sacred Place Where Life Begins,” James told me when I spent time in Arctic Village last summer. In recent years, James, now in her 70s, has passed much of the work on to younger women. 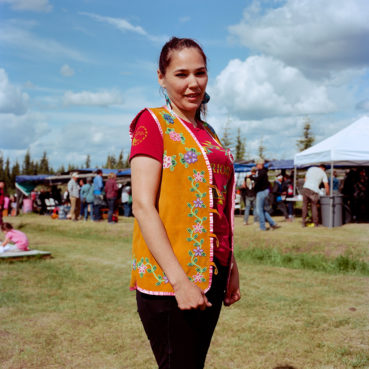 Bernadette Demientieff, 42, leads the Gwich’in Steering Committee and is planning a virtual gathering this summer billed as “Together Apart” that will include inspiring traditional music performances and talks by elders.

Like James, Demientieff connects the Gwich’in cause to larger concerns about the environment. “My focus is on the Arctic National Wildlife Refuge, but we are also witnessing climate change and food security threats,” she said. The warming trend has caused the caribou to shift their migratory routes, making it more difficult for Gwich’in to hunt them.

“For over 40,000 years we’ve migrated with the herd,” she said. “Our ancestors settled us on that route.”

In an email, Karlin Itchoak, Alaska state director of the Wilderness Society, said, “Indigenous leaders such as Sarah and Bernadette are hugely important figures because they have devoted so many years and so much tireless effort to protect this sacred place for future generations.”

In an environmental impact statement issued last fall, the Bureau of Land Management admitted that drilling on the coastal plain — home to polar bears, hundreds of species of migratory birds and other sensitive plants and animals — could exacerbate species loss that is already accelerating due to climate change. More recently, several major banks announced they would not lend to companies who bid on the leases.

But with Alaska mired in a budget crisis that the pandemic will probably only worsen, the state will likely seek to keep up pressure to open it up to drilling. With Alaska Senator Lisa Murkowski chairing the Senate’s Energy and Natural Resources Committee, along with the sub-committee that decides spending for Interior Department programs, those in the development camp have high hopes.

The oil companies point to their record of operating responsibly elsewhere along Alaska’s north coast and claim that development will have benefits for the Gwich’in. “The life expectancy of the people from the North Slope has increased since oil and gas development, and the region has the ability to fund quality education, health care and other critical services,” said Kara Moriarty, who heads the Alaska Oil and Gas Association, in a statement. 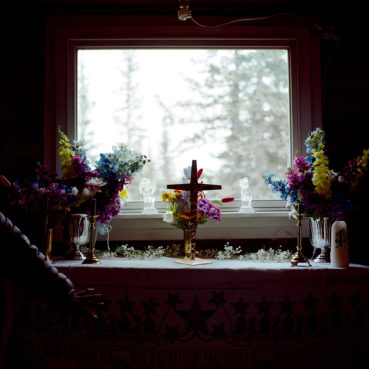 But the Gwich’in don’t see the land as something to offer in barter for better services. “The elders are so deeply connected with the land that they don’t recognize it as separate,” said the Right Rev. Mark Lattime, bishop of the Episcopal Diocese of Alaska, whose church was once a vanguard of white colonization but is now a staunch supporter of the Gwich’in. “What happens to the land is every bit a part of what happens to the spirit and the soul,” said Lattime.

The Gwich’in, who only settled in villages as the state of Alaska was forming in the 1950s so that their children could be registered in schools, have been leading the fight to prevent oil drilling on the ANWR coastal plain ever since, and they are peculiarly situated to continue the fight. Unlike other Alaskan tribes, which signed the Alaska Native Claims Settlement Act resolving aboriginal land claims in the state in 1971, the Gwich’in of Arctic Village and the nearby village of Venetie never signed, preserving their ownership of their Neets’aii tribal lands.

Though the coronavirus pandemic has made the tribe’s immediate future even more uncertain, James believes the self-reliance it has demanded is good preparation for her people in their longterm defense of their traditional homelands.

“We have to depend on our traditional way of life,” she said. “Even if we go back to ‘normal’ it wasn’t normal to begin with because there was too much greed and waste.”

At the same time, she is looking for outside help to provide the only real way to ensure her homeland’s preservation. “Right now is the time to make it a permanent protection,” says James. Otherwise, when oil prices rebound and circumstances change, “they will be back.”

This reporting was funded in part by the Alaska Humanities Forum and the Spiritual Exemplars project at the USC Center for Religion and Civic Culture. 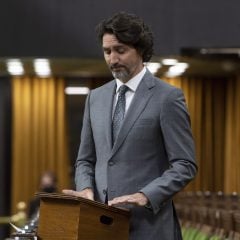