(RNS) — You’ve probably heard of the white evangelicals who have backed President Donald Trump since he launched his campaign for president. Their story is well known to political analysts and average Americans alike: Around 80% to 81% of white evangelicals backed Trump on Election Day in 2016, catapulting him into power and remaining some of his most stalwart supporters throughout his term in office — this despite his multiple personal and political scandals.

But what about those evangelicals — white and otherwise — who don’t support Trump?

That’s the idea behind “The Spiritual Danger of Donald Trump: 30 Evangelical Christians on Justice, Truth, and Moral Integrity,” a new book authored by several prominent evangelical figures and edited by theologian and activist Ron Sider. The collection, which was released on June 1, outlines a series of pointed critiques of the president that range from his personal behavior to his approach to climate change to his treatment of the ongoing pandemic.

Sider, the author of “Rich Christians in an Age of Hunger: Moving From Affluence to Generosity” and founder of the Christian think tank Evangelicals for Social Action, sat down with Religion News Service to discuss the new book and shed some light on evangelicals who not only disagree with the president, but who also see Trump as a unique spiritual threat.

What led to the creation of this book?

It grew out of an obvious concern that white evangelicals were not thinking in an adequately biblical way in their reflections on Donald Trump, his character and his policies. We felt we needed to speak out using our First Amendment rights of freedom of speech to talk about how we evaluated the president’s character and actions in terms of biblical standards. 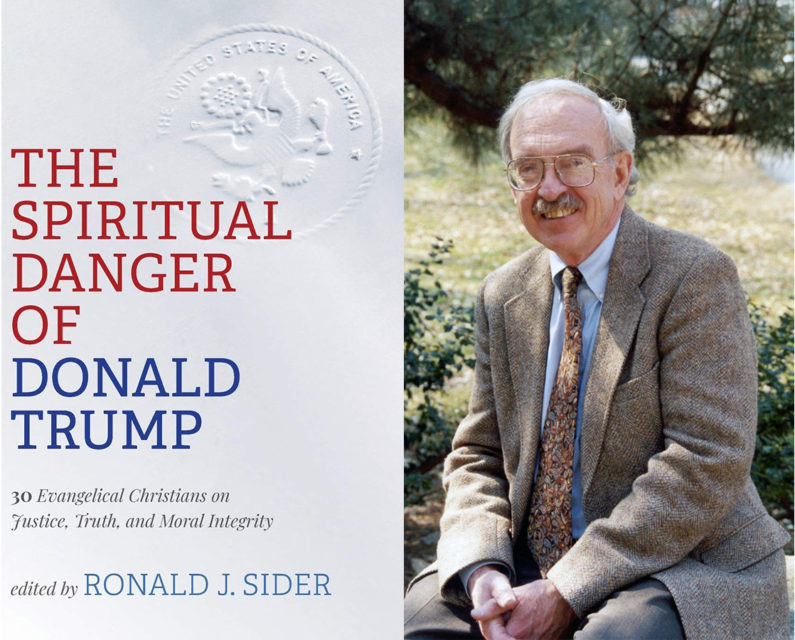 So what is the spiritual danger of Donald Trump?

I would summarize it this way: Trump lies constantly. He has repeatedly demonstrated adulterous sexual behavior. He fails to make justice for the poor a concern in his policies. He constantly stokes white racism. His response to COVID-19 was dreadfully weak in the first couple of months. His position on climate change is simply disastrous. And his constant attacks on the fake media undermine democracy.

Why release this book this year?

One of my chapters in the book is on Trump’s response to COVID-19, but the other one asks: Will the evangelical center remain silent in 2020? I point out that I had a very important conversation with a prominent evangelical who said all of the leaders in his important network were not in favor of Trump. None of them were in favor of Trump, but they didn’t say so (in 2016), and 81% of white evangelicals voted for Trump. So I want to know: Will the evangelical center have the courage to apply biblical standards to Donald Trump in this election year?

Who, exactly, are you hoping to reach?

We hope that every citizen in the U.S. will look at the book and take it seriously. But there’s no question our hope is that the evangelical center will be especially attentive to what we’re talking about. And in my article I talk about what I mean by that evangelical center: I mean (the magazine) Christianity Today, youth movements like InterVarsity Christian Fellowship, the National Association of Evangelicals, Christian colleges and universities and evangelical seminaries. That whole network is a reflective, educated set of people who really deeply want to apply biblical standards to all of life.

It’s that evangelical center where I especially hope the book will get read.

Have you gotten any criticism from fellow evangelicals?

There’s not been any major pushback yet. I wouldn’t be astonished if the book gets attacked — we’ll have to see. I invite dialogue.

Two months ago I wrote a blog saying, “Can’t pro-Trump and anti-Trump evangelicals talk to each other, even pray together?” I pray pretty much every morning for prominent, pro-Trump evangelicals like Franklin Graham, pastor Robert Jeffress in Dallas and so on — I go down a list. I think they want to be faithful to Jesus. I think Christians ought to be able to talk together across our political disagreements. Our oneness in Christ ought to be far more important than our political disagreements.

So I wish we had had that kind of conversation — although I wouldn’t bet my pension that, in fact, that conversation will happen in any major way right now.

What do you say to people who argue that you and other authors in the book do not actually “represent” evangelicalism, or represent a small minority?

First of all, it’s very important that when one talks about 81% of evangelicals supporting Trump, you say “white evangelicals.” Because the black church is theologically evangelical in terms of its piety. And the Hispanic Protestant church is overwhelmingly evangelical, as is the Asian American church — which is growing and sizable.

The black church overwhelmingly did not support, and does not support, Trump. The majority of Hispanics don’t either. So when you take all of that into account, plus the fact that 19% of white evangelicals did not support Trump, there’s probably 40% of evangelicalism — I don’t have a poll to show that exactly, but approximately something like that — did not vote for Donald Trump. 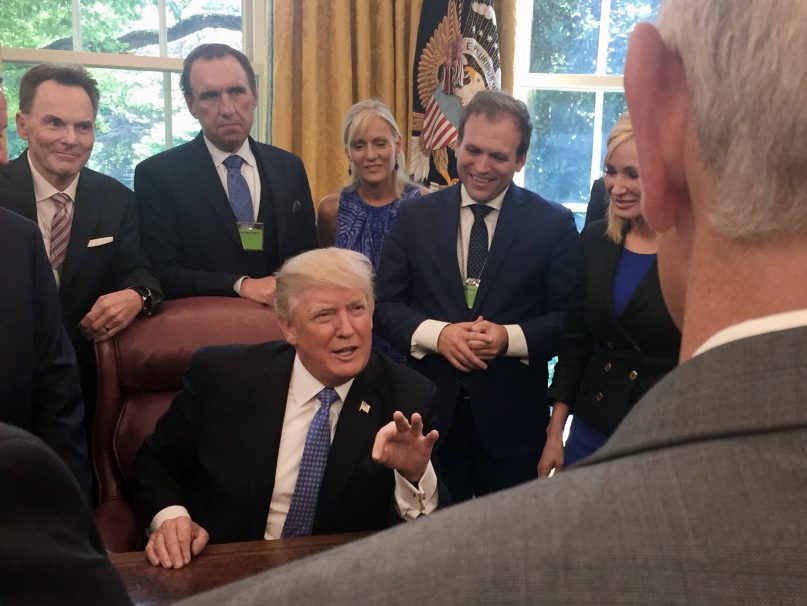 Ronnie Floyd, from left, Rodney Howard-Browne, Adonica Howard-Browne, Johnnie Moore, and Paula White stand behind President Donald Trump as he talks with evangelical supporters on July 10, 2017, in the Oval Office at the White House. Photo courtesy of Johnnie Moore

I know there’s a big hunk of the white evangelical world that Ralph Reed speaks for and is supportive of Trump. What I want to say is: Can you really defend his character? His lies? His public policy with regards to racism, neglect of economic justice and neglect of the environment? Can you defend that on biblical grounds?

I’m a conservative on issues — on abortion. I’m a conservative on gay marriage — I think evangelicals have dealt with that issue in a terrible way, but I do think the Bible is clear. On some issues I fit a conservative political label, and on others issues a more liberal one. But it’s not just an automatically liberal position that I represent, nor do the writers in this book. A number of them are Republicans. One or more have never voted anything but Republican, except for probably voting for a third-party candidate in 2016.

Do you think your fellow evangelicals will agree and respond to these “spiritual dangers” come Election Day?

This book is not a political campaign. We’re exercising our First Amendment rights, but we’re not a super PAC. I expect the writers of the book will probably vote in different ways in 2020.

But we’re all saying that if you start with a biblical set of norms, then there are huge problems with both the character and the policies of Donald Trump. And I hope a significant number of white evangelicals will, in fact, take that seriously in this election year.

In your opinion, why didn’t white evangelicals do so in 2016?

I think 2016 was enormously complex, and some of the chapters try to wrestle with that. I think it’s partly because some white evangelicals do make abortion the all-important issue. It’s partly because, let’s be honest, there’s a left wing fundamentalism as well as the right wing fundamentalism. And there’s a part of the liberal wing of the Democratic Party, which is really, I think, hostile to Christianity and certainly to evangelicalism. White evangelicals feel that, and don’t like it. A third factor is there’s, I must say, continuing racism in the white evangelical world. Trump appeals to that — sometimes a little subtly, and sometimes not very subtly at all.

There’s a part of the white evangelical world that really has bought into identifying the United States with Christianity and a Christian nation, and I think Trump appeals to that. There’s a part of white evangelicalism that is a part of the 50% of the country that simply haven’t benefited economically — maybe even lost ground in the last 40 years — and they’re hurting. It amazes me those people would think a billionaire would help the economically poor, but somehow he managed to appeal to them.

So it’s not just the spiritual danger of Trump. You see dangers in both directions?

It’s never the case that a political candidate affirms the full range of issues I think would be the right set of positions if you started with a biblically grounded framework. So in every election, you have to say, you know, what’s the balance of wisdom and a lack of it, or good and bad policies, in the two candidates?

I actually organized evangelicals for George McGovern in 1972. But from 1972 until 2016, I had never publicly endorsed a candidate. I did it again in 2016 because I thought Donald Trump was just so totally unacceptable.

I just think it’s a mistake in our kind of political system to vote for a third-party candidate.