(RNS) — When LeeQuan McLaurin enrolled at Liberty University as an undergraduate in 2012, he was still trying to understand his sexuality.

So McLaurin, a Christian who now identifies as queer, did what many students at the conservative Christian school do: He joined a Bible study.

Specifically, he joined “Armor Bearers,” which McLaurin said was a run by a Liberty staffer and geared toward men who were described as “struggling” with their sexuality. He said the intent was to appeal to the divine for a spiritual and sexual transformation: Leaders allegedly suggested that the young male participants should remain celibate and then “hope for that heteronormative existence” that would be provided by God.

At least one other former Liberty student has publicly described the group, which is believed to still exist, as a form of conversion therapy, a practice that was declared illegal for minors in the state of Virginia — where Liberty resides — earlier this year.

“We talked about the goal being holiness, and that one day you can have a wife,” McLaurin said.

But those efforts reportedly backfired spectacularly. McLaurin ended up meeting his college boyfriend through Armor Bearers, which he said for many others functioned less as a hub for conversion and more as a “hookup group.”

McLaurin also ultimately came to reject its core message: “I realized that some of those teachings that I had learned were pretty toxic, unhealthy and unnecessary for me — because God doesn’t hate his children.”

McLaurin, who would go on to serve as the school’s director of diversity retention, said his experience at Liberty was not uncommon. The school publicly opposes LGBTQ relationships, yet students at Liberty have created a small but vibrant LGBTQ community.

“They thrive in a place that does not want them to thrive,” McLaurin said.

Liberty University’s fraught history with LGBTQ rights can be traced all the way back to its founder, Jerry Falwell Sr.

In the 1980s, he labeled AIDS as divine punishment for gay people and for “the society that tolerates homosexuals,” according to The Washington Post. He later warned his followers to take action to prevent LGBTQ people from gaining their rights.

“If you and I do not speak up now, this homosexual steamroller will literally crush all decent men, women, and children … and our nation will pay a terrible price!” he said in 1997.

Jerry Falwell Jr., right, answers a student’s question, along with his wife, Becky, during a town hall on the opioid crisis at a convocation at Liberty University in Lynchburg, Virginia, on Nov. 28, 2018. (AP Photo/Steve Helber)

Falwell’s son, current Liberty President Falwell Jr., has been less vocal on the subject of LGBTQ relationships than his father, although members of the school’s LGBTQ community staged a protest on campus in 2019 when Falwell made comments they decried as transphobic. The school also made Campus Pride’s “worst list” for LGBTQ youth as recently as 2017, and Liberty’s code of conduct — known as the “Liberty Way” — still explicitly forbids sexual relations “outside of a biblically-ordained marriage between a natural-born man and a natural-born woman.”

McLaurin recently made headlines for resigning from his post at Liberty, citing what he said were the school’s longstanding issues with race. His departure was one of several at Liberty in recent weeks, with Black staffers and students leaving the school after its president, Jerry Falwell Jr., tweeted out an image of a mask emblazoned with a picture of Virginia Gov. Ralph Northam in blackface.

McLaurin, who is Black, argued that diversity issues at Liberty extend beyond race. He and others at the school claimed that administrators such as the school’s chief diversity officer, Greg Dowell, have created an environment that is hostile to LGBTQ people.

“The chief diversity officer has shown a great disdain for queer people,” he said.

McLaurin and multiple Liberty students pointed to a town hall meeting that took place during this year’s spring semester. They said Dowell was asked if administrators would support LGBTQ students if they encountered discrimination on campus.

According to McLaurin and the students, Dowell answered yes, explaining that a student who experienced discrimination could seek relief under Title IX — the federal education statute that prohibits discrimination “on the basis of sex.”

The chief diversity officer then allegedly went on to make it clear the school still discourages same-sex relationships.

According to McLaurin, Dowell said Liberty would not allow students to create any official pro-LBGTQ groups and suggested that if students disagreed with the school’s conservative approach to sexuality and gender identity, then perhaps they shouldn’t attend Liberty in the first place.

McLaurin also alleged that Dowell told him on two separate occasions that homophobia was not present on Liberty’s campus. When McLaurin pressed Dowell by asking what he would call instances of students using anti-gay slurs, Dowell allegedly dismissed the remarks as “buffoonery.”

Liberty officials did not offer an on the record response to multiple requests for comment on this story, including a request for Dowell to corroborate McLaurin’s account.

Current Liberty students said that the administration’s posture toward LGBTQ relationships and identities doesn’t line up with a student body that, while not always welcoming, may be shifting its views on sexuality.

“The overall culture of the student body surrounding LGBTQ issues is definitely softening just in the three years I’ve been there,” said one rising gay senior who requested to remain anonymous to protect their identity. “I think the administration is a lot of the older generation, and once you believe something for most of your life, it’s really hard to kind of go back on that and change your opinions.” 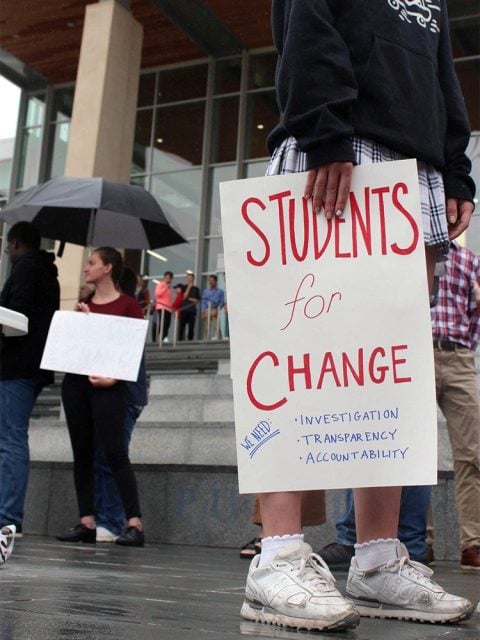 Experiences vary: Another student, who also requested anonymity, said LGBTQ people are made to feel unwelcome on campus.

“LU likes to pretend that it doesn’t have LGBTQ students,” the student said via text message.

McLaurin said that while on staff at the university from 2014 to 2020, he initially felt the need to be careful about disclosing his sexual orientation. He began working for Liberty in various capacities after graduation, taking jobs in the school’s information technology office, the Student Advocate Office, and eventually the Office of Diversity and Inclusion.

He feared if the wrong person found out about his sexuality, he would be fired.

“I used to always have this lurking fear,” he said.

He added that there were staffers who were supportive when he finally broached the subject, and that by the time he resigned from his post at the school, he was “not hiding” his sexual orientation.

“Everyone that knows me or even pays a modicum of attention to my social media knows I’m a queer black man,” he said.

Even so, McLaurin said students at Liberty face a culture he described as “entrenched in fear.” He would often walk LGBTQ students to meetings with administration officials because they were afraid of what would transpire — even if the meeting ultimately had nothing to do with sexuality or gender identity.

Despite such obstacles, McLaurin and others noted that LGBTQ students at Liberty have still managed to carve out spaces for themselves.

While still employed at Liberty, McLaurin helped launch a group called QueerSpace for LGBTQ students, which met off-campus. Members of the group, which McLaurin said hit around 40 at its peak, would gather in a local community space to play games, hang out, and watch RuPaul’s Drag Race.

“We really tried to be there for them,” he said. “I told them … if they run into issues, if they’re being discriminated against, come to me.”

Other students have formed unofficial organizations, and many LGBTQ students belong to an “underground” group whose name, membership and methods of gathering are closely guarded by organizers to protect students involved. In addition to maintaining strict secrecy, students interview all new members to shield participants from possible interlopers.

Students said they were hopeful about the potential for change but admitted that any major shift may be difficult. McLaurin and students said they hope the administration would institute non-discrimination policies for its LGBTQ community. They also believe officials should invite speakers to the school who can discuss LGBTQ-affirming theology.

In the meantime, McLaurin wishes more attention was paid to the often quiet strength of Liberty’s LGBTQ community.

“Let’s talk about the beauty of the queer community on campus — how resilient they are, how amazing they are and their relentless spirit.”