(RNS) — On Tuesday nights at 8:30 p.m., tens of thousands of people throughout France — believers and non-believers, Jews, Muslims and Christians — log on to Facebook to hear the nation’s foremost female rabbi discuss the intersection of racism and anti-Semitism and help them make sense of a modern plague.

“We are in a moment of extreme vulnerability when life and death hold hands,” said Rabbi Delphine Horvilleur, known for her original interpretations of Biblical texts, psychoanalytic thought, art and poetry. “Some people will use this moment to create a bubble of protection, to close borders and embrace ideologies of contamination that demonize people. But what is the meaning of my life if confinement makes me blind to the other?”

Horvilleur, 45, who has been called a rock star in a leather jacket, is a former model who has appeared on the cover of French Elle. The wild curls framing her face have been compared to the sidelocks of Hasidic Jews. She finds the descriptions amusing insofar as they counter stereotypes and help her reach audiences across cultures.

Horvilleur is also known as the rare public intellectual who has brought faith into the conversation in a country committed to laicité, or secularism. And though she is also one of the few progressive rabbis in France’s overwhelmingly Orthodox Jewish community, she has become a leader of a growing movement of Jews from all denominations. Less an activist who urges congregants to take to the streets to protest injustice, she is a purveyor of ideas and a presenter of possibilities in the tradition of Simone de Beauvoir and Jean-Paul Sartre. 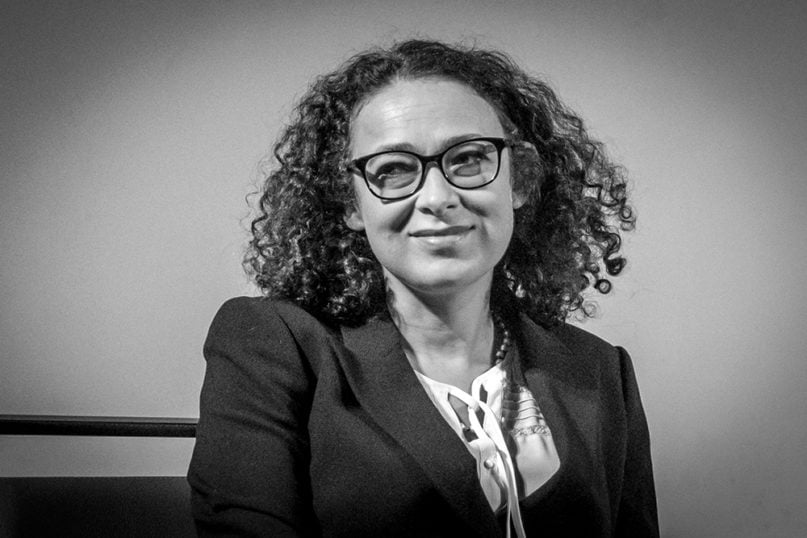 Horvilleur calls herself a storyteller, one who believes that “God has a good sense of humor.” What could be more absurd than the pregnancy of 89-year-old Sarah, she asked, or the Hebrews walking for 40 years to reach a nearby destination? The underlying point to her humor, however, seems to be to encourage resiliency over despair.

The granddaughter of Czechoslovakian Holocaust survivors, she went to Israel at 17 to study medicine and wrestle with the tension between distinctly Jewish and universal ideas. She began to study Talmud and fell in love with “the sacred exercise of interpretation.” Later, she moved to New York to study for the rabbinate at the Reform movement’s Hebrew Union College.

Today, she is a leader of the largest liberal congregation in France, with more than 2,500 families. For more than a decade, she has published Tenou’a — Hebrew for movement — a magazine of art and Jewish thought that covers such issues as immigration and LGBTQ rights.

The role of religion in a time of crisis, she said, is to help people understand the past, interpret the present and think about the future. She rejects what she calls a religion of nostalgia that idealizes the past and seeks to recreate a world we once knew.

The Hebrew Bible, she said, is full of stories of leaders like Abraham, who were called to leave their birthplace to journey to an unknown region. “We are who we are because we were willing to go on another path. Judaism is a religion of becoming.”

She understands God the way the Jewish mystics do: as infinite and impossible to describe in words and she is less concerned about what people believe than how they act. Hundreds of people gather on the Champs de Mars, as the Eiffel Tower is seen in the background, during a demonstration in Paris, France, Saturday, June 6, 2020, to protest against the recent killing of George Floyd, a black man who died in police custody in Minneapolis on May 25, 2020. (AP Photo/Francois Mori)

One of only four female rabbis in France, she said that women have been shut out of the questioning that is a pillar of Judaism. The presence of women enables both men and women to read text differently, hear the voices of secondary characters and sometimes abandon old ideas. “You need to be unfaithful enough to our tradition to be truly faithful,” she said. “It’s an absolute paradox in our religion.”

As protests over police killings of African Americans have spread to the streets of France, Horvilleur reminded her listeners that racism goes back to biblical days. When Moses married an unnamed Black wife, his older sister, Miriam, gossiped about the woman’s race, and God struck her with leprosy. This story, Horvilleur said, shows how difficult it is to banish the ghosts that continue to haunt us. “What do these ghosts have to teach us and why are we so reluctant to let them go?”

“(Sigmund) Freud said the only way you know you have changed is when you react to the same situation differently,” noted Horvilleur, whose most recent book, “The Rabbi and the Psychoanalyst,” about religious and psychoanalytic interpretation, will appear in France in September. 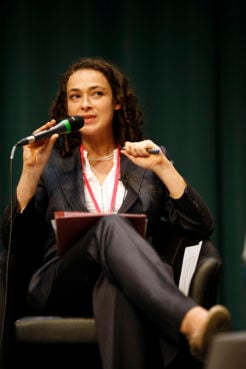 Her popularity may be explained, in part, by an irresistible hopefulness in dark days. As people emerge from lockdown in France, she envisions a “messianic moment” — not the end times, she said, “but when something happens in our life that is totally unexpected and creates the opportunity to reinterpret our daily experience.”

She hopes that moment will encourage dialogue between Muslims and Jews, which she has fostered through interfaith talks and a book she co-authored with French-Moroccan political scientist Rachid Benzine, “A Thousand Ways to Be Jewish or Muslim.”

“The virus travels very fast,” she said. “We need to find ways to connect our narratives and experience to travel even faster.”

The only line Horvilleur is wary of crossing, it seems, is that between religion and politics, given that the French expect a clear separation between church and state. When she objected publicly to Jerusalem being used as a political pawn after the United States moved its embassy from Tel Aviv to Jerusalem, the small, right-wing extremist group, the French Jewish Defense League, accused her of ”stabbing Israel in the back” despite her deep attachment to the nation.

But she is beginning to receive surprising acceptance from more conservative Jews in France and was recently invited to participate in a ZOOM conversation with Rabbi Eliezer Melamed, a prominent ultra-Orthodox rabbi who lives in an Israeli settlement.

“He looks more like a rabbi than I do with his long, long white beard,” she said, smiling.

Although they disagree about whether women should be allowed to be rabbis, they talked civilly, even warmly, about such topics as how to balance communal and individual selves, convincing Rabbi Horvilleur of the possibility of building bridges even during a pandemic.

“We have a shared heritage that allows us to listen to one another with humility,” she said. “Such dialogue is what we dearly need in this time of brokenness.”