(RNS) — The Rev. Traci Blackmon was at home outside of St. Louis when a local hospital called. It had been sending people with mild coronavirus home to recover, but it didn’t have enough masks to send with them.

Now the hospital had a question: Could Blackmon’s church help sew some masks?

“That moment still haunts me,” said Blackmon, senior pastor of Christ the King United Church of Christ in Florissant, Missouri, and a registered nurse. She knew how crucial it was for those people to protect others from contracting the disease.

She was also ready and able to help. Christ the King is part of a network called Masks for the People that is distributing surgical masks and hand sanitizer in low-income and minority neighborhoods. She told the hospital the church would be happy to help.

As coronavirus cases surge again, churches across the U.S. have stepped up, providing medical supplies to help slow the spread of the virus and food to those who have lost their jobs. Still others are serving places affected by the nationwide Black Lives Matter protests after the death of George Floyd. Through it all, church leaders have had to navigate how to meet people’s needs while keeping their volunteers safe. Minister Kimberly McKenzie, center, waves goodbye to a man who received a free COVID-19 test on June 5, 2020, at Christ the King United Church of Christ in Florissant, Missouri. RNS photo by Nick Schnelle

None said it has been easy. But in interviews this month, all said it is what their faith demands.

The U.S. has had more than 2.5 million confirmed cases of coronavirus and more than 125,000 deaths — far greater numbers than have been reported by any other country. Infections in the U.S. began to recede in May after states issued stay-at-home orders and closed nonessential businesses. But they shot up in mid-June as many of those states began to reopen their economies, and infections are now at a new high.

At Blackmon’s church, a small group of volunteers packages the masks and sanitizers for distribution on long church dining tables — two volunteers per table, with the tables 8 to 10 feet apart. Everyone has to wear masks and gloves, and they’re encouraged to wash their hands frequently. Each pack of masks bears a sticker that says “Made with love by Christ the King.”

On Fridays, they distribute their handiwork to people who drive through. The church distributed more than 1,900 masks and hand sanitizers on one recent Friday, and also offered free coronavirus tests. 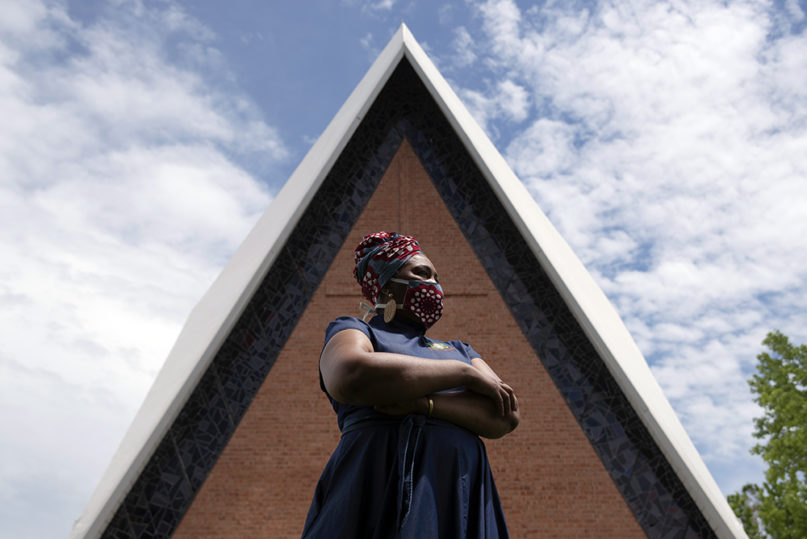 The Rev. Traci Blackmon, pastor of Christ the King United Church of Christ, poses for a portrait June 5, 2020, at her church in Florissant, Missouri. RNS photo by Nick Schnelle

With the church’s worship services and other ministries still meeting online, Blackmon said, the effort has given some of her older members a way to stay connected. “It’s allowed them to have a minimum level of social interactions that sometimes our elderly people don’t have because they’re living alone,” she said. “It’s reminded them what church is.”

The Rev. Michael McBride, director of a faith-based advocacy group called the Live Free Campaign, launched Masks for the People on April 6, just three days after the federal Centers for Disease Control changed its guidance on wearing masks in public. 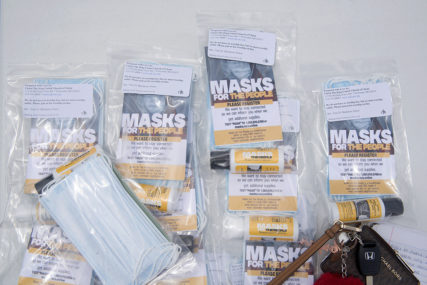 Piles of Masks for the People health care kits sit on a table for distribution June 5, 2020, at Christ the King United Church of Christ in Florissant, Missouri. RNS photo by Nick Schnelle

Masks for the People partnered with the public benefit corporation Initium Health to secure a supply of surgical masks and hand sanitizer. Churches, Black Lives Matter groups and groups of formerly incarcerated people are distributing those supplies at sites in a dozen states. Many of them go to incarcerated people, essential workers and minority communities, all of whom are more likely to be hospitalized with coronavirus, according to the CDC.

“We believe that you cannot decide who lives and who dies based off of wealth or position or social status,” said McBride, who with Blackmon is a founding member of the Black Church PAC, which focuses on combating mass incarceration, gun violence and voter suppression. “We also felt that in a public-health emergency, all the ethical responses required the most vulnerable communities to be prioritized first.”

At Holy Trinity Lutheran Church in Minneapolis, the call to serve arrived at the church’s front door when a local policeman killed George Floyd, an unarmed black man, and protesters set fire to a police precinct nearby.

At first, Holy Trinity opened its doors to street medics who were tending to injured protesters. Then, as the protests damaged local grocery stores and food shops, the church realized its food-rich neighborhood was suddenly a food desert. The church quickly pivoted to offering a food pantry where local residents could get donated food and toiletries. The church also helped local businesses collect plywood and provided volunteers to help them board up against looters.

“Our church is the public building that’s left in this corner of the city,” Trinity’s lead pastor, the Rev. Ingrid Rasmussen, told Religion News Service earlier this month. 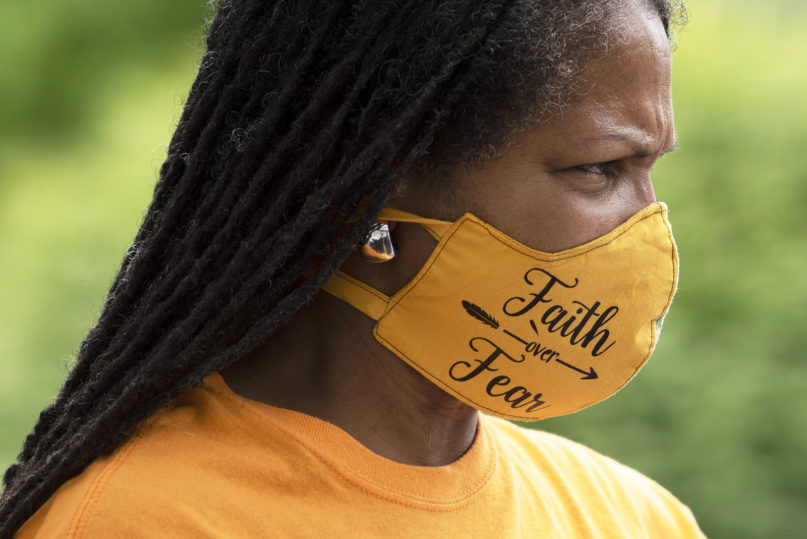 The Rev. Dinah Tatman helps those working at a coronavirus testing site June 5, 2020, at Christ the King United Church of Christ in Florissant, Missouri. RNS photo by Nick Schnelle

The combination of the protests and the pandemic made meeting the community’s needs more difficult for Rasmussen’s congregation. The church has avoided calling on many of its older volunteers because of the risk of contracting COVID-19, Rasmussen said. Instead, younger church members and younger members of the community who do not attend Trinity — or any church — have been stepping up to help.

Rasmussen’s advice for other churches that are wondering how to serve their communities is to leap before they look. “Sometimes we need to begin before we know the ending,” she said.

In North Carolina, Baptists on Mission has been taking a similar leap of faith. Earlier this year, the relief group had tens of thousands of medical masks set aside for use in hurricane cleanup.

When the pandemic hit, it gave almost all of them away.

“God has provided for us,” said Richard Brunson, the group’s executive director. “Every day we see ways that God is providing. So I’m really not too worried.” 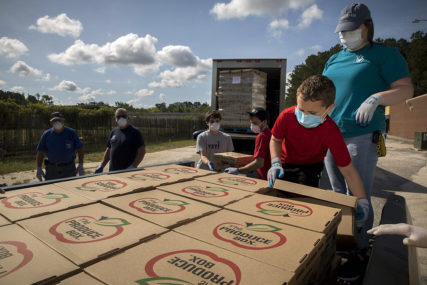 Now, Baptists on Mission is getting food boxes to people across North Carolina who have lost their incomes due to the pandemic. Brunson said the group is distributing tens of thousands of pounds of food a week at 200 sites across the state.

Some of Brunson’s most stalwart volunteers are at high risk from coronavirus. He said the group is trying to recruit younger helpers who are at lower risk. It’s also trying to figure out how to feed and house volunteers safely if a big hurricane hits the North Carolina coast this year.

“We’ve got to try, as best as we can, educate people so they can, as safely as possible, though there is still a risk, meet people’s needs,” Brunson said. “And we’re trying to do that in Christ’s name.” 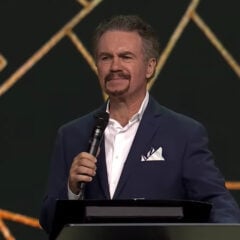