(RNS) — Each week Religion News Service presents a gallery of photos of religious expression around the world. This week’s photo selection includes various forms of prayer, the retirement of the current Mississippi state flag and more. 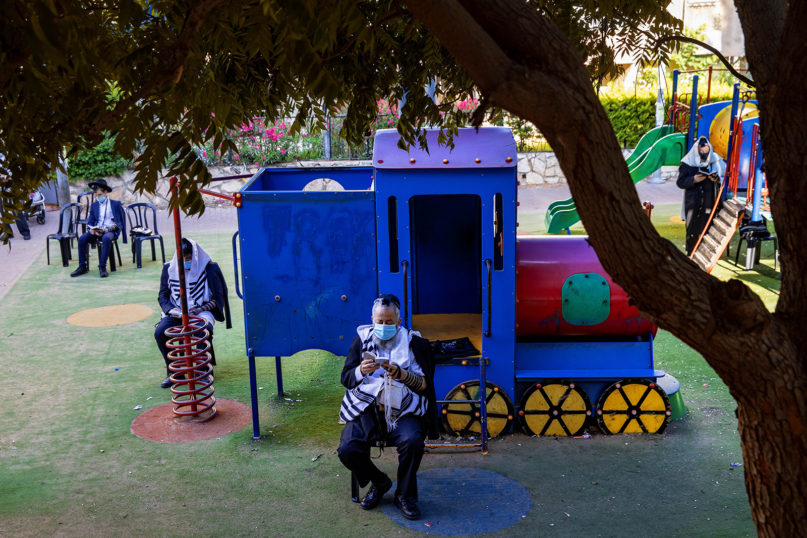 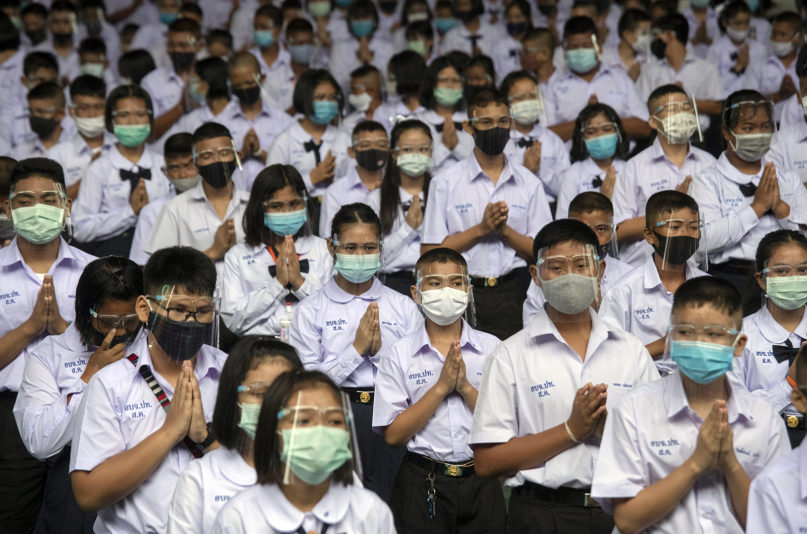 Students, wearing protective gear to help curb the spread of the coronavirus, pray before class at the Samkhok School in Pathum Thani, outside Bangkok, Wednesday, July 1, 2020. Thailand began its fifth phase of loosening COVID-19 restrictions, allowing the reopening of schools and entertainment venues such as pubs and massage parlors, which had been shut since mid-March. (AP Photo/Sakchai Lalit) 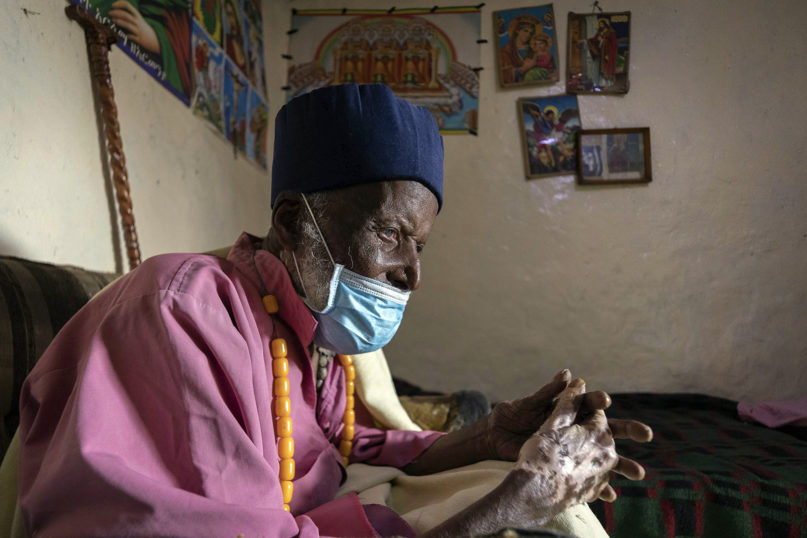 Centenarian Tilahun Woldemichael cries as he prays to God after spending weeks in the hospital recovering from COVID-19, at his house in Addis Ababa, Ethiopia, Saturday, June 27, 2020. The Ethiopian monk, believed to be 114-years-old, was discharged from a hospital on Thursday, June 25. (AP Photo/Mulugeta Ayene) 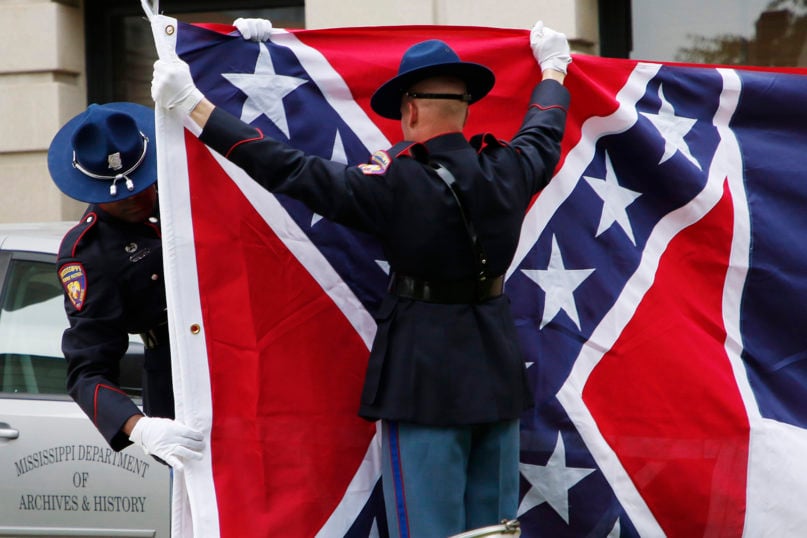 A Mississippi Highway Safety Patrol honor guard folds the retired Mississippi state flag after it was raised over the Capitol grounds for the final time in Jackson, Mississippi, Wednesday, July 1, 2020, after the state’s governor signed a bill ordering a new design for the flag without the Confederate battle emblem.  (AP Photo/Rogelio V. Solis) 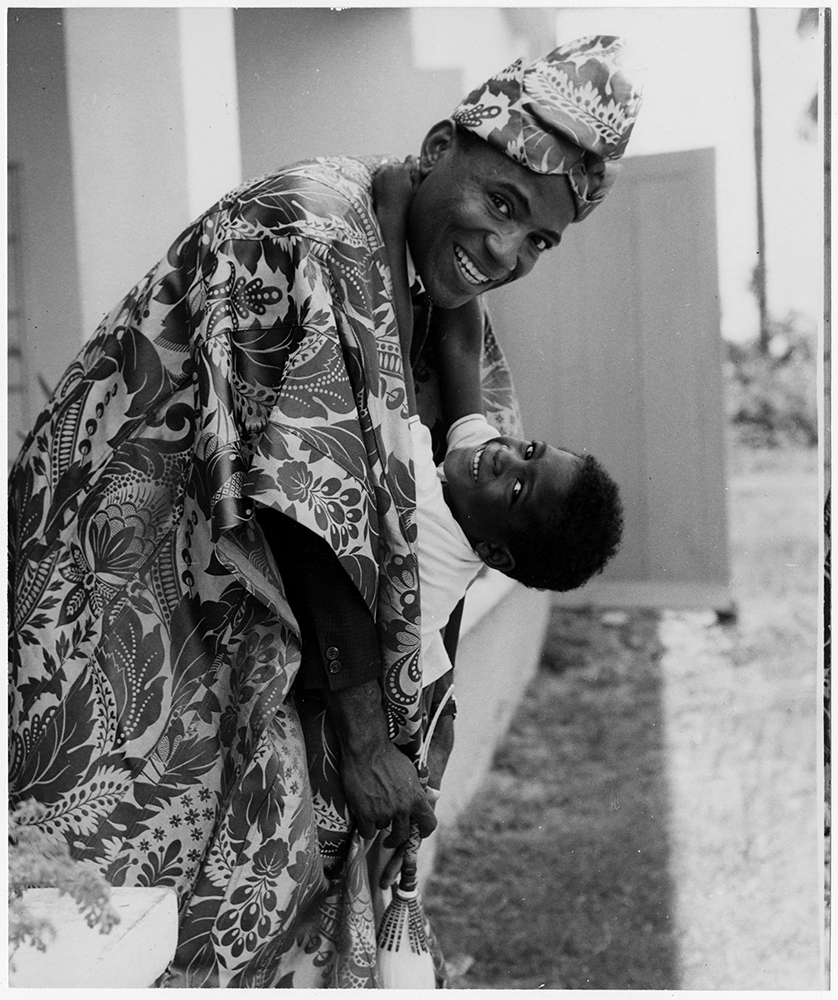 James Meredith, who in 1963 became the first African American to graduate from the University of Mississippi, receives an enthusiastic greeting from his five-year-old son, John, at Ibadan, Nigeria, in 1965. Mr. Meredith, 32, wearing traditional Nigerian garb over his business suit, did post-graduate work at the University of Ibadan. His quiet life there with his wife and son was a sharp contrast to his experience in Mississippi, where U.S. troops had to quell rioting when he enrolled in “Ole Miss” and former Mississippi Gov. Ross Barnett attempted to bar his graduation. RNS archive photo. Photo courtesy of the Presbyterian Historical Society 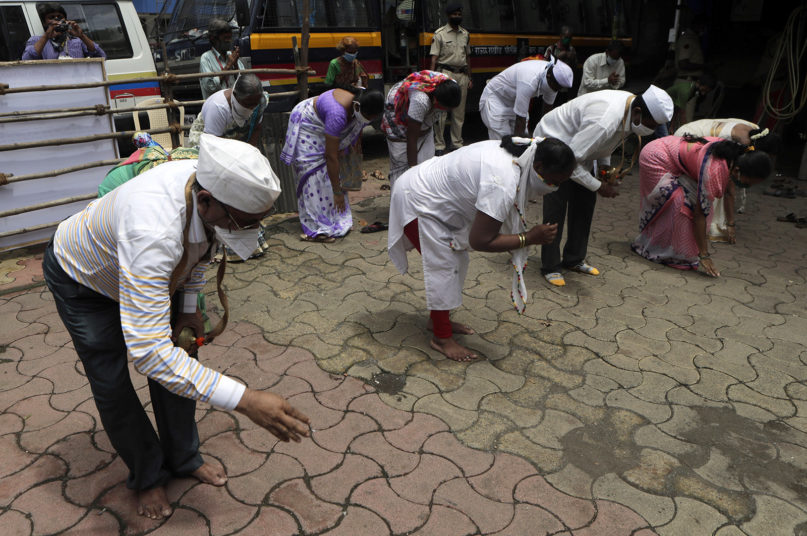 A small group of Hindu devotees who were permitted to gather by authorities bow to offer prayers on the occasion of Ashadi Ekadashi outside the temple of Lord Vitthal, which is closed due to COVID-19, in Mumbai, India, Wednesday, July 1, 2020. Traditionally thousands of devotees of Lord Vitthal from the western Indian state of Maharashtra undertake a pilgrimage on foot to celebrate Ashadi Ekadashi. (AP Photo/Rajanish Kakade) Indian Muslims light lamps before offering prayers for protection against COVID-19 at Badshah no Hajiro (King’s Mausoleum) in Ahmedabad, India, Tuesday, June 30, 2020. Indian Prime Minister Narendra Modi said in a live address Tuesday that the country’s coronavirus death rate is under control, but that the country is at a “critical juncture.” (AP Photo/Ajit Solanki) 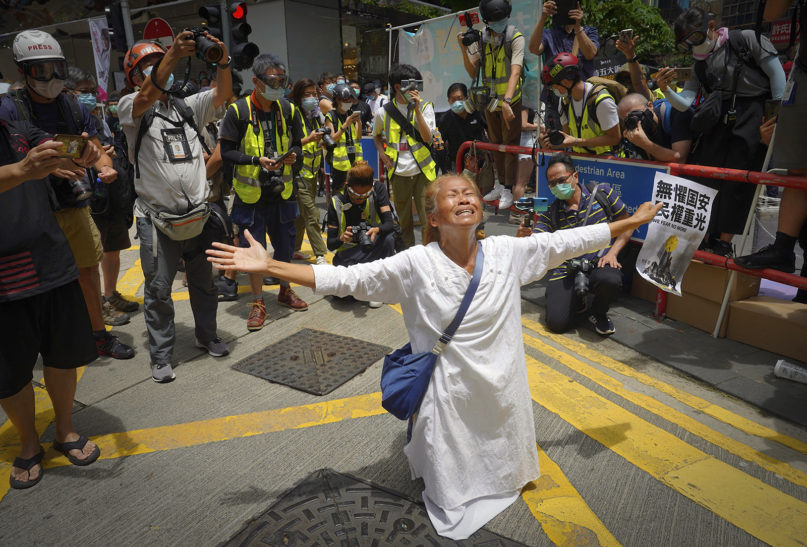 A woman prays at Causeway Bay before the annual handover march in Hong Kong, Wednesday, July 1, 2020. Hong Kong marked the 23rd anniversary of its handover to China in 1997, one day after China enacted a national security law that cracks down on protests in the territory. (AP Photo/Vincent Yu) 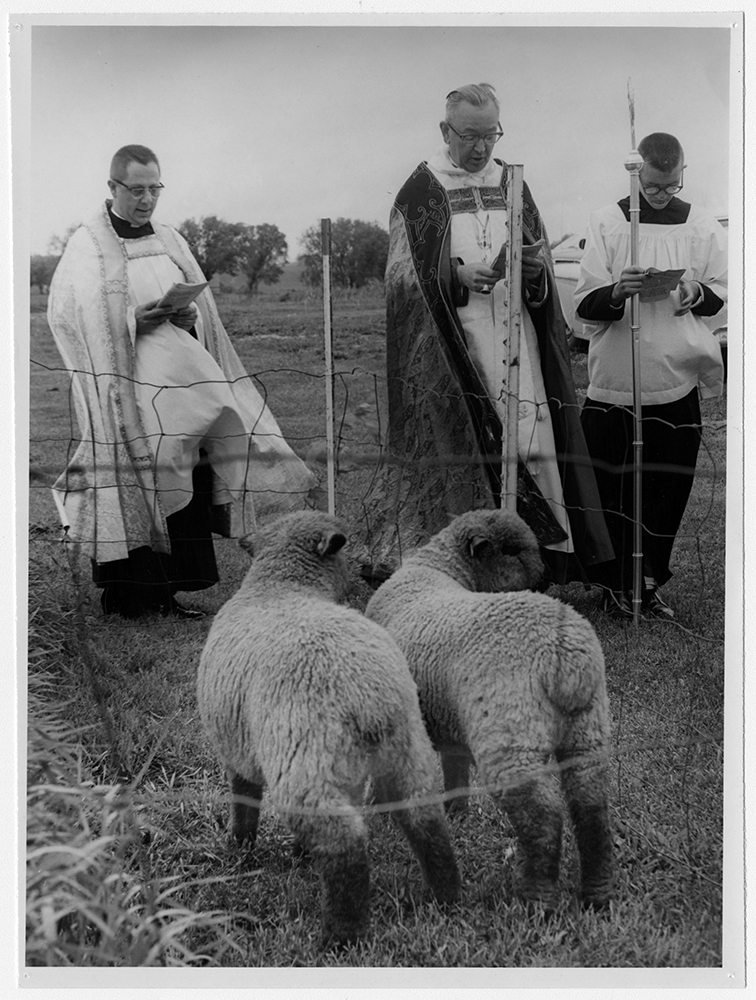 Bishop Donald H.V. Hallock of Milwaukee, center, officiates at the annual Blessing of the Fields ceremony at the rural St. Paul’s Episcopal Church in Ashippun, Wisconsin, on May 23, 1965, as live animals were included in the annual blessing at St. Paul’s for the first time. The ceremony marked Rogation Sunday and the dedication of farm fields, seeds, implements and the farmers themselves. RNS archive photo by Robert J. Higgins. Photo courtesy of the Presbyterian Historical Society