(RNS) — Maurice Odhiambo, the pastor of a church in Nairobi, is up before the sun rises in Kenya. He and his team are headed once more into the Mathare Valley, an informal settlement of shanties along the Mathare River, east of downtown Nairobi.  Like other slums around the Kenyan capital, the slum is filled with people unable to work as the Kenyan government’s  lockdowns have stretched into months.

In the United States, the argument against lockdowns is often framed as a selfish choice that will kill people for the sake of opening the economy. In places like the Mathare Valley the lack of work means that malnutrition and starvation are a clear and present danger.

The United Nations World Food Program sounded the alarm in May. Sub-Saharan Africa was already at risk for food shortages after a plague of locusts ravaged much of the harvest. The fate of many millions of people hung by a thread. The economic crisis caused by COVID-19 lockdown policies broke that thread.

The U.N. is predicting 30 million children will die of starvation this year as a direct result of the economic crisis. To put it differently, more people will die from the policies designed to stop the virus than from the virus itself.

People will also die from diseases other than coronavirus. The World Health Organization recently warned that the focus on COVID-19 has dramatically slowed its vaccination initiatives and in many places halted them altogether. WHO is warning of a resurgence of diseases that have either been defeated or largely brought under control. Diphtheria, measles and polio are all poised to make a comeback, erasing decades of progress.

Odhiambo didn’t need to read these reports; he is witnessing them firsthand. As his team makes its way into the Mathare Valley, its members are already in danger from the thousands of people pressed up against the gates of the slum, desperate to find food for their families. The team has enough supplies for thousands of meals in a community that needs millions. The walled facility where the team distributes the provender will provide a lucky few with enough food to last them for two to three weeks, if they portion it properly.

Odhiambo knows what would happen if the gates don’t hold, but he doesn’t look down on the people in the crowd. “If your children are literally starving, what would you do?” 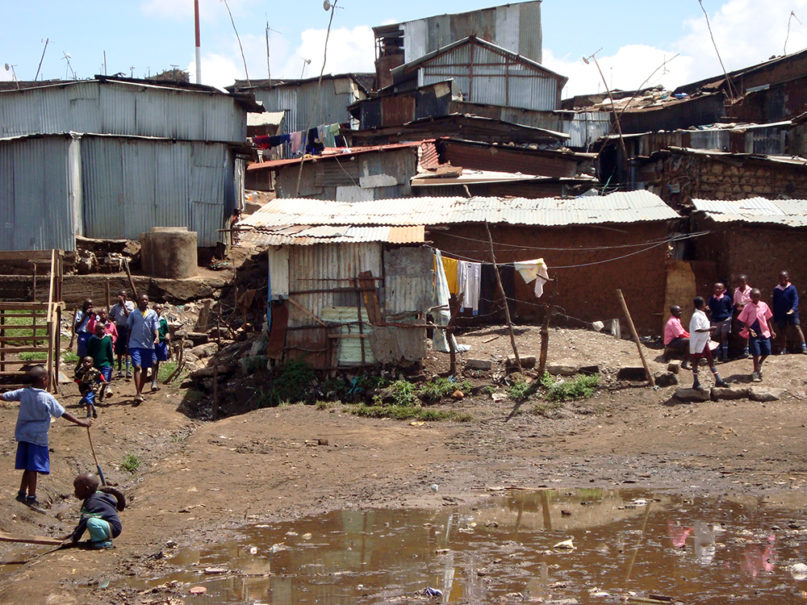 The Mathare Valley slum in Nairobi, Kenya, in 2010. Photo by Laura Kraft/Creative Commons

At a time when ministries like Odhiambo’s need more funds, they are receiving less. The economic crisis affects charitable giving in the United States and Europe. America is still the most generous nation on the planet and our donations are the lifeline for hundreds of millions of people. The continued lockdown of our economy has a direct effect on their lives. Every dollar we don’t give represents two meals that will not be provided in places like Kenya.

The U.N. is facing a challenge as well. At a time when it needs increased funding to blunt the impact of the food crisis, member nations are themselves trying to stay afloat with economic stimulus packages for their own citizens. U.N. funding is being cut, leaving millions of refugees in places like the border of South Sudan and Uganda without a guarantee of continued assistance.

When the lockdown orders were handed down across East Africa, they included immediate halt to all public transportation, on which the vast majority of the population depends to get to work, the market or health care. Pastor Fred Manoga leads a church in Kiterede, Uganda, a small, predominantly Muslim village about an hour north of Kampala. Manoga has seen women die in childbirth, unable to get to a local hospital because of a lack of transportation.

He is not wrong. There are currently 1.5 billion children out of school worldwide, according to UNESCO; many have no access to internet or the devices that could give them access to online learning. Though child labor has been decreasing because incomes had been rising in many developing nations, children are now being forced to join their parents in finding work.

The cost of the lockdowns across the world goes beyond hunger. Pastor Birendra Kishku leads a church in Biratnagar, Nepal, that sits along one of the major highways for trafficking girls from the Himalayan Mountains into India and beyond. His church has set up checkpoints along the highway where they have rescued dozens of girls, but this ministry has come to a halt due to the lockdowns across Nepal.

But food security is the most urgent and common effect of the lockdowns. The Nepali government has technically banned humanitarian aid from being distributed but Kishku has received special permission to distribute food and supplies to families in Biratnagar who are starving in their homes. He loads up as much rice and beans as he can on his motorcycle and makes as many trips as he needs to until he runs out of food.

The World Bank predicts that this crisis will push tens of millions of people back into extreme poverty before it is over, reversing a decade of progress in lifting hundreds of millions out of poverty.

When you hear, then, about lockdowns ending or people protesting the limitations on their lives, don’t leap to judge the people trying to provide for their families. As my friend in Haiti put it: With the virus there is a 1% chance I might die. Starvation is 100%.

(Darren Tyler, the lead pastor of Conduit Church in Franklin, Tennessee, is the president of Conduit Mission, which provides relief to people in extreme poverty in developing nations. The view expressed in this commentary do not necessarily reflect those of Religion News Service.)