But when his school and the church were closed to avoid the spread of COVID-19 three weeks before Easter, Manyike came up with an unusual solution: He decided to play the part of the priest himself.

Having rehearsed his parts in the Holy Week liturgies and in the choir, Manyike was disappointed to be deprived of the vibrant worship typical of South Africa’s township, with their joyful ululations, vigorous clapping, energetic beating of drums, melodic tapping of marimbas. With internet data prohibitively expensive for most of its parishioners, St. Martin’s is not able to livestream any of its services.

Manyike was determined, however, that he and his family wouldn’t be starved of the celebration of Mass.

“I want you to feel like you’re at church,” he told his skeptical grandmother to convince her to celebrate Easter under his direction.

Finally, he prayed to God. “I found myself asking God for forgiveness and asking God to let me do this sacrifice,” he said. “I know that I am not anointed in my hands yet, but please let me do it,” he begged God. “Something in my heart said, ‘Sandile, this is what you’re born to do.’” 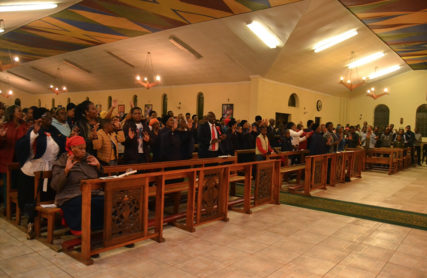 Manyike’s solution to the closing of his church was not just a precocious playacting: While churches around the world have substituted virtual services for their weekly physical gatherings or simply done without, some South Africans have insisted on performing their own substitutes for worship. Aside from the lack of in-person connection, there is also a lack of connectivity. Only 62% of South Africans have internet access, according to the We Are Social Digital 2020 report.

“The church in South Africa, still, is rooted in the Mass experience,” said the Rev. Lawrence Mduduzi Ndlovu, a lecturer in pastoral theology and Scripture at St. Augustine College and the parish priest of Our Lady of Peace, a Catholic church in the Roodepoort section of Johannesburg — “which is a good thing because that’s what the Church teaches,” he said.

Ndlovu related a recent conversation with his mother in which she told him, “Even in the middle of apartheid, and all that mess, we still went to church. Now we have this invisible enemy and we’re housebound.” Ndlovu said he has encouraged his mother to do the readings and prayers as if she were in church.

Social media in South Africa was awash during the Holy Week and Easter season with photographs and videos of worshippers at home, waving their natural or paper-made palm fronds on Palm Sunday and with bowls of water at their feet on Holy Thursday.

Only ordained priests are authorized to perform the sacrament of the Eucharist in the Catholic Church, which holds that the bread and wine become in a real sense the body and blood of Christ, as do liturgical Protestant denominations with varying understandings of what happens when the elements of Communion are consecrated. By church law, “a person who attempts the liturgical action of the Eucharistic sacrifice, though not promoted to the sacerdotal order,” incurs excommunication. 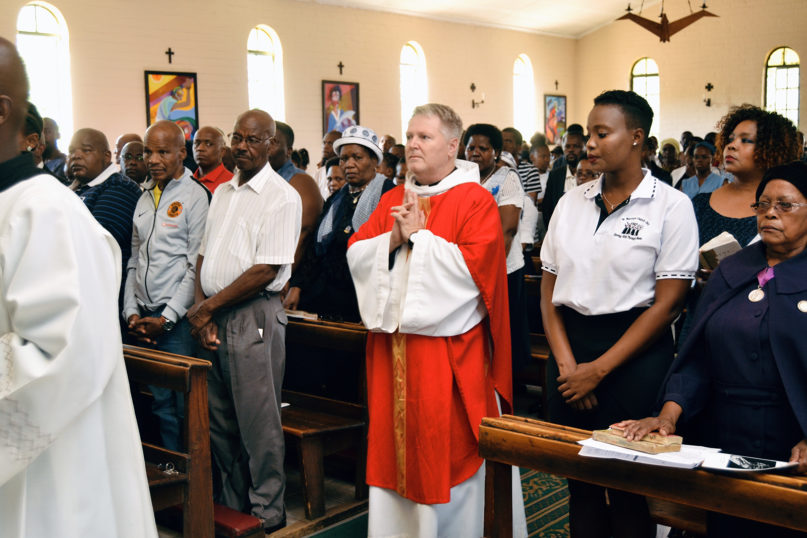 But the Rev. Bruce Botha, the parish priest at St. Martin de Porres, said what his teenaged parishioner did didn’t violate any rules. “He had no intention of simulating,” Botha, a Jesuit, wrote in a WhatsApp message, “in the sense of pretending to be something which he is not.” Manyike’s home liturgy, Botha said, “was done in private for personal spiritual reasons, and in the company of family who knew he was not a priest and could not and did not intend to consecrate the precious body and blood.”

Manyike’s home service was also carried out with a sense of ceremony. Wearing blue jeans and a white T-shirt with a black-and-white print of the Blessed Benedict Daswa — a South African schoolteacher being advanced for sainthood in the Catholic Church — and a crucifix around his neck, the teen arranged a small, squared coffee table in the middle of the living room, dressed it in a white crochet tablecloth and lit a white candle. 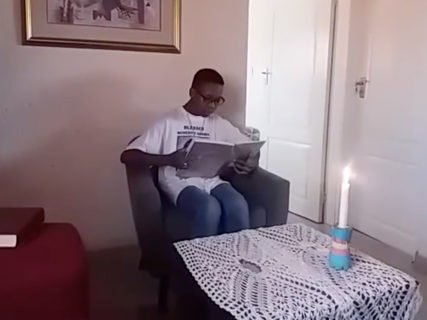 Standing in for the accustomed unleavened bread was a hot-cross bun — a traditional cinnamon and raisin tea cake, widely sold in supermarkets at Easter. After saying the liturgy, he led his family in the Prayer of Spiritual Communion, which priests in several denominations have offered in lieu of distributing Communion to their remote congregations.

“Since I cannot at this moment receive you sacramentally,” the prayer reads, “come at least spiritually into my heart.”

The South African government lifted the restrictions on church services, a move welcomed by the South African Council of Churches. But many religious leaders have kept their doors closed. “It’s just too dangerous to reopen our churches,” Botha said. “Doing so would mean we would become like mini-epicenters.”

Nonetheless, Lerato Manyike, the boy’s 36-year-old mother, was encouraged by her son’s initiative and by the importance he places on faith. “Every time we have a Mass at home feels like I’m in church,” she wrote via WhatsApp.

Not everyone in Manyike’s family was in agreement. When it came to his brother, he said, “I had to force him.”