But throughout his presidency, Donald Trump has steadily moved from covertly racist rhetoric and policies to ones that are overtly so. And standing in front of Mount Rushmore on July 3, Donald Trump abandoned any remaining shred of pretense (he doesn’t like masks anyway) and delivered a speech that offered a classic defense of white nationalism in America’s past and for America’s future. I don’t normally recommend people watch the deeply problematic speeches of this president, but I do suggest that people watch this one — especially those Republicans and white Christians who continue to uncritically endorse this president.

“Our nation is witnessing a merciless campaign to wipe out our history, defame our heroes, erase our values and indoctrinate our children,” said Trump in his Mount Rushmore speech. Trump never says the word “Confederate,” but it’s clear he is referring to the recent protests that resulted in the removal or vandalism of dozens of mostly Confederate statues and monuments across the country; to Trump, these are important parts of our history, in need of protection. (Trump’s speech also failed to mention that these statued Confederate leaders acted in treason against America to protect racialized slavery.)

Trump’s speech was not just “out of step with changing American opinion,” as many commentators have said. Fully 54% of Americans support the Black Lives Matter protests that have now occurred in at least 1,300 counties, and 67% of Americans support the “Black Lives Matter” affirmation that Trump continues to attack as a “symbol of hate.” On the celebration of the nation’s founding, Trump was extolling and identifying himself with America’s white dominant past and promising to protect it for the future. Let’s be clear: The white identity politics that are clearly animating Trump’s campaign are also white idolatry politics — and it is past time for white Christians to pay attention.

In classic white nationalist terms, Trump said that “angry mobs are trying to tear down statues of our founders, deface our most sacred memorials and unleash a wave of violent crime in our cities.” White supremacists have always tried to raise the fear of Black people and their allies and what they intend to do to the rest of us.

“We will expose this dangerous movement,” said Trump. His meaning was plain: This is a dangerous moment when people other than us could gain power; thus, we must “protect our nation’s children, end this radical assault and preserve our beloved American way of life” — with no ambiguity about who that “beloved” way of life is for.

Virtually every movement in America for civil and human rights has been described as a “left wing cultural revolution,” as Trump said again last weekend, “determined to tear down every statue, symbol and memory of our national heritage.” While I was grateful his speech at least named Black Americans like Martin Luther King Jr., Frederick Douglas and Harriet Tubman as part of our history, Trump makes clear that the “heritage” he wants to protect includes that of the pro-slavery, white supremacist Confederacy and all its monuments in our public squares — monuments Black people must walk past daily. Earlier this week, Trump even attacked NASCAR, a constituency full of his supporters, for taking down Confederate flags at their car races. 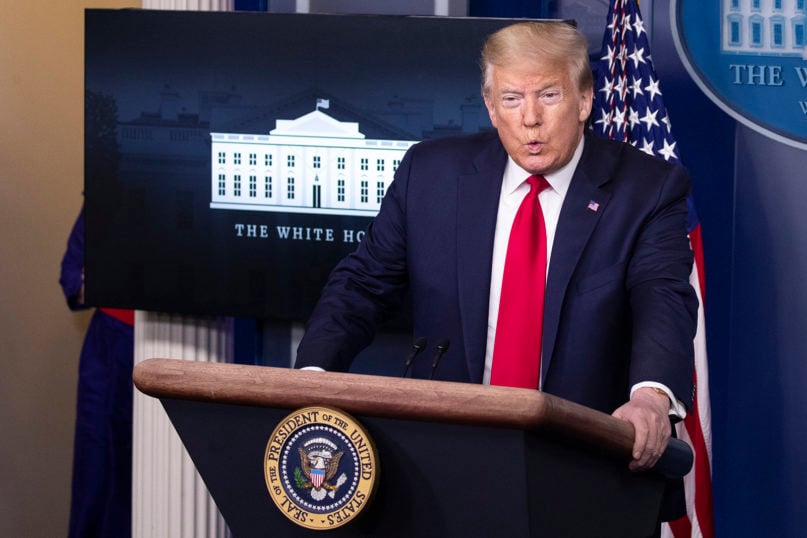 Not only did Trump stoke white racial fear and hate, he also made it partisan: “The violent mayhem we have seen in the streets of cities that are run by liberal Democrats, in every case, is the predictable result of years of extreme indoctrination and bias in education, journalism and other cultural institutions.” Apparently, seeking to re-examine America’s original sin means that “our children are taught in school to hate their own country, and to believe that the men and women who built it were not heroes, but that (they) were villains.”

Then there was Trump’s warning that “the radical ideology attacking our country advances under the banner of social justice.” (Translation: Be careful about those Christians who bring up the 2,000 verses in the Bible about the poor, economic oppression and the requirements of justice.)

“We are proud of the fact that our country was founded on Judeo-Christian principles,” Trump went on to say, without any reference to how slavery and racism destroy those very principles, including those made in the “holy image of God,” which he referenced later in the speech.

Of course, Trump again called us all to “support the courageous men and women of law enforcement” without any reference to the unjustifiable police violence against Black people, which has turned out millions of racially diverse citizens to our nation’s streets, nor with even a slight acknowledgement of any need for police reform. Trump also assured his angry white followers he supported “our great Second Amendment, which gives us the right to keep and bear arms.” In case any of them get really angry, Trump again left the door open for violence. “We stand tall, we stand proud and we only kneel to Almighty God,” said Trump — ironic words from a president who once told us he has never had anything to ask God’s forgiveness for.

Trump repeatedly suggested that any critical reflection on this moment in U.S. history is an attempt to “erase our heritage” intended to make Americans “forget our pride and our great dignity, so that we can no longer understand ourselves or America’s destiny.” Destiny? How does celebrating the pro-white and anti-Black Confederacy help us to understand “America’s destiny?” White nationalists surely have an answer; but how would Republicans or white evangelical Christians articulate what they want for America’s future and destiny?

“Americans are the people who pursued our Manifest Destiny across the ocean, into the uncharted wilderness, over the tallest mountains, and then into the skies and even into the stars,” said Trump. There’s a curious omission here: Are the only Americans those who came from across the Atlantic Ocean from Europe and conquered the “uncharted wilderness” inhabited by Indigenous Peoples whose lands and lives were stolen from them? Are the descendants of those who came as cargo on slave ships across that ocean from Africa “Americans” as well?

As Indigenous groups pointed out this past weekend, the Mount Rushmore memorial in South Dakota’s Black Hills where Trump was delivering his speech was taken from the Lakota people. In 95-degree heat, more than 100 protesters, many Lakota, lined the road leading from Keystone to the monument, holding signs and playing Lakota music. “The president needs to open his eyes,” said Hehakaho Waste, a spiritual elder with the Oglala Sioux tribe. “We’re people, too, and it was our land first.”

But the president’s eyes were not opened. Later that weekend, in his July 4 speech delivered at the White House, Trump vowed to “defend, protect, and preserve American way of life, which began in 1492 when Columbus discovered America.”

Trump’s remarks sharply contrasted those of former Vice President Joe Biden who, in a campaign video posted on Twitter, called on Americans to “commit to finally fulfill” America’s founding principle that “all men are created equal.” “We have a chance now to give the marginalized, the demonized, the isolated, the oppressed a full share of the American dream,” said Biden. “We have a chance to rip the roots of systemic racism out of this country.”

Eddie Glaude, the author of the just-released Begin Again: James Baldwin’s America and Its Urgent Lessons for Our Future, takes that vision even deeper:

What we need is a third American founding, to begin again without this insidious idea of the value gap that continues to get in the way of a New America. We need an America where “becoming white” is no longer the price of the ticket. Instead, we should set out to imagine the country in the full light of its diversity and with an honest recognition of our sins.

Glaude goes on to say:

Baldwin did not call for a third American founding. Instead, he worked tirelessly for what he called the New Jerusalem. To my mind, there is little difference between the two. Both call for a world and a society that reflect the value that all human life, no matter the color of your skin, your zip code, your gender, or who you love, is sacred.

What does Trump want? If that wasn’t clear before, it is now: “We want a clear and faithful defense of American history and we want unity,” he said in his July 4 remarks.

Trouble is, you can’t have both. Unless we come to a more truthful understanding of U.S. history — nationally and practically repenting of systemic white racism — we will never find the unity to go forward together. And as his recent speeches demonstrate, Donald Trump’s reelection campaign is designed to fuel our divisions in the name of “law and order” — all for Trump’s own benefit (his only real goal in life).

The choices we face this fall are not partisan, but moral; what is at stake is not political philosophy, but rather the soul of the nation. These choices are indeed about America’s past, but also America’s future and who “we” are going to be. We must choose whether to defend the history of white nationalism and project its vision on to the future, or decide — really for the first time in U.S. history — to become a genuinely multi-racial democracy. Now that would be something to be proud of.