(RNS) — Memoirs from people in public life often swamp us in wave after wave of their extraordinary feats and moutaintop experiences. In “We Are Not Here to Be Bystanders,” the new memoir by the Women’s March organizer and Muslim rights activist Linda Sarsour, it’s the quiet, sometimes desperate moments that bring home what grounds her commitment. Reading her 13-year-old son’s application to a magnet high school, she comes upon his story about his classmate’s comment, “You Muslims are good at math because you need to know how to make bombs.”

Readers of “We Are Not Here to Be Bystanders,” to be clear, aren’t spared the whirlwind of Sarsour’s seemingly superhuman accomplishments, or the controversial spot she occupies in the national spotlight, but the book gets at what this paradoxical and passionate justice leader truly values, precisely because she’s willing to relate the incidents that cut her most deeply.

Don’t be fooled, in short, by Sarsour’s Brooklyn attitude and accompanying accent. A national icon and a well-known voice in the justice community, she’s tough: You don’t sustain the resistance and personal attacks that she receives on a daily basis without exceptional fortitude. But I’ve experienced her as a dear friend and know she’s also a deeply caring and loving person.

The last time we were together in person, we were backstage after a screening of “Same God,” a new documentary that follows the story of former Wheaton College professor Larycia Hawkins, who lost her job with the evangelical Christian school after she asserted that Muslims and Christians worshipped the same God and wore a hijab as an expression of solidarity. 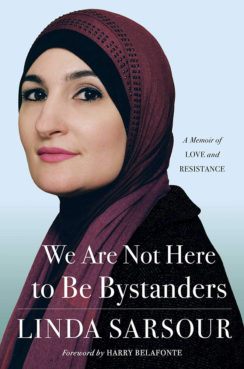 We Are Not Here to Be Bystanders” by Linda Sarsour. Courtesy image

When the film ended, Hawkins, Sarsour and I were asked to come on stage for the panel discussion. As soon as we got on stage, while still hidden from the audience’s view behind the curtain, Sarsour embraced Hawkins and began sobbing, saying repeatedly, “Thank you, sister. Thank you.” We let our emotions loose for a few moments before regaining our composure. Then we walked onto the stage as if nothing had happened.

Sarsour’s empathy for those who have been oppressed or marginalized is not performative. Nor is her toughness a mask. Her conflicting currents of grit and compassion can make things awkward for those who care about her as a person: her personal politic of being steadfastly unapologetic makes one feel apologetic instead when she shows tenderness.

This is in part because Sarsour never presents herself as a victim, in her writing, in her activism or those personal moments. When she read her son’s application essay, she began bawling, she confesses, but her son bucks her up. “Mom, you have to go into schools with parents of kids who get beat up or bullied,” her teen tells her. “You have to be with moms at detention centers and in courtrooms because their children’s fathers are going to be sent to another country. This is not serious. I’m really okay.”

After listening to him normalize his classmates’ racism — a familiar urge to anyone who has grown up different — Sarsour shifts the perspective immediately. “He didn’t understand that nothing was more important to me than what he or his sisters needed,” she wrote, “that everything I was doing for our community, I was doing first and foremost for them. It was their world I wanted to secure, their lives I wanted to protect from the burden and danger of being demonized and feared.”

This tension, between working at a societal level to undercut inequity at its root and working at the family level to shield our kids from the ugliness of our world, is at the heart of what it means to be a citizen activist. We desperately want to create a better world for our children, but we also know that there’s only so much we can do to protect them.

This agony is what spurs the kind of persuasion that Sarsour engages in, and what makes her unswayable. The double standards and death threats won’t deter her, nor will the baseless rumors and accusations. She’s not intimidated by the fancy stages or the big names.

The thing that most people don’t get, and the thing that Linda gets better than anyone: The greatest fear of someone whose spiritual and political philosophy is grounded in love and resistance is that our loved ones’ hopes and lives are at stake.

It’s this powerful reminder that makes “We Are Not Here to Be Bystanders” a remarkable book: each of us is ordinarily human, even the most extraordinary and prominent among us.