(RNS) — Growing up in overwhelmingly white evangelical churches, I can’t recall a single sermon or Sunday school class addressing race. There were plenty of youth-group service projects aimed at helping the poor, but the striking correlation between race and poverty was never mentioned, much less unpacked. I never heard a racist comment uttered at church, but any notion that the nation’s pervasive racial disparities might be relevant to our faith never came up.

I bring up my recollections because, as the protests over the killing of George Floyd by a Minneapolis police officer move into broader conversations about racism, it remains to be seen whether whites’ attitudes about race will produce meaningful change. Prospects for reform tackling racial disparities in the criminal justice system, in educational outcomes or in access to financial resources will be shaped, in part, by those white evangelicals I grew up with. They have become a key driver of the Republican Party’s priorities, and progress will require Republican support.

Surveys show that a large majority of Americans support the protests’ goals and that an increasing number view Floyd’s death as part of a broader problem. The data also suggest that my experience is representative of a broader evangelical tendency to neglect meaningful education or self-awareness when it comes to the relevance of race in America.

In 2018, 53% of white evangelical Protestants said that socioeconomic disparities between Black and white Americans are due to a lack of effort by Black Americans, and 71% — versus 15% of Black Protestants — said that killings of Black men by police were isolated incidents.

In 2019, practicing evangelicals were more likely to affirm the statement “our society has moved past slavery” than the statement “the effects of slavery continue to be felt today.” Among all white practicing Christians in 2019, fully one-third did not believe that the nation’s history of racial injustice requires any response from the church.

But change may be coming. Evangelical leaders have spoken out on race in the last few weeks, some of them for the first time. J.D. Greear, leader of the conservative Southern Baptist Convention, recently told the world’s largest Baptist denomination that “we need to say it clearly as a gospel issue: Black lives matter.” He went further by explaining that to retort that “All lives matter” was not helpful. 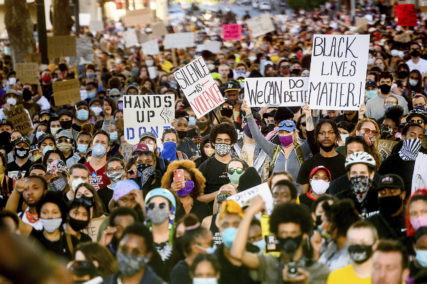 Protest marches have extended to evangelical churches and the campuses of evangelical colleges. Awareness of racial injustice appears to be penetrating evangelical circles in unexpected ways. My 78-year-old mother participated in a march — her first ever — carrying a sign urging her fellow believers to recognize white privilege.

This has not been a hallmark of modern evangelicalism, a movement that has tended to emphasize the importance of individual sin, scriptural knowledge and habits of the heart. These are all important components of a vibrant Christian faith, but they must be accompanied by serious attention to structural injustice, historical literacy and disciplines of the intellect.

In his 1994 book, “The Scandal of the Evangelical Mind,” evangelical historian Mark Noll explained that evangelical culture encourages “intense, detailed, and precise efforts … to understand the Bible.” White evangelicals have not made a parallel effort “to understand the world or, even more important, the processes by which wisdom from Scripture should be brought into relation with knowledge about the world.”

When the Gulf War broke out in 1991, Noll recounted, evangelical publishers quickly produced, and evangelicals bought in bestselling numbers, books reading the crisis as a direct fulfillment of biblical prophecy signaling the end of the world.

These books, said Noll, “shared the disconcerting conviction that the best way of providing moral judgment about what was happening in the Middle East was not to study carefully what was going on in the Middle East,” but instead to draw “attention away from careful analysis of the complexities of Middle Eastern culture or the tangled 20th-century history of the region toward speculation about some of the most esoteric and widely debated passages of the Bible.”

Has white evangelical culture changed enough since Noll wrote these words to encourage a meaningful exploration of how American laws and policies have shaped the lives of our Black brothers and sisters since our nation’s founding? Will evangelical churches have the courage to host uncomfortable conversations that don’t pretend our nation’s history of racism stopped with Brown v. Board of Education in 1954?

If they look to their Bibles, they might. Recognizing the reality of structural racism is squarely in line with evangelical theology, which recognizes that human beings often sin corporately; the nation of Israel does so repeatedly in the Old Testament. “Sin corrupts every institution and every system because, one way or another, sinful human beings are involved,” Southern Baptist Theological Seminary President Albert Mohler Jr. has said. This means that “laws, policies, habits, and customs are also corrupted by sin.”

It’s too early to know, but all supporters of racial justice should hope so. Evangelicals have a long history of putting faith into action. Once they’re committed, they tend to jump in with both feet. Evangelicals will not end up agreeing with every policy prescription championed by more left-leaning racial justice advocates, and that’s OK – disagreements were pervasive among those who marched for civil rights in the 1960s too.

If white evangelicals respond to George Floyd’s killing with a deeper dive into the painful history of this fallen world we share, we won’t all embrace a single worldview, but we will share a much firmer grasp of the problem. And that’s not a bad place to start.

(Robert K. Vischer is dean of the University of St. Thomas Law School in Minneapolis. The views expressed in this commentary do not necessarily reflect those of Religion News Service.)