(RNS) — It started three months ago with a sore throat. Then the dizziness began. When my heart rate jumped to a precipitous 150 beats per minute, I went to the emergency room, or rooms, I should say — I have lost count but am sure of at least four ER visits.

Once, when my oxygen dipped into the 80s, indicating hypoxemia, I was admitted to the hospital, but I was one of the lucky ones who did not get intubated. I was discharged within a few days, and at the time my doctors were quite confident that the worst was over.

I was back at the emergency room within a few days with acute chest pain. A protein in my blood, known as D-dimer, was unusually high, indicating blood clotting somewhere in my body.

Over the course of the next few weeks, new symptoms kept appearing. If one thing got better, another became worse. My body felt shaken by a force so strong that each muscle rippled. Often, I felt like a wounded bird fluttering and gasping for breath. I could feel a severe injury all through my body. If I managed any sleep at all, I hallucinated.

For several hours in the morning, my brain would be so foggy that it was hard to grasp if I was living in reality. I would wait for the day to end and then the night to be over. I could only hope that I would see the next day. These were my darkest hours.

I have lingering symptoms: I feel pain in my legs, a buzzing in my body that is constant. When I lie down to rest, I feel my brain shaking, and I cannot take a five-minute walk around the block without my chest hurting.

But doctors had no further answers for me. At times, I experienced the medical gas-lighting that several have discussed. One of the nurses said when I called my physician’s office: “Oh honey, you need to be on anti-depressants.” Another doctor told me that when he distracted me and watched me from the “side of his eye,” he didn’t notice the shaking of my body. When the tremors appeared on my EKG, he finally conceded: “I wish I had answers for you.”

Indeed, the virus has been baffling, with a range of illnesses and responses in different individuals. And it was clear to me that the medical system had done all it could for me. Now I had to find my way around — through the darkness and despair.

I had to work with my body, listen to it and have faith in its wisdom. It wasn’t a day-by-day struggle, rather, as Tim DeSutter, a former corporate executive and now a mind-body healing practitioner who helped me on the journey, gently suggested one day as I struggled, to take it even slower. “Thirty seconds at a time,” he implored. He also helped me understand to see the long months of symptoms as healing, not sickness.

I had to give up my illusion of control, understand the meaning of patience, as well as endurance.

For someone who had a list of goals to be accomplished each minute, a journalist eager to work round-the-clock if the news demanded, a mother trying to model the value of work, someone who enjoyed reading every minute, none of what Tim told me came naturally.

But he was right: my body demanded perfect stillness. An agitation in my body was present all the time, which worsened with any movement or emotion. There were days when I was unable to move. I could not read; I could not watch television — nothing that would cause my mind to think.

My 22-year-old son had the sickness, too, though a milder case. One morning he turned on a recording of Buddhist chants, and I found they were the only sound that relaxed and calmed my body. The soft supplication to the Buddhist goddess of healing, Tara, filled my hours, along with Sufi music and gentle sounds of Sikh prayers on the one divine. Words of the 13th-century Persian mystic Rumi, “Keep silent because the world of silence is a vast fullness,” became my meditation.

For some time this became a mode of communication between my son and me. Upon waking, he would take my phone and turn on the chants.

Still, panic would strike with any worsening symptom or pain. If I tried to meditate in those moments to calm my body, it would increase the pain in my lungs, so I would try to lie silently and feel my breath touch the tips of my nostrils as it went in and out. In this total silence, I would gradually become calmer so as to listen to an aching body, as a witness.

I was so dizzy, the act of walking became a meditation. Practice getting off the bed slowly, I would tell myself, and feel the ground under your feet, feel it step by step and rejoice that you are alive.

Each day was different. Some days got better only to get worse again. It was hard to keep the faith. I needed friends to remind me that each day wasn’t about getting better, but asking what was getting better, if only slightly, and to hold onto that hope.

The love of many, many people, in many forms, sustained and supported me and got me through. My friend Vandana, now a medical doctor, whom I’ve known since I was four, in India, held my hand from afar. So did Ashutosh, a surgeon in New York who was a friend from my schools days, whom I reconnected with by phone after decades.

If I felt alone, my friend Margie was always there, texting me from Indonesia. When I felt nervous, I called Stephanie and Melissa. And when I returned home after days at the hospital, there was hot soup waiting from my colleague Emily. Far away, from Pakistan, my friend Sadaf wrote, “You have to survive for me.” My friend Shaaz, not hearing from me, wrote randomly to anyone on Facebook who might know about me, “I haven’t heard from Kalpana, I’m worried.” Colleagues and neighbors extended their own help, in every way.

These and many acts of kindness mattered hugely. I still recall how my kind young doctor, Evan Whitehead, pulled a chair next to my hospital bed when he spoke to me, without any fear. The gesture has remained with me. It was Whitehead who diagnosed what I had as COVID-19, based on my symptoms and not on testing, which gives false negatives in 30% of cases or more. He was the first medical professional to treat me with that human care. 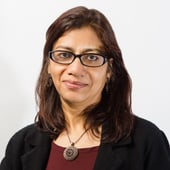 As I wait for my body to heal fully, I watch the willow plant in my backyard that has grown bit by bit in these last few weeks. My son planted it on Mother’s Day. Ever since, in a silent way, it has been a symbol, for both of us, of love and hope — and most of all of their power in our lives.

(Kalpana Jain is a senior ethics and religion editor at The Conversation. The views expressed in this commentary do not necessarily reflect those of Religion News Service.)