(RNS) — People may be reading the news and “doomscrolling” through social media during the coronavirus pandemic.

But what they don’t appear to be reading is the Bible.

That’s according to the 10th annual State of the Bible survey released Wednesday (July 22) by the American Bible Society.

The number of American adults the American Bible Society considers “Scripture engaged” based on how frequently they read Scripture and its impact on their relationships and choices dropped significantly from 28% to 22.7% between January and June, according to additional data collected by the organization in June. 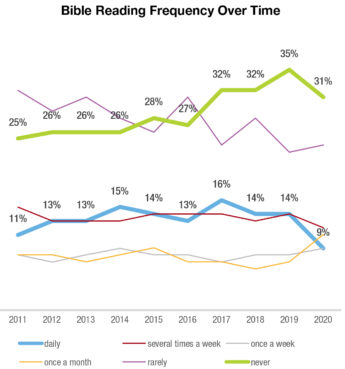 From the 2020 State of the Bible. Courtesy of the American Bible Society.

“What we saw between January and June was that 13 million people in America, who were previously really engaging meaningfully with Scripture, no longer were, and that was a serious drop-off,” said Plake.

Frequency of Scripture reading also dropped over the last year, with daily readers dropping from 14% to 9% and those who read the Bible several times a week, from 14% to 12%, the lowest number on record, according to the survey, conducted in January with Barna Group, a Christian research firm.

The decrease in Bible use tracks with what the American Bible Society has seen over the past decade of State of the Bible research, according to the director. In 2011, about 64 million people said they never used the Bible, compared with 87 million to 90 million today, he said.

“Frankly, there’s just a much larger percentage of the American population over the last 10 years that says they never use the Bible,” Plake said.

Most of that change has come in what the American Bible Society calls “occasional” Bible users or the “movable middle.” Those people are less likely than they were 10 years ago to open a Bible in search of answers to their questions, according to the research.

The number of people who regularly use the Bible — at least once a week — had held “fairly steady right up to COVID-19, and then COVID-19 has messed everyone up,” Plake said. 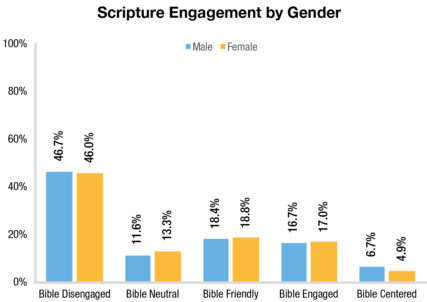 From the 2020 State of the Bible. Courtesy of the American Bible Society.

Women, who have led men in Bible engagement every year of the survey, now slightly trail behind men, he pointed out. He said that may be because of the extra demands that mothers in particular have faced during the pandemic, juggling working from home and helping children with virtual learning as workplaces and schools closed to slow the spread of the novel coronavirus.

Many churches have also moved online, he said, and that means people “can’t get together with their friends and study the Bible” the way they have in the past.

Plake urged church leaders to focus on the women in their congregations and communities who are “struggling in ways that might not make the headlines” and emphasized the importance of mentoring or meeting with church members in small groups to talk, pray and study the Bible together.

“I think the first thing is be assured that your role is critical in helping people maintain their faith and their deep connection to God,” he said. 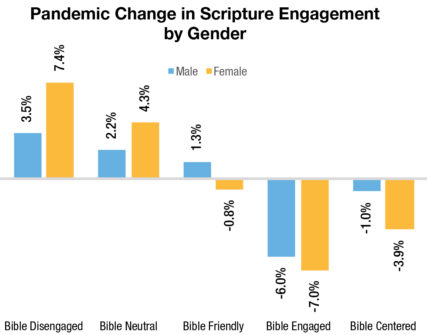 “It’s easy to think, ‘Well, hey, they can stream a service anywhere,’ and many, many people have done that, but the reality is without our pastors helping us, without leaders in our churches helping us to stay connected, people struggle.”

The State of the Bible survey is an annual survey by the American Bible Society that examines “how adults in the United States related to the Bible, what questions they had about God’s Word, and what difference it was making in their lives,” according to the 2020 report.

This year, the American Bible Society and Barna Group surveyed 1,010 American adults online from Jan. 2 to 13 and 1,000 by phone from Jan. 8 to Feb. 11. The report states a margin of error of plus or minus 3.1 percentage points at 95% confidence.

The American Bible Society repeated the survey between May 28 and June 10 to measure the impact of the pandemic, surveying 3,020 American adults online with a margin of error of 1.78% at 95% confidence.