(RNS) — Amid the ongoing demonstrations in Portland, Oregon, where officers from various federal agencies have clashed nightly with protesters, several groups of observers can be spotted by their distinctive colors:

Members of the American Civil Liberties Union in blue.

The Wall of Moms, clad in yellow.

And a group of clergy walking around in purple vests.

Chief among them is Rabbi Ariel Stone, who has convened a group of 100 clergy, outraged by the use of force by the Portland police as well as the federal troops called in by President Donald Trump. On one occasion she also arrived with her shofar, or ram’s horn.

The group she’s convened, the Portland Interfaith Clergy Resistance, makes sure at least one of its members is downtown each night and able to report back on what he or she sees — whether it’s the use of tear gas, or the arrests of protesters pulled into unmarked SUVs.

“We stand in that liminal space between the violent cops and City Hall and we try to be not only a witness, but a support to those in the streets and to reassure them that their voice is the prophetic voice of our time, calling out for justice,” said Stone, the rabbi of Shir Tikvah, an independent Portland synagogue that shares space with Bridgeport United Church of Christ.

Stone, 57, said she doesn’t see the role of clergy as leading the demonstrations. They are there to watch and advocate for marginalized people and make sure their voices are heard. “We don’t take leadership as much as we try to support the appropriate leadership and to center the marginalized voices,” she said. “We know what it’s like to be marginalized. We are supporters. We can rally resources. We can witness.”

Inspired by the death of George Floyd, the Minneapolis Black man killed by police on May 25, the demonstrations have been largely peaceful. The exceptions have been some graffiti spray-painted on the federal courthouse, broken windows and a small fire at the Multnomah County Justice Center.

Stone, who describes her congregation as progressive, queer and interfaith, said they agree on the need for social action — feeding the hungry, providing shelter for the homeless and, especially in these times, standing up for racial justice.

She likes to use a quote from the biblical prophet Jeremiah: “Seek the peace and prosperity of the city to which I have carried you in exile” (Jeremiah 29:7).

The 2017 inauguration of Trump ushered in a series of demonstrations that made Portland a national stage for the conflict between left-leaning resistance movements and their right-wing contemporaries.

“We had been at a couple of public protests and we noticed how the Portland police department was especially brutal to people of color, hitting people with batons, intimidating, pushing,” said the Rev. Tara Wilkins, who serves as the communications person for the group. “We wanted to model ourselves after the ACLU observers and to say, ‘We’re bringing the moral voice to the street.”

The group’s members are racially diverse and liberal. Recently, 11 Oregon rabbis including Stone published a letter to acting Secretary of Homeland Security Chad Wolf demanding he “recall all federal forces from Portland immediately.”

The clergy say they’ve been touched by how caring protesters are toward one another — handing out hand sanitizers and scattering wood chips where the grass had turned to mud. Local businesses have delivered food, including free pizza. 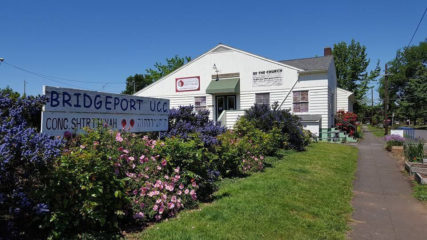 The Rev. Cecil Prescod, a minister at Ainsworth United Church of Christ, who is part of the clergy group, said he appreciates the work that Stone is doing.

“She’s maintained a discipline in terms of message and gathering the group together,” said Prescod, who gave her high marks for her “passion and energy.”

Stone received her ordination from Hebrew Union College, a Reform Jewish seminary. She spent several years in Israel and a year in Ukraine, building up Jewish congregations after the fall of the Soviet Union. She said she feels ready for this moment.

“We’re in this for the long haul,” she said. “This is our city and we love our city. As faith leaders we feel it’s incredibly important for us to stand for the values all our faiths respect and follow. We stand up and say, ‘We must seek justice. We demand that all of us are equally respected in this city.’”