(RNS) — What is the power of prayer, religion or faith when it comes to infertility?

In a study of some 200 women undergoing embryo transfers, the half that had people praying for them had much higher pregnancy rates than those that didn’t. Of course, that could be correlative: People who belong to prayer groups might have a stronger support system, a stronger community or a stronger sense of self than those not connected to prayer groups.

On the other hand, a Harvard study on random intercessory prayer in cardiac patients found no difference between the people prayed for or not prayed for. The patients themselves did not pray, nor did they know if they were being prayed for. It’s as if the scientists were trying to see if prayer could be used like medicine, regardless of the patients’ knowledge.

So I’m not here to scientifically prove to you the power of prayer, God, faith or religion. But if you are a person of faith, belong to a religious community or attend worship on a semi-regular basis, you might discover ways in which this belief system and community provides you strength. You might also find they present some particular challenges.

Fertility treatment has only been around for half a century, so obviously there’s nothing written about it in Scripture, other than a general command to “Be fruitful and multiply.” Still, religion scholars opine on all sorts of modern-day ills, from birth control to euthanasia. And even fertility treatment.

For the most part, Jews, Protestants, and Muslims are in favor, with various nuances among the sects and ca­veats, especially when it comes to embryo creation and disposition. For instance, many Jewish leaders have problems with sperm collection because of the prohibition against wasting seed and require work-arounds. Muslims generally allow both intrauterine insemination (IUI) and in vitro fertilization (IVF) for married (heterosexual) couples — no donor eggs, donor sperm, donor embryos or even a surrogate. But in Shiite-majority Iran, third-party reproduction is permitted.

Catholics are forbidden from using any assisted reproductive technology, though some go to “natural fertility centers” such as the Saint Paul VI Institute for the Study of Human Reproduction, which says it offers “reproductive health care that fully respects life,” meaning no IUI or IVF.

But some of the biggest faith-based challenges of infertility may be existing in a family-centered community.

When I first moved to Los Angeles in my early 30s, I walked into a synagogue on the Sabbath and found the entryway — the size of a basketball court — filled with strollers. I went to the beach to work on my surfing instead. 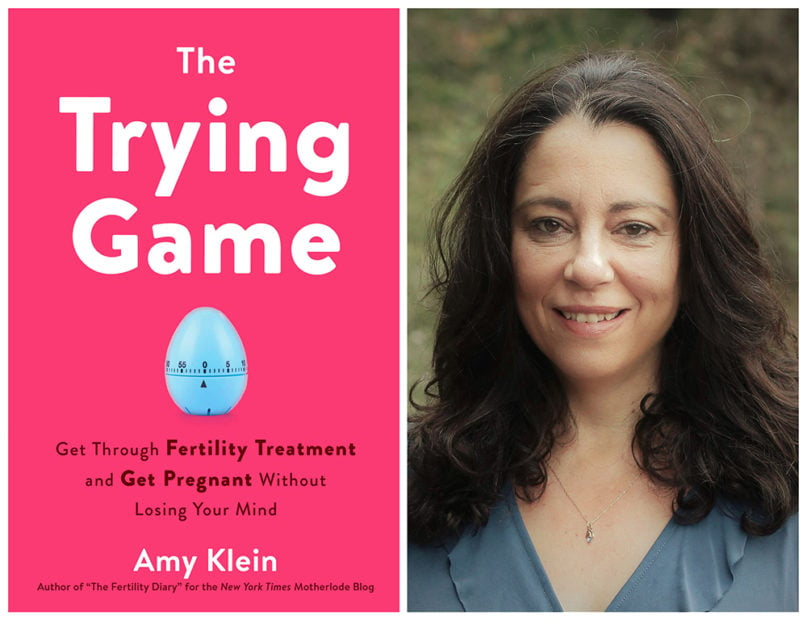 “The Trying Game: Get Through Fertility Treatment and Get Pregnant Without Losing Your Mind” and author Amy Klein. Copyright © 2020 by Amy Klein. Publishing by Ballantine Books, an imprint of Random House, a division of Penguin Random House LLC. All rights reserved. Photo by Charlotte Crawford

“When you don’t have a family, you can feel left out of the whole church experience,” says the Rev. Elizabeth Laing Thompson, a North Caro­lina minister and author of “When God Says ‘Wait’ and When God Says ‘Go.'”

During her almost three years of infertility, Thompson found it challenging to be in church. “The Christian faith community tends to circle around family life — marriage classes, Sun­day school kids’ classes, youth groups.”

At one point, six women in her congregation were all expecting baby boys within a three-week period. “I could hardly walk through the church fellowship without brushing up against someone’s belly,” she said. “The whole church was so excited, hovering around all the moms-to-be, making them meals, throwing them showers­ and there I was, infertile all by myself.”

I sympathize. I remember going to a good friend’s circumcision ceremony after a miscarriage. When I ate the challah bread,­ considered a sign of good luck and fertility, it stuck in my throat as I felt tears forming. I had to excuse myself for a cry in the bathroom.

Thompson said she found a great deal of support in her faith community: Friends at church prayed for them for years. So did the college students where she and her husband served as campus ministers.

At last, when her third IUI resulted in pregnancy, “we were mobbed by screaming, crying college students, all shouting words I could hardly understand.” Finally it was explained to her: A group of girls had been secretly fasting and praying for them for more than a year.

“To this day, I count their secret sacrifice as one of the most pre­cious gifts I have ever received,” Thompson said.

For others, however, infertility is enough to push them over the edge.

Katelyn was raised Catholic, from school to camp to church choir, but “fell away” in college. Still, it was her four years of infertility that really made her examine her faith — or lack of it.

“Getting the infertility diagnosis was hard for me, especially as people around me were getting pregnant by accident,” the Ohio teacher said. “I was already struggling with religion when we started trying but was still on the fence about what I really believed.”

Despite the church’s ban on any intervention, she and her husband started treatment — many, many medicated IUIs, a miscarriage and two rounds of IVF, which resulted in one baby at age 32. “I don’t feel comfortable practicing a religion that doesn’t feel my baby should exist,” she said. “I wouldn’t have this baby without this intervention.”

When I married Solomon, a staunch athe­ist, I knew I was leaving religion behind for good.

Still, when faced with repeat miscarriages over the next three years, I couldn’t help but wonder if it was God’s revenge. Especially because my religious friends and family kept telling me they were praying for me.

I should have been grateful that they wanted to help, but instead I was mad.

Are my prayers not good enough? I thought. Does God really have the power to give me a baby? And if so, why isn’t he doing it? Am I not deserving? After my fourth miscarriage, I felt abandoned by both medicine and God.

By the time I was ready for my last transfer, it was the Jewish High Holidays, the only time of year I still went to synagogue.

You owe me, God, I murmured into my prayer book, bowing my head and ignoring the official liturgy. My sister was pregnant with her first; my brother pregnant with his fifth. You owe me this one baby, I de­manded.

But that’s not the way God works, said Rabbi Chaim Poupko, leader of the Orthodox Congregation Ahavath Torah. He said, “I know bad things happen to everybody, and who is to say I deserve this less than anyone else?”

Bad things did happen to him. His third daughter, at the age of one, was diagnosed with an aggressive cancer. She died 14 months later. “We don’t know why God does these things, and we do our best to reckon with them,” he said.

When he and his wife started trying to have children again, they faced infertility. “The whole notion that God may owe me something, it’s a little simplistic. I don’t know how God works, I don’t know if he owes me.” Intellectually he knows that, but emotion­ally he sometimes feels otherwise.

“I can still be angry and questioning and not understanding of the very same God I still ask things for and believe in,” Poupko said. “Faith helps, in a sense. I think God provides in ways I did not un­derstand, with the people around us, the community around us and in each other.”

Three years of trying to get pregnant resulted in a miscarriage and an ectopic pregnancy. Two rounds of IVF were unsuccessful. And then they took a break. “We were stopping for a moment and playing it by ear,” he said. “We couldn’t keep doing that to ourselves.”

That’s when his wife got pregnant.

“To me the greatest testimony to God’s presence in our lives isn’t whether he sent us this or that miracle,” said the rabbi. “It’s how those who are com­mitted to him conduct themselves, how supportive they can be. I don’t see (our baby) as a miracle, but as a gift.”

(This commentary is adapted from the book “The Trying Game: Get Through Fertility Treatment and Get Pregnant Without Losing Your Mind,” by Amy Klein. Copyright © 2020 by Amy Klein. Publishing by Ballantine Books, an imprint of Random House, a division of Penguin Random House LLC. All rights reserved. The views expressed in this commentary do not necessarily reflect those of Religion News Service.)