(RNS) — A small United Methodist church in Texas is “absolutely heartbroken” after losing its pastor to COVID-19 as the pandemic spreads to rural areas of the country previously spared by the virus, according to its district superintendent.

The Rev. Tom Wood, pastor of First United Methodist Church of Itasca, Texas, died July 29, according to his obituary posted on the church Facebook page. He was 83.

“He was well-loved within the community and through the church, and he came in with so much excitement,” Hidde-Gregory told Religion News Service. “Itasca is a very small town in the northern part of Hill County, and he came in with a lot of energy and just really revived that congregation, and they were blessed to have him for so long.”

Wood was a successful salesman and business owner who came to ministry later in life, according to his obituary.

He served First United Methodist for 17 years, but, Hidde-Gregory said, he always told other pastors, “You know, I’m not a real pastor.”

The pastors he served alongside disagreed, she said. 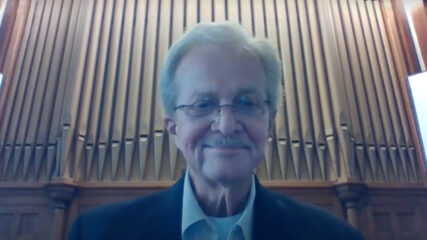 In an email, McGlothlin called Wood “a non-anxious presence.”

“Tom often remarked how he had peace, even if he did die from the virus, that his life was in God’s hands and his faith in resurrection,” McGlothlin said.

In one of his last sermons, delivered online in April as First United Methodist met virtually, Wood said it was a “good time to talk about bad times.” People might be tempted to rebel or resign themselves in bad times or ask why God would put them through such trials, he said.

“Jesus knows you’re stuck. He knows that. He wants to help you,” he said.

Hidde-Gregory said she was not aware of anyone else at First United Methodist who has contracted the coronavirus.

“There is a major outbreak in Hill County for the size of the county,” she told RNS. “It’s a rural community, so it’s sort of been slow getting to that part of the country.”

Hill County Judge Justin Lewis said in a press release last month the virus was moving through the county, population 35,000, and its neighboring communities “at a rapid pace.”

As of Tuesday (Aug. 4), the county reported 311 total COVID-19 cases and four deaths, according to Texas health and human service reports.

The outbreak in Hill County follows a national trend, according to Dr. Deborah Birx, who is coordinating the White House coronavirus response.

“What we are seeing today is different from March and April,” she told CNN on Sunday. “It is extraordinarily widespread. It’s into the rural as equal urban areas.”

First United Methodist had started meeting again in person on May 3 with precautions in place to try to keep from spreading the coronavirus, according to a post from Wood at the time on the church’s Facebook page. That included asking congregants to sit 6 feet apart with at least one row of pews between them and to bring disinfectant spray to wipe down the area around them.

Every other church in Itasca also is meeting, according to Hidde-Gregory.

Many of the churches in Hidde-Gregory’s district that reopened in mid-May began scaling back again when cases began to surge after the Fourth of July, she said.

At that point, she said, Wood already was sick.

First Methodist Church planned to meet this past Sunday “to honor the memory of Tom and his ministry and what he meant to the church as a whole,” according to a post on its Facebook page.

“The loss of Tom is a grievous loss to our church. We want to continue with the faith, love of the church, and worshiping every Sunday morning as Tom would pray it should be.”