(RNS) — Vice President Mike Pence has described himself as “a Christian, a conservative and a Republican, in that order.”

That has made Pence pretty popular with conservative evangelical Christians — not just as vice president, but also as a U.S. congressman and governor of Indiana before that.

But his time in the White House hasn’t been without controversy, even among evangelicals.

Pence has raised eyebrows for his refusal to eat alone with a woman who is not his wife or go without her to events where alcohol is being served — a rule popularized by the late evangelist Billy Graham.

His appearance at Notre Dame University, a Catholic school, ended in a student walkout and at Taylor University, an evangelical school, in the resignation of its president. Some delegates also objected to his appearance at the Southern Baptist Convention’s 2018 denominational meeting.

RELATED: The role of religion in Trump’s presidency so far: An interactive timeline

Here are five faith facts about Pence and how his conservative Christian beliefs have made him a polarizing figure.

1. He was raised Catholic, attended an evangelical megachurch and recently met the pope.

Pence has described himself as a “born-again, evangelical Catholic.”

That’s not a combination you hear every day, as journalist Craig Fehrman, who has covered the Indiana governor for Indiana Monthly, pointed out.

Growing up in an Irish Catholic family that reportedly revered the Kennedys, Pence served as an altar boy and went to parochial school in Columbus, Indiana, according to Fehrman. He then made a “commitment to Christ” while taking part in a nondenominational Christian student group in college.

Pence told The Indianapolis Star that he and his family attended Grace Evangelical Church in the 1990s, but by 2013, he told Fehrman, they were “kind of looking for a church.”

The vice president returned to his Catholic roots earlier this year, meeting Pope Francis at the Vatican before the coronavirus pandemic halted travel. The visit “made me a hero” in the United States, he enthused to the pope.

2. He has supported causes important to evangelicals since his time as a congressman.

As a member of the U.S. House from 2000 until his election as governor, Pence had a “reputation as a culture warrior (that) was unsullied,” according to Roll Call.

The website lists his bona fides: He opposed the expansion of abortion rights and federal spending on embryonic stem cell research, pushed a constitutional amendment against same-sex marriage and briefly cut off new federal funding for Planned Parenthood.

As vice president, Pence has been particularly vocal about abortion, calling it “the most pressing moral issue of our time.”

In 2017, he cast a rare tie-breaking vote in the Senate to allow states to withhold funds from Planned Parenthood and other abortion providers. Later that year, he became the first vice president to address the annual March for Life in Washington, D.C.

He made a surprise appearance at the march again in 2019, repeating a line he often uses to describe Trump: “The truth is Donald Trump is the most pro-life president in American history.” 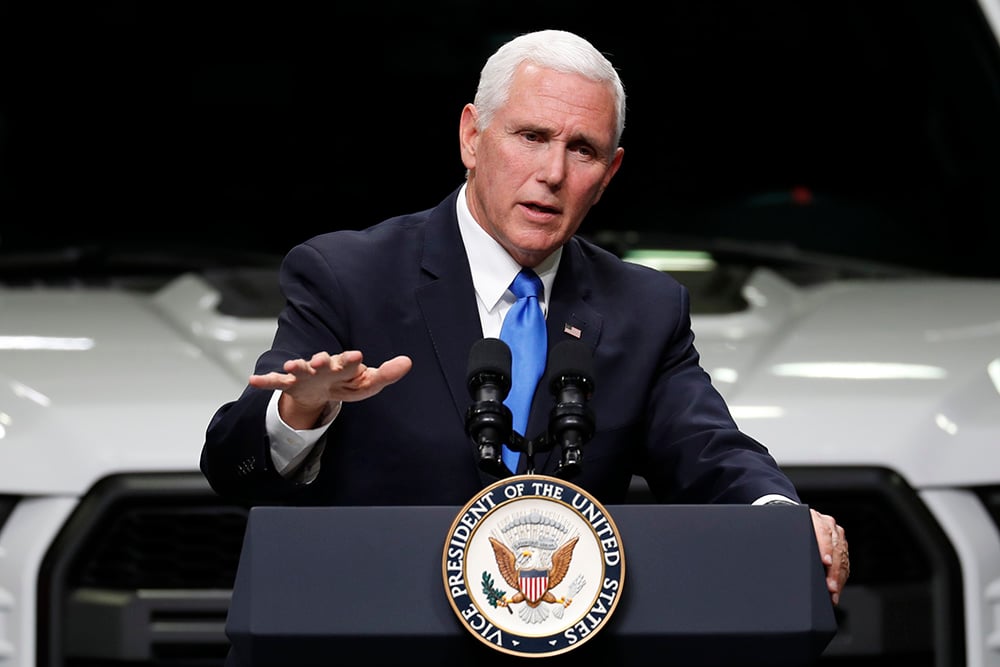 3. He clashed with the Catholic Archdiocese of Indianapolis over refugees.

As governor, Pence clashed with the Catholic Archdiocese of Indianapolis when he halted state support for efforts to relocate refugees, citing security concerns.

The archdiocese defied him by welcoming a Syrian family to the city anyway. In the end, the governor said that while he disagreed with the archdiocese’s action, he would not block food stamps and other state aid for the family.

Before he was chosen as Trump’s running mate, he came out against Trump’s plan to halt all Muslim immigration to the U.S., tweeting in December 2015 that “calls to ban Muslims from entering the U.S. are offensive and unconstitutional.”

Before Trump announced Pence as his running mate, pundits floated the former governor as a good pick because his strong pro-Israel sentiment would shore up Trump’s shaky relationship with Jewish voters.

Speaking before AIPAC in 2009, then-Rep. Pence linked his support for Israel with his faith: “Let me say emphatically, like the overwhelming majority of my constituents, my Christian faith compels me to cherish the state of Israel.”

He has backed that up in numerous speeches as vice president, recently telling Christians United for Israel, a conservative Christian organization led by the Rev. John Hagee, “We stand with Israel because we cherish that ancient promise that Americans have always cherished throughout our history: that those who bless her will be blessed.”

When Pence visited the Middle East as vice president in 2018, his theological justification for his support of modern-day Israel was met with criticism from Palestinian Christians.

“I find very little, from what I know of it, in Mike Pence’s religion that looks like Christianity to me,” one pastor said.

Pence has stressed religious freedom throughout his political career.

Last year, he addressed the State Department’s Ministerial to Advance Religious Freedom, saying, “The United States stands with all victims of religious persecution and the American people have them in our hearts — and in our prayers.”

As governor, he found himself at the center of a storm over his support for Indiana’s Religious Freedom Restoration Act, which would have allowed businesses and individuals to refuse to do business with some people based on their own religious beliefs.

His stance on the issue made him the darling of evangelicals and other conservatives.

But others said it would have allowed businesses to discriminate against LGBTQ people. Major corporations, organizations and celebrities vowed to boycott Indiana.

A week after signing the bill into law, Pence had to sign a revised version.

News
Meet Imran Siddiqui, the first Asian American vice president of the ELCA
Follow us on Facebook!
Submit your photos to RNS