(RNS) — One of the speakers set to take the stage on the second night of the Republican National Convention did not appear after sharing anti-Semitic conspiracy theories on Twitter earlier in the day.

Mary Ann Mendoza, whose son was killed by a drunken driver who was in the United States without documents, had been expected to speak Tuesday (Aug. 25) at the convention, according to the Trump campaign.

Mendoza is the founder of Angel Families, a term used by families of people killed by undocumented immigrants, and an advisory board member for both Women for Trump and Donald J. Trump for President, Inc.

But earlier in the day, The Daily Beast called attention to a tweet she had posted, pointing her followers to a thread, or series of tweets, that reportedly promoted the anti-Semitic text “The Protocols of the Elders of Zion,” claimed there is a Jewish plot to control the world and echoed other conspiracies spread by the QAnon movement. The thread included “nearly every anti-Semitic trope of the last century,” according to Politico.

“Do yourself a favor and read this thread,” Mendoza tweeted.

Mendoza later deleted her tweet and posted an apology before the second night of the convention began.

“I retweeted a very long thread earlier without reading every post within the thread,” she tweeted.

“My apologies for not paying attention to the intent of the whole message. That does not reflect my feelings or personal thoughts whatsoever.” 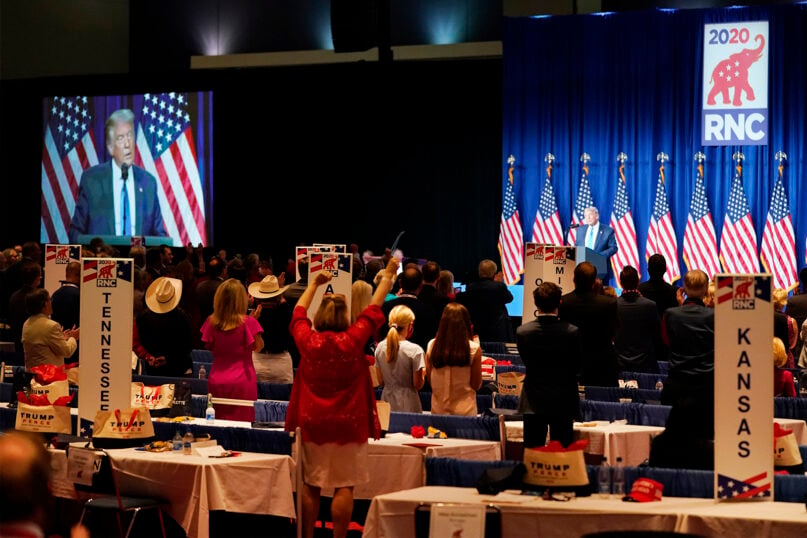 Several news outlets reported Tuesday night that the Republican National Convention had pulled Mendoza from its lineup of speakers, and she did not appear during the event.

The move came as so-called cancel culture was a theme that several speakers sounded during the second night of the convention.

“To the voiceless, shamed, censored and canceled: My father will fight for you,” said Eric Trump, one of President Trump’s sons.

Another speaker had attracted controversy earlier in the day.

Vice News pointed out a video that speaker Abby Johnson had posted online in June, in which she said it would be “smart” for police to racially profile her biracial son because, she claimed, “statistically, my brown son is more likely to commit a violent offense over my white sons.”

And others surfaced tweets Johnson had posted in May supporting “household voting,” meaning only the head of a household would be allowed to cast a ballot in elections.

“In a Godly household, the husband would get the final say,” she tweeted.

Johnson is a former Planned Parenthood employee who, after a change of heart on abortion rights, started the ministry And Then There Were None to help employees of abortion providers transition out of the industry. The group’s website describes the ministry as “pro-life without exceptions.”

Johnson’s story was brought to the screen by the Christian filmmakers behind “God’s Not Dead” in the 2019 movie “Unplanned.”