(RNS) — “Protests are not working — where do we go from here?” “They shot him in broad daylight when they knew people were watching — so now what are we supposed to do?” “There needs to be some kind of major intervention. A call for action. What to do?”

The texts I received from family and friends after video of yet another Black man, Jacob Blake, falling victim to potentially deadly policing were no longer angry, anguished or heartbroken. They were asking for a serious answer.

What to do?  It’s time to declare a national emergency on lethal police action.

It is time that this society faces the truth that the American exceptionalism that is so deeply rooted in our nation’s identity and that protects social constructs of whiteness at all costs depends on a fundamental narrative of anti-Blackness. This narrative projects the Black body as such a dangerously threatening one, practically more beastly than human. Like an animal, Black people are viewed as likely to erupt into a life-threatening tirade with little provocation, and thus are inherently violent and to be feared.

This anti-Black narrative has penetrated our collective psyche. It explains the almost instinctive tendency of some individuals — even those who otherwise consider themselves nonracist — to call police on Black people engaging in ordinary human activities. It’s as if the reality of a Black person simply going about the business of being human is so jarring to one’s psyche that something must be wrong. This explains why the police are called on Black people who are waiting, sleeping, barbecuing or birdwatching.

And then there are the police. Research shows that Black males are 2.5 times more likely to be killed by police than white males. Other studies show that Black people who have been fatally shot by police were twice as likely to be unarmed as a white person.

These figures reflect bad policing techniques and systemic racism within law enforcement agencies, but the problem goes beyond these things. The influence of an anti-Black narrative is apparent in a study that concluded that “Black faces looked more criminal to police officers; the more Black the more criminal.’” The same study found that “Black faces and Black bodies can trigger thoughts of crime (and) thinking of crime can trigger thoughts of Black people.”

The discriminatory effect played in reverse in Kenosha, Wisconsin, when police allowed an armed white man who had shot several people to walk away without incident. 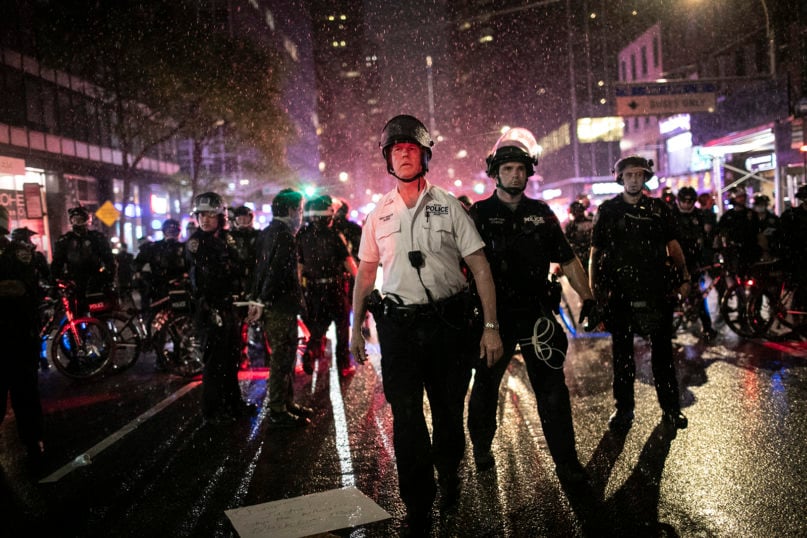 When people suggest that “bad cops” are not indicative of all cops, it’s instructive to remember how pervasive this narrative is: Law enforcement officers don’t need to be corrupt or overtly racist to see Black bodies through a lens of threat, fear and criminality.

What, then, are we to do about it? It is time to declare a national emergency in this country as we have for critical attacks on the country, and for contagions and other public health disasters. This anti-Black narrative threatens the lives and livelihood of not only the 13% of this country’s population who are targeted by it; it threatens the survival of the nation itself. Any narrative that dehumanizes or degrades another person is violent, and violence breeds violence.

That Black people are disproportionately trapped in the violence of poverty, with its social comorbidities of inadequate health care, substandard housing and insufficient employment, educational and recreational opportunities, is no accident.  Neither is the violence that erupts onto the streets in protest or in the all too common violence of crime. It is the result of an uninterrupted cycle of anti-Black violence that leads not only to the devastation of Black communities, but of the nation.

Yet it is not on the streets where this nation’s devastation is most evident. Rather, it is most evident in the places of power where laws and policies are put into place. It is in the rhetoric from the highest levels of our government that fuels anti-Blackness, jeopardizing the nation’s vision of itself as a democracy where there is freedom and justice for all.

Thus, we find a nation increasingly divided against itself as anger and frustration are stoked by the never-ending cycle of violence. Declaring a national emergency in response to anti-Blackness is the essential first step in stopping the violence that will destroy the nation.

As a start, such a declaration would entail immediate implementation of the following:

A national emergency is the minimum needed to end the texts I am getting every day. “It never seems to stop,” one person recently told me. “I’m not even trying to change hearts anymore, I’m just trying to survive being Black in this country.” We need to realize that all our lives and the future of our nation are in the same boat.

(The Very Rev. Kelly Brown Douglas is the dean of the Episcopal Divinity School at Union Theological Seminary, the canon theologian at Washington National Cathedral and author of “Stand Your Ground: Black Bodies and the Justice of God.” The views expressed in this commentary do not necessarily reflect those of Religion News Service.)