(The Conversation) — Every year, Shiite Muslims mark the death of Prophet Muhammad’s grandson Hussain with a mourning period that lasts a total of 50 days.

Ashura, the tenth day of the Islamic month of Muharram, commemorates the day Hussain died.

For millions of Shiites, this mourning period culminates in a pilgrimage to Karbala in Iraq. This pilgrimage has, in recent years, become the largest gathering of people in the world for a religious reason. This year Ashura was observed on Aug. 30 and the pilgrimage, 40 days later, will end on Oct. 9, 2020.

My research focuses on Shiite shrines and Muharram mourning practices.
The city of Karbala, which I visited twice in 2013, is located 60 miles southwest of Baghdad and 45 miles north of Najaf, the other important Shiite shrine city in Iraq.

The historic battle at Karbala

Karbala is the place where Prophet Muhammad’s grandson Hussain was killed during what is known as the Battle of Karbala in A.D. 680. According to Shiites, Hussain and his men were martyred in this battle on the day of Ashura.

After years of civil war, as well as wars of expansion, the Arab Umayyad dynasty established its rule over the region, from the Middle East to North Africa from A.D. 661 to 750. But there were those who decried Umayyad rule.

Hussain had been invited by the inhabitants of Kufa, which was a garrison town near Najaf, to come and lead them in a revolt against the Umayyad caliph in Damascus. Umayyad forces first put down the unrest in Kufa and then met and killed Hussain and his men on the desert plains of Karbala.

For Shiite Muslims, Hussain was their third imam, a worldly and spiritual leader whose direct relationship to Muhammad gave him special status and authority.

After Hussain’s death, a tomb was soon built which attracted devotees and benefactors. Najaf is where Hussain’s father, Ali, lies buried.

The pilgrimage throughout history

Over the years, Hussain’s shrine was destroyed, rebuilt, remodeled and expanded.

Muharram mourning rituals, whether in Karbala or elsewhere, have been used for political ends. Sometimes, Muharram practices were sponsored by rulers who sought to gain popular support. At other times, the rituals turned into anti-government protests. Fearing civil unrest, some rulers prohibited or limited pilgrimage to Karbala.

For example, Mutawakkil, a caliph of the Abbasid dynasty, which ruled over a vast Islamic empire from the eighth to the 13th century, feared that the rituals inflamed anti-regime fervor. He destroyed the tomb in A.D. 850 and banned the pilgrimage to Karbala.

Karbala and Najaf grew in importance in the 16th century with the founding of a Shiite state in Persia, today’s Iran, under Shah Ismail I. From then on, the Iraqi shrine cities attracted increasing numbers of pilgrims.

Many pilgrims brought bodies of deceased relatives because of a belief that being buried close to Ali or Hussain ensures that when the deceased stands in front of God on Judgment Day, Ali or Hussain will appeal to God’s mercy to allow the person’s soul to enter heaven. 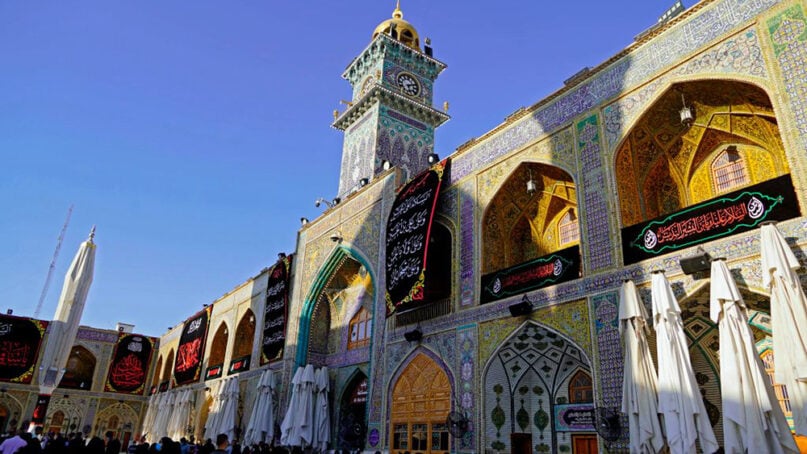 The Imam Ali mosque in Najaf, Iraq. (Photo by -/AFP via Getty Images)

This has led to “Wadi al-Salam,” Arabic for “Valley of Peace,” in Najaf becoming one of the world’s largest cemeteries, holding up to 5 million corpses.

The transport and burial of corpses provided employment for a wide strata of the population in Najaf and Karbala. Higher fees were charged from those wanting to be closer to Ali or Hussain in the burial site.

Blaming the corpse traffic as one of the reasons for several outbreaks of cholera in 19th-century Persia and Ottoman Iraq, the Ottoman government, which ruled over Iraq from the 16th to the beginning of the 20th century, sought to restrict and control the number of corpses that were brought in.

Yet even under these restrictions, around 20,000 dead bodies were brought to Najaf each year at the start of the 20th century. Today, roughly 100,000 are brought for burial in Najaf annually.

From decline to rebirth

Under the authoritarian Iraqi Baath regime, from the early 1970s to 2003, Shiite pilgrimage was closely monitored and limited.

Like many previous rulers, Saddam Hussain feared that the rituals would be used in order to incite rebellion against his regime, that the pilgrimage would turn into a protest. But once Saddam was overthrown by U.S.-led forces in 2003, the pilgrimage flourished again.

In 2004, more than 2 million pilgrims walked to Karbala, and the most common route was from Najaf to Karbala. Since then, the pilgrimage to Karbala has even eclipsed the hajj, which annually draws between 2 and 3 million. In 2014, 17 million people reportedly completed the walk to Karbala. By 2016, the number of pilgrims increased to 22 million.

This year, fear of the spread of COVID-19 has greatly restricted many pilgrimages, including the hajj. Only a limited number of Muslims already inside Saudi Arabia was allowed to attend.

As a precautionary measure, Grand Ayatollah Ali al-Sistani, a top Iraqi Shiite leader, encouraged his followers to mourn at home, rather than visit Karbala.

For Ashura this year, Shiites gathered in Najaf and Karbala, but on a much smaller scale. There was social distancing, but not everywhere. Not all pilgrims wore masks. In the absence of stringent measures, the number of infections in Iraq has already spiked. Whether the government will respond with stricter policies for the pilgrimage at the beginning of October remains to be seen.

(Edith Szanto is an assistant professor of religious studies at the University of Alabama. This article is republished from The Conversation under a Creative Commons license. The views expressed in this commentary do not necessarily reflect those of Religion News Service.)

News
With pandemic in mind, pared-back hajj in Mecca for 2nd year