(RNS) — President Donald Trump made what appeared to be a targeted appeal to his conservative religious base on Wednesday afternoon (Sept. 9), announcing a slate of potential Supreme Court candidates who he suggested would protect religious liberty, oppose abortion and keep “under God” in the Pledge of Allegiance.

Trump’s announcement was a hypothetical one, as there are no current vacancies on the U.S. Supreme Court.

Nevertheless, he noted in his remarks that as president he has already nominated two people to the bench: Neil Gorsuch, whom Trump called “very spectacular,” and Brett Kavanaugh, whom he described as “outstanding.”

Trump suggested there is a “radical left” movement that, if allowed to gain power, would enact an agenda opposed by many conservative Christians: expanding abortion rights, removing the phrase “under God” from the Pledge of Allegiance and threatening religious liberty.

“Our cherished rights are at risk, including the right to life and the great Second Amendment,” Trump said.

The president then listed off 20 new names that added to an existing list of potential judges he has pledged to choose from if another Supreme Court vacancy should emerge.

Among them were were a number of conservative legal voices such as Greg Katsas, a D.C. Circuit judge and former White House lawyer; Kate Comerford Todd, current White House deputy counsel; and Christopher Landau, the U.S. ambassador to Mexico.

Also among the names were conservative lawmakers such as Arkansas Republican Sen. Tom Cotton, who has long championed a conservative vision of religious liberty; Texas Sen. Ted Cruz, a conservative Christian who launched his 2016 presidential bid from Liberty University; and Missouri Sen. Josh Hawley, an evangelical Christian who clerked for Chief Justice John Roberts and worked on the landmark Burwell v. Hobby Lobby Supreme Court decision. 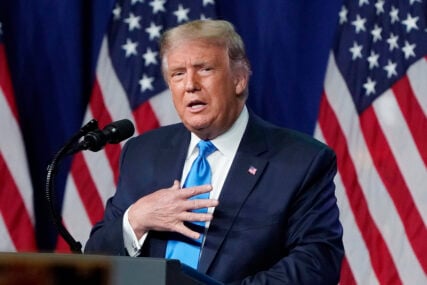 Within minutes of the announcement, Cotton began tweeting his positions on major legal issues.

“The Supreme Court could use some more justices who understand the difference between applying the law and making the law, which the Court does when it invents a right to an abortion, infringes on religious freedom, and erodes the Second Amendment,” he tweeted.

He later added “It’s time for Roe v. Wade to go” and “The Second Amendment protects your right to own a gun—period.”

Hawley, by contrast, appeared to reject Trump’s offer and suggested he had already told the president as much before the announcement.

“I appreciate the President’s confidence in listing me as a potential Supreme Court nominee,” Hawley tweeted. “But as I told the President, Missourians elected me to fight for them in the Senate, and I have no interest in the high court. I look forward to confirming constitutional conservatives.”

Cruz, for his part, called the offer “an immense honor.”

The announcement appeared to be geared toward energizing Trump’s conservative Christian base, which includes activists who have long championed control of the Supreme Court as a goal.

The Rev. Johnnie Moore, who has operated as the de facto spokesman of Trump’s informal band of evangelical advisers, was quick to note that “several Evangelicals” were among those added to Trump’s list.

Jeanne Mancini, president of the anti-abortion group March for Life, also issued a statement that appeared to laud the decision.

“One of President Trump’s greatest accomplishments has been the restoration of the judicial system through the appointment of judges who respect life and the U.S. Constitution,” Mancini said. “We anticipate that process will continue in a second term and look forward to the day that courts recognize the inherent dignity of all human life.”

The reason for the timing of the announcement wasn’t immediately clear, although Trump noted that his Democratic opponent, Joe Biden, had not released the names of his own potential Supreme Court appointees.

The announcement also occurred in the midst of an ongoing scandal: News broke Wednesday morning that Trump was recorded telling veteran journalist Bob Woodward that he repeatedly played down the threat of the coronavirus pandemic despite knowing the virus’s deadly scope in early February.

When Trump ended his news conference after announcing potential justices, he allowed for questions from the press; every single inquiry from reporters was about the Woodward quote.