(RNS) — One hundred years ago on Sept. 19, the Indian yogi and guru Paramahansa Yogananda arrived in Boston as the Indian delegate for the Unitarian Conference of Religious Liberals. Yogananda’s arrival, along with an earlier visit by another Indian teacher, Swami Vivekananda, began yoga’s rise on these shores into a major industry, as well as one of the most significant examples of syncretism — a religious and cultural mashup — in the history of the West.

Yogananda’s contribution to the growing diversity of America’s religious landscape in the 20th century was to adapt yoga’s poses, originally designed to honor the Hindu sun god Surya, for an American audience. But his deeper influence was to pioneer a vision of wellness in which spirituality and self-help converge.

His Self-Realization Fellowship eventually offered as many as 800 temples, ashrams and retreats in 60 countries. Its blend of traditional Hindu practice with the American self-help culture resulted in the flowering of earlier movements such as transcendentalism and New Thought.

Yogananda created a new model for pop spirituality. A bestselling author — his 1946 “Autobiography of a Yogi” has sold over 4 million copies and was distributed at Steve Jobs’ funeral by order of the Apple founder himself — he had a vocal celebrity fan base. (Early followers included Mark Twain’s granddaughter.) Yogananda combined pop culture stardom with an approach to faith centered on a personal consciousness of the divine, and the fundamental unity of all spiritual paths, over specific dogma or doctrine. (That included his own native Hinduism: He wrote his own highly singular interpretation of the Bhagavad-Gita.)

His “The Second Coming of Christ: The Resurrection of the Christ Within You,” published in 1979,  when Yogananda was 86 years old, revealed in Yogananda’s words “the complete harmony and basic oneness of original Christianity as taught by Jesus Christ and original Yoga,” In addition, he proposed to “show that these principles of truth are the common scientific foundation of all true religions.” 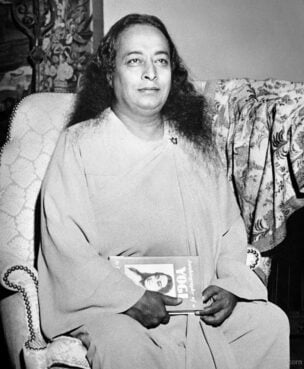 Paramahansa Yogananda with his book “Autobiography of a Yogi.” Photo courtesy of Creative Commons

This set the stage for a spirituality that can be found as much in an exercise studio as in a church. Yogananda’s vision of a spiritual unity translated into wellness and New Age circles alike as a nebulous idea of unifying energy: a great something not limited by any single theological system. He also championed a vision of enlightenment as primarily personal: predicated on inward attention and focus on the self, rather than outward action or knowledge of metaphysical principles.

Humankind’s goal was “knowing in all parts of body, mind, and soul,” he wrote, “that you are now in possession of the kingdom of God; that you do not have to pray that it will come to you; that God’s omnipresence is your omnipresence; and that all you need to do is improve your knowing.”

This amalgam of self-focused, science-adjacent spirituality is everywhere in contemporary wellness culture beyond the secularized manifestations of yoga (and even those re-sacralized, and sometimes controversial, takes such as “Yoga with Jesus”) From spiritual leadership courses to “Inner Light Mineral Tinted Moisturizer,” self-care has become the key to enlightenment. At the cost of discipline of both body and mind, we can unlock our divine essence and through self-realization achieve spiritual growth.

RELATED: These women power through high-intensity workouts. Then they finish with prayer.

Yogananda’s syncretism can be spotted in the techno-utopian world of Silicon Valley, where all forms of spirituality are treated as interchangeable, platform-compatible practices for human self-betterment (something New York Times reporter Nellie Bowles covered earlier this month in writing about corporate ritual consultants).

According to one attendee at Steve Jobs’ funeral, Salesforce CEO Marc Benioff, the implicit message behind the gift of Yogananda’s book was “Actualize yourself.” Jobs, according to Benioff, “had this incredible realization that his intuition was his greatest gift. He needed to look at (the) world from (the) inside out … his message was to look inside yourself and realize yourself.”

A century on, Yogananda’s project of self-realization, and his vision of a unifying spiritual force, is more powerful than ever. Indeed, as more and more Americans join the ranks of the religiously unaffiliated, or spiritually remixed, it might just be our new civil religion. 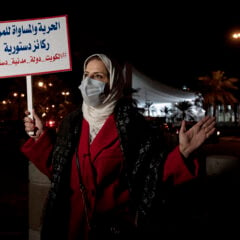 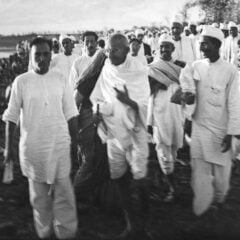