His lawyer — and his lawyer’s kids — want to do something about it.

The half American eagle, half beagle cartoon figure is the mascot for a new series of kids’ videos being planned by the American Center for Law and Justice, the Christian legal nonprofit run by Sekulow and his family.

Part puppet show, part Schoolhouse Rock, with a God-and-country twist, the new series will be aimed at telling the “great and sometimes complicated history of our nation,” says Logan Sekulow, one of Jay Sekulow’s sons, in a promotional video for the series.

The video features a puppet of George Washington along with Logan Sekulow, dressed in a T-shirt with the “Bald Beagle” logo on it and a camouflage bandana. In the video, the younger Sekulow warns about political leaders and others who “want to abolish history classes.”

“They want to erase American history from classrooms and from textbooks,” he says. “That’s why now, more than ever, we need to be honest and educate our kids on who founded our country, how government works, and what, even as a kid, they can do to protect it.”

On Thursday (Sept. 17), President Trump made similar claims about American history being under threat during an event at the National Archives Museum. He promised to sign an executive order to create a 1776 Commission that Trump claimed would counter the influence of the 1619 Project published by The New York Times, which raised questions about the history of race in the United States.

By contrast, President Trump promised to promote what he called “patriotic education.”

The website for the Bald Beagle series says it will be produced by writers and performers who have worked with Disney, The Jim Henson Company, and Nickelodeon and claims it will offer a fun and exciting take on U.S. history.

“We’re committed to making kids smile, sing, and laugh while also teaching them about our country’s important and often inspiring history,” the promotional website claims. “Bald Beagle will also present lessons of the faith and moral principles that our nation was founded on and so many of us still share today.” 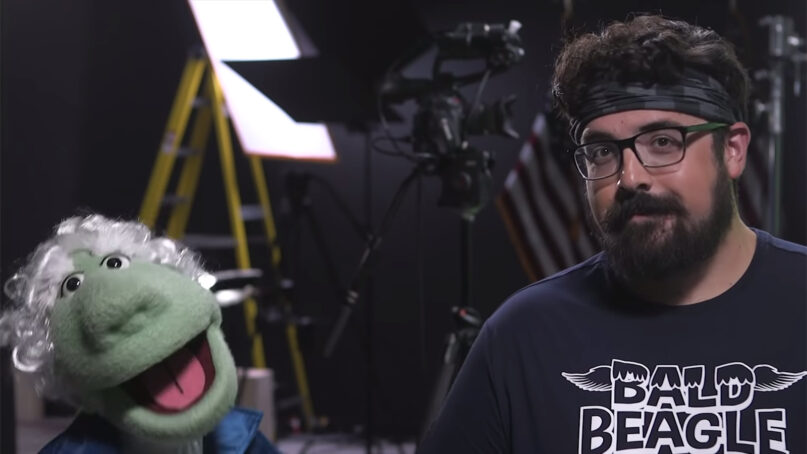 Logan Sekulow, right, is joined by a George Washington puppet in an introduction video for the new “Bald Beagle” series. Video screengrab

The ACLJ plans to air the series on YouTube and says it will be “completely free.” The nonprofit, which took in $52.5 million in donations last year, is currently raising funds for production costs. No date has been set for the series to air, and the ACLJ did not respond to a request for comment.

Jay Sekulow, who served as one of President Trump’s impeachment lawyers, also runs a classic rock cover band, with Nashville music pros and singers from the progressive rock band Kansas and the Christian rock band Petra. During the impeachment trials, the band posted a video of themselves playing “Heard It Through the Grapevine.” The band has also covered “Jesus Is Just Alright” by the Doobie Brothers and “The Weight” by The Band.

According to Jordan Sekulow, who co-hosts the ACLJ’s live daily radio broadcast, the new children’s programming is a “response to the ongoing Far Left attacks on U.S. history.”

The website for the new channel assures parents and grandparents that they “can rest assured that their kids are being taught fundamental truths — not being exposed to some extreme, subversive agenda.”

The Christian legal nonprofit is also hosting a petition to “protect American history and monuments from Cancel Culture.”

Mixing politics with kid’s entertainment can be risky.

Phil Vischer, co-creator of the Veggie Tales video series, said he’s received letters from people who say they will no longer watch that series after Vischer produced a live-action viral video about race in America.