VARANASI, India (RNS) — Wearing a lilac tunic with a coarse cotton towel around his neck, the Rev. Anand Mathew directed actors from his theater troupe recently in a village on the outskirts of this polyglot sacred city on the banks of the Ganges. The 61-year-old Catholic activist priest and playwright was staging an Indian mythological drama to explain COVID-19 to Varanasi’s poor, many of them Muslims and other religious minorities disproportionately affected by the virus.

“Even the god of death and justice is flummoxed by the coronavirus,” Mathew told his actors. Though anchored in Christianity and a believer in Mahatma Gandhi’s ideas of cosmic consciousness, Mathew draws from a broad swath of spiritual traditions to reach his fellow citizens, including Hindu mythology and Gandhi’s principles of nonviolence and civil resistance.

Religious minorities are increasingly being shunned, labeled and driven out of their jobs amid this health crisis. Mathew is teaching poor residents of the city’s ancient, crowded villages best practices for avoiding the spread of the virus. India has become one of the world’s hotspots of the pandemic, and here, in the heart of Prime Minister Narendra Modi’s political base, the virus has intensified caste divisions and political and religious polarization. Father Anand, as he is universally known, is teaching those who can’t afford to follow government directives to socially distance.

Mathew preaches a message of communal harmony and mask wearing. “The gods want us to love each other, not stigmatize the infected,” he tells a group of more than 100 villagers at a clearing near a Shiva temple fringed by thatched huts. 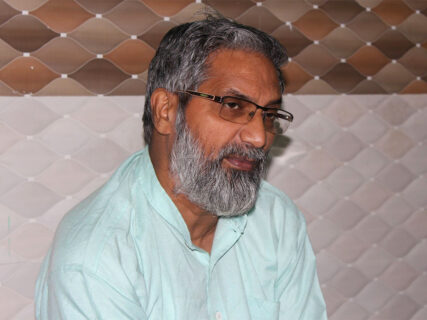 The Rev. Anand Mathew in Varanasi, India, in 2019. Photo by Dayakar

“I believe in spirituality over blind religiosity,” he said. “Since my priestly ordination, I’ve spoken out for the poor, women and sexual minorities, while condemning church malpractices and patriarchy.”

Mathew is the convener of Sanjha Sanskriti Manch, an alliance of social activists based in Varanasi. Since the Bharatiya Janata Party government announced a nationwide lockdown at the end of March, thousands of daily-wage earners have walked hundreds of miles back to their villages rather than starve in the cities. In Varanasi, Mathew has distributed food packets and essential items to more than 96,000 poor migrant workers, Muslim weavers, daily-wage earners and nomadic groups. He has also provided psychological help and spiritual support.

“Our relief work started as soon as the lockdown was announced,” he said. “We were raising funds, mobilizing civil society, cautioning against polarization, and sensitizing the masses about pandemic protocols.”

Originally from Kerala, on India’s southwestern Malabar coast, Mathew came to Varanasi in the 1970s as a member of the Indian Missionary Society to serve the rural poor. He embraced Varanasi’s multiculturalism and eclectic spirituality. Paradoxically perhaps, the Hindu holy city brought him closer to Christian spirituality through prayers, meditation and readings. Ordained a priest in 1987, Mathew later co-founded his theatre troupe to spread social consciousness through street plays, stage dramas and puppet performances.

The same themes are behind the troupe’s work in the present crisis. “Father Anand’s leadership is helping us connect COVID with social issues, religion and minority empowerment,” said Govinda, an actor who has been training with Mathew for more than a year.

Varanasi’s pluralistic culture was challenged in the early 2000s with the consolidation of Hindu nationalism. Sensing the need for communal harmony, Mathew and other social activists set up their interfaith Sanjha Sanskriti Manch.

Since the outbreak of COVID, Mathew has worked to strengthen the bonds among Varanasi’s Hindus and increasingly alienated religious minorities. “The pandemic has exacerbated religious- and caste-based prejudices,” he said. “As a faith leader, I’m reminding people to counter hate with love and stand together as Varanasi always has.” The Rev. Anand Mathew, second from left, carries a sack of food for distribution among migrant workers affected by the coronavirus pandemic in Varanasi, India. Photo by Dayakar

During Ramadan, Mathew prepared over 4,500 special food kits for poor Muslim weavers whose ancient silk-weaving tradition has been disproportionately affected by the virus. He also distributed 8,500 kits containing essential supplies among domestic workers and low-caste communities. He is now focused on providing tailoring machines and fabrics to Varanasi’s weavers and domestic helpers to empower them financially.

As he distributed these relief materials, the Catholic priest cited verses from different religious texts among groups that traditionally see epidemics as divine wrath. “Father Mathew’s words acted as psychological balm for us,” says Sandeep Maurya, a 30-year-old Hindu laborer from a nearby village. “Our faith in god and nature has now been restored.”

He has also argued for communal support online. Since July, Mathew has delivered over 35 motivational speeches on YouTube and Zoom to help people deal with the psychological effects of the crisis and fight xenophobia.

Mathew has received no support from the government, relying entirely on local networks and civil society groups to reach out to Varanasi’s minorities amid the pandemic. To the contrary, the authorities arrested him last December for taking part in protests against the controversial Citizenship Amendment Act, which denies sanctuary to Muslims from neighboring countries such as Pakistan, Bangladesh and Afghanistan, while offering refuge to people of other faiths.

But among Varanasi’s Muslim minority, Mathew has provided hope that their community will survive Hindu nationalism’s onslaught. Modi recently made good on a decades-old promise to build a temple to the Hindu god Ram on the site of a historic mosque in Ayodhya City, 125 miles from Varanasi. Varanasi’s Muslims fear their historic Gyanvapi Mosque may be the next target of Hindu extremists.

“It’s critical for minority faith leaders like Father Anand to continue the work they do,” said a Hindu shopkeeper in the labyrinth of narrow lanes near Varanasi’s ancient Kashi Vishwanath Temple.

Mathew believes his work as a minority faith leader in the holy city has not only shaped his religious views but has also made him more openminded and generous.

“It is these qualities that I’m bringing into my pandemic work,” he said. “Religion without compassion not only limits you as a person, but also the communities you serve.”