Rev. Graetz had been in hospice care before his death, according to the Montgomery Advertiser.

The former pastor of Trinity Lutheran Evangelical Church, a predominantly Black congregation, Graetz helped organize the boycott and served as a driver for participants who needed transportation.

Because of his support for the boycott and the Rev. King, Graetz’s home was bombed and his family threatened.

Graetz had moved to Montgomery in 1955 after being assigned to Trinity.

“We had very few black pastors because we required seminary training for all pastors,” Graetz told Religion and Ethics Newsweekly in 2011. “That’s why they needed some white pastors like me to serve in largely black congregations.” 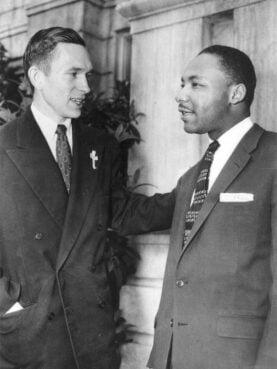 The Rev. Robert Graetz, one of the early white allies of the Rev. Martin Luther King Jr. in Montgomery, Ala., with the civil rights icon in an undated photo. (AP Photo/Gene Herrick)

One of Graetz’s former church members told the Advertiser that he was “a wonderful pastor.”

The bus boycott began about six months after Graetz had arrived in Montgomery. By that time Graetz had already met the Rev. King and Rosa Parks and wanted to stand beside them.

He once described the bus boycott as Black Christians “teaching white Christians what it means to be Christian.”

After the boycott ended, he remained involved in the civil rights movement and took part in the famed March on Washington.

“Even though we had had many other people from different faiths and different ethnic groups taking part in particular parts of the civil rights movement,” Graetz told Religion News Service in 2013, “it was clear that that massive turnout of people — ethnicities, all economic levels, everything imaginable — (showed) there’s something to the promise of the beloved community that Dr. King used to talk about. It gave all of us a real boost in terms of what the possibilities might be.”

RELATED:  Memories of the March: 10 voices recall 1963 March on Washington

Graetz left Montgomery in 1958 to serve a church in Columbus, Ohio. He eventually moved to Washington, D.C., to work as a lobbyist before he and his wife, Jeannie, returned to Montgomery in 2011.

Purple Catholicism
Is Judge Barrett’s ‘kingdom of God’ different from Obama’s?
News
Rev. Gil Caldwell, United Methodist civil rights and gay rights activist, dead at 86
Home Top Three
Rev. Al Sharpton, families of police shooting victims join march on Washington
News
March on Washington events to focus on racial justice, police brutality, voting
Articles of Faith
Harris’ nomination shows why representation matters, but is not enough
© Copyright 2020, Religion News Service. All rights reserved. Use of and/or registration on any portion of this site constitutes acceptance of our User Agreement and Privacy Policy, Privacy Statement and Cookie Notice. The material on this site may not be reproduced, distributed, transmitted, cached or otherwise used, except with the prior written permission of Religion News Service.