(RNS) — Like his late father, Billy Graham, Franklin Graham is not a marcher.

But ahead of the presidential election, the evangelical preacher is borrowing a tactic used by civil rights leaders and Black Lives Matter protesters. He is organizing a mass prayer march Saturday (Sept. 26) from the Lincoln Memorial to the steps of the U.S. Capitol.

“It’s important that men and women of God come to Washington, and let’s call on his name and ask for his help,” Graham told RNS. “We are so divided, politically, morally, spiritually. We’re just divided. We pray that God can help unite this nation to be truly the United States of America.”

Graham insists the march is not an effort to encourage voting or to rally evangelicals to the polls ahead of the Nov. 3 election. His only agenda is to get people to repent and pray, he said.

But when he speaks about the protests against police brutality, the Democratic party or President Trump’s impending Supreme Court nomination, he echoes talking points and slogans advanced by the president and the GOP.

“The Democratic Party as a whole has moved into socialism,” Graham said.

Or, when speaking of the racial justice protests, he said: “It’s basically in Democratic-controlled states that have allowed their cities to be sanctuary cities. That’s a real problem.”

Graham’s march, which begins at noon, will pause at seven locations along the 1.8-mile route. At the World War II Memorial, participants will be asked to pray for the military, police and law enforcement; at the Washington Monument, they will pray for “salvation of the lost,” a cure for the coronavirus and an end to abortion. 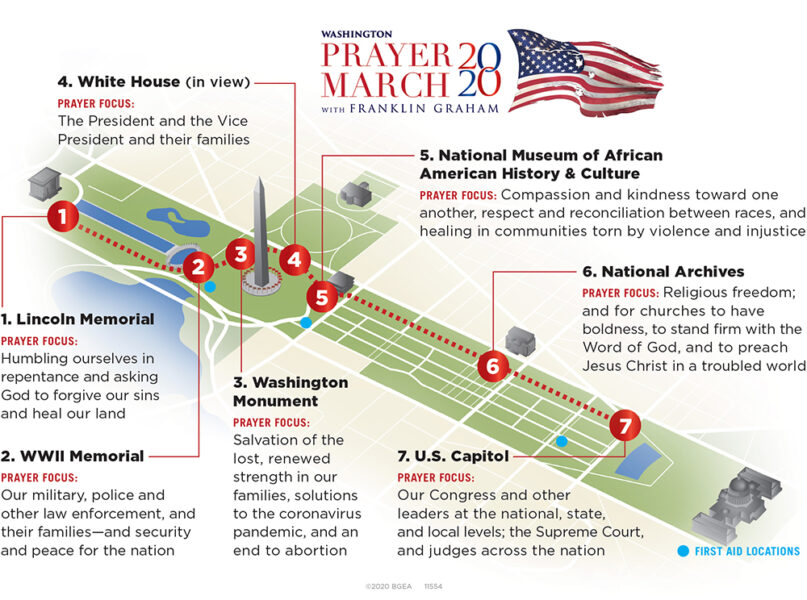 A route map of the Washington Prayer March 2020 with Franklin Graham. Image courtesy of the Billy Graham Evangelistic Association

Among those leading the prayers at each of the seven spots are familiar figures who have expressed support for Trump. They include Bishop Harry Jackson of Hope Christian Church in Beltsville, Maryland, who is also one of the president’s evangelical advisers, and Andrew Brunson, the American missionary jailed in Turkey after the 2016 Turkish coup d’état attempt against Recep Tayyip Erdoğan.

Alveda King, a niece of the Rev. Martin Luther King Jr. and an outspoken Trump supporter, will offer a prayer outside the National Museum of African American History and Culture.

Acting Liberty President Jerry Prevo said he was sending 2,200 students from the Lynchburg, Virginia, evangelical school to the march. (Prevo sits on the board of Graham’s humanitarian relief organization, Samaritan’s Purse.)

“It’s going to be hard to miss this as a kind of counter-march, an anti Black Lives Matter or anti-violence (march),” said John Fea, a professor of American history at Messiah University and an expert on evangelicalism. “His march is clearly defining itself over and against the protests against George Floyd and Breonna Taylor.”

Graham doesn’t hesitate to condemn protesters as well as calls to defund the police.

“It’s shameful when you think you want to defund the police,” he said. “Police need more training, not less. They’re putting their life on the line every single night and day for you and me.”

He added: “When you don’t have police, you have anarchy. That’s what the socialists want. They want anarchy. So they can change the Constitution, rewrite it and rebuild this country into a socialist nation.”

Some have speculated white evangelicals’ approval will rise even more once Trump is able to name a third conservative Supreme Court justice to replace Ruth Bader Ginsburg, who died last week. Conservatives have long pined for a replacement with anti-abortion credentials.

Graham said he was confident Trump would pick a solid conservative.

“He’s kept his word and he’s been honest and true,” Graham said. “I appreciate the fact that he’s kept his promise.”

Church-going Christians in cities such as Sikeston, Missouri; Overbrook, Kansas; and Gillette, Wyoming, have pledged to hold their own Main Street marches to coincide with Graham’s D.C. event.

Darrell Long, a ministry leader at Desert Springs Church in Hesperia, California, is organizing a march Saturday morning. According to a news report, the mayor of the city, 35 miles north of downtown San Bernardino, will also attend.

News
With Roe teetering, religious activists on both sides flock to the Supreme Court
Follow us on Facebook!
Submit your photos to RNS