(RNS) — We are women of faith from a wide range of traditions and united by common values. You may be familiar with some of our work. We have organized protests and marches, penned books and op-eds about religious activism, lobbied lawmakers to pass progressive policies and been arrested in acts of civil disobedience. We have founded new online communities and led well-established institutions, and used our platforms to defend democracy, the dignity of all people and liberation. Now, as the specter of a tyrant’s reelection looms, we’re doing the work together.

Today, we work hand in hand across race, religion, ability, class and cultural context for a better tomorrow.

We know this work has not always been so unified. The history of women’s movements is a story of progress blunted by division. At the Seneca Falls Convention of 1848, Black women were excluded. Sojourner Truth, an abolitionist and women’s rights activist, spoke with profundity in 1851 to being a Black woman of faith in the fight for suffrage, only to have her words butchered into caricature by a white woman “ally.”

During the Woman Suffrage Procession of 1913, Black women were forced to the back of the line as white women enforced Jim Crow segregation. During the fight for civil rights, white women largely fell silent. In the 1970s, just as the Equal Rights Amendment was building momentum, a critical mass of white women decided to “protect their way of life” rather than support broad economic, social and political equality for women across race, ability and class.

We are determined to learn from these mistakes and not replicate them.

As racism infects policies ranging from policing to immigration to pandemic response, only an intersectional, multiracial, multifaith movement can undo the damage. As white supremacist domestic terrorists radicalized by President Donald Trump’s rhetoric shed blood in communities from Charlottesville to El Paso to Kenosha, no racial or religious group can be left to fend for itself. Women of faith are uniting in our shared commitment to human dignity, justice, equality and liberation. 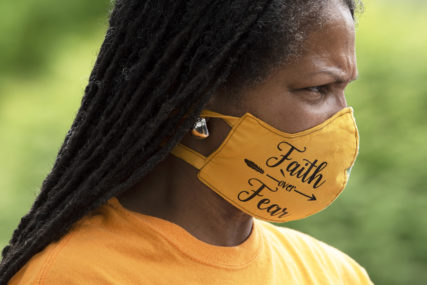 The Rev. Dinah Tatman helps those working at a coronavirus testing site June 5, 2020, at Christ the King United Church of Christ in Florissant, Missouri. RNS photo by Nick Schnelle

If we cannot do this, the teachings of our Scriptures and guarantees of the Bill of Rights are just words on a page.

The problems we seek to solve are failures not only of values, but also of policy. The denial of justice for Breonna Taylor. Mass incarceration and deportations, rampant violations of human rights at the border, the disproportionate devastation of communities of color amid the dual pandemics of racism and COVID-19, record opioid overdose deaths and the spiraling climate crisis are all products of state and federal law and administrative policy.

Women face violence and discrimination on account of our gender. Trans women of color face violence and murder at horrific rates. Sexual harassment and assault in workplaces and campuses are still endemic. The pay gap across gender, and especially between white men and Black, Latinx and Indigenous women, is a chasm. The United States has the highest maternal and infant mortality rates in the industrialized world, yet employers are given the right to deny us coverage of contraception, and elected officials block access to health coverage and then dare to ban abortion even in cases of rape and incest.

Righting these wrongs and defending democracy are inseparable imperatives.

That is why we are working to protect and expand voting rights and the ability to vote safely and conveniently — especially in communities of color. We recently released a letter signed by nearly 300 women faith leaders calling on Congress and the Trump administration to restore the full functioning of the United States Postal Service, which the president’s appointees have unconstitutionally undermined. Many of our organizations have been registering voters and laying the groundwork for civic engagement for years. We are ready to reclaim democracy from voter suppression and white supremacy between now and November.

Looking ahead, we believe our government is capable of passing policies that make this nation a far more just, equitable and safe place — a more perfect union — in the near future. We believe no human being is illegal and everyone has a right to dignity and to pursue better opportunities for their future. We believe families belong together, DACA recipients are at home here, and there should be a path to citizenship for every person who wants it.

We believe no matter how you identify or who you love, you are welcome in our congregations and at our tables and you deserve complete equality and dignity in every facet of American life.

We know women have the agency and right to make health care decisions based on their beliefs, their needs and the needs of their families. Moral autonomy regarding the starting or growing of a family belongs to people who bear children, not to politicians.

We demand equal pay for equal work and decry the massive wealth gap that leaves some mothers and children starving and without shelter while a powerful few hoard more than can be spent in a dozen lifetimes.

Every holy text we follow, from the Quran, Torah and Bible to the teachings of the Guru Granth Sahib, demands a moral obligation to the most marginalized people in society. Our Scriptures and traditions overflow with examples of lives in service to others in pursuit of justice and mercy. It is on their authority that we stand and reexamine what it means to be faithful at a time so marred by racism, hatred and division.

We are united by our religious teachings to pursue justice, equality and dignity for all. We call on all women to unite this November and beyond around these shared beliefs — and to vote accordingly.