(RNS) — The Trump administration has announced the maximum number of refugees it plans to admit into the United States in the coming year, and once again, it is a historic low: 15,000.

In recent weeks, several faith-based organizations involved in refugee resettlement had asked the administration to raise that number to its past average: 95,000.

Those groups expressed outrage Thursday (Oct. 1) over a number that came nowhere close.

“At a time of unprecedented global need, today’s decision to further cut the refugee admissions ceiling is a complete abdication of our humanitarian and moral duty,” said Krish O’Mara Vignarajah, president and CEO of Lutheran Immigration and Refugee Service.

The Trump administration sent notice of the new refugee ceiling to Congress late Wednesday night — just 34 minutes before the statutory deadline, according to The Associated Press.

The administration is required by law to consult with Congress before setting the presidential determination for the fiscal year, which begins in October.

The Rev. John L. McCullough, president and CEO of Church World Service, called the Trump administration’s cuts and delays to the U.S. refugee resettlement program “moral failures and a disgrace to the American legacy of welcome.”

“Our values as a nation and as people of faith demand that we take action when people’s lives are in danger. But for the past three years, President Trump and his administration have strayed so far from these basic principles in the name of their cruel, racist and partisan goals that the life-saving refugee resettlement program is a shadow of what it once was,” McCullough said. 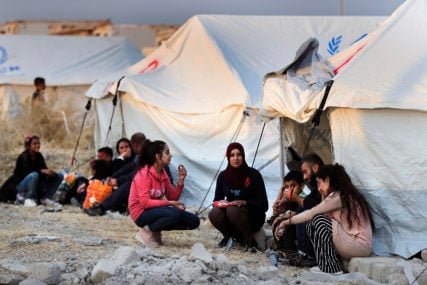 Syrians who were displaced by the Turkish military operation in northeastern Syria wait to receive tents and aid supplies at the Bardarash refugee camp, north of Mosul, Iraq, on Oct. 17, 2019. (AP Photo/Hussein Malla)

“I urge all Americans to insist that Congress hold the White House accountable to operating the refugee program as required by U.S. law.”

This year’s proposed refugee ceiling is a drop from 18,000 in the fiscal year that just ended in September. The U.S. actually resettled 11,814 refugees in that time, according to LIRS, and AP reported refugee resettlement was halted in March amid the novel coronavirus pandemic.

Biden said in a statement released on World Refugee Day in June that he would increase the refugee ceiling to 125,000, which would be about a 700% increase.

The number Biden has proposed is not much higher than the 110,000 it was during former President Barack Obama’s last term in office, when Biden was vice president.

HIAS, founded as the Hebrew Immigrant Aid Society, is one of the organizations that asked the Trump administration to return the number of refugee admissions to a historic average of at least 95,000.

World Relief encouraged evangelical Christians to ask the same of their elected officials, and LIRS sent a letter to Trump and Secretary of State Mike Pompeo, accompanied by the signatures of nearly 250 clergy in the Evangelical Lutheran Church in America.

“The administration may have turned its back on refugees, but we at HIAS won’t. HIAS, the American Jewish community, and our local resettlement partners across the country have welcomed immigrants and refugees for well over a century,” said Mark Hetfield, president and CEO of HIAS.

“HIAS and our community of supporters and partners remain more committed than ever to welcoming the stranger.”

The work of helping refugees find a home in America is largely done by faith-based organizations. Of the nine groups authorized by the U.S. government to resettle refugees, six claim a religious affiliation: HIAS, World Relief, Church World Service, LIRS, the U.S. Conference of Catholic Bishops and Episcopal Migration Ministries.