VATICAN CITY (RNS) — After a man killed three people Thursday (Oct. 29) at the Catholic cathedral in Nice, France, Pope Francis expressed his closeness to the French Catholic community, offering prayers for the victims as well as wishes that “the beloved French people may respond united for good against evil.”

The attack, one of three on Thursday attributed to Muslim extremists, took place in the Basilica of Notre-Dame in Nice as a man reportedly yelling “Allahu Akbar,” or “God is great,” stabbed the cathedral’s custodian and two women, one of whom was taken to a nearby café but later died, according to The Associated Press.

“It’s a moment of pain, in a time of confusion,” said Vatican spokesman Matteo Bruni in a statement to reporters. “Terrorism and violence must never be tolerated. Today’s attack sowed death in a place of love and consolations, such as the house of the Lord.

“The pope is informed of the situation and is close to the grieving Catholic community,” the Vatican statement continued. “He prays for the victims and their loved ones, so that the violence will cease, and they may return to see each other as brothers and sisters and not enemies so that the beloved French people may respond united for good against evil.”

Francis’ comments were conveyed in a letter sent to Bishop André Marceau of Nice and signed by the Vatican secretary of state, Cardinal Pietro Parolin, in which he condemned “in the strongest possible way such violent acts of terror.”

The mayor of Nice, Christian Estrosi, said a suspect had been arrested and was being treated at a hospital after being injured during the arrest, according to reports. Some reports suggest that the man worked with the aid of an accomplice, though investigations are still underway.

Only a few hours after the attack, a man was killed after attacking police agents in Avignon, France, and another was arrested after wounding a guard in front of the French Consulate in Jeddah, Saudi Arabia. It’s not clear if the attacks are related.

Muslim groups in France condemned the attack in Nice, asking “all Muslims in France to cancel all festivities for the Mawlid,” a holiday that began Wednesday that celebrates the birth of the Prophet Mohammed. 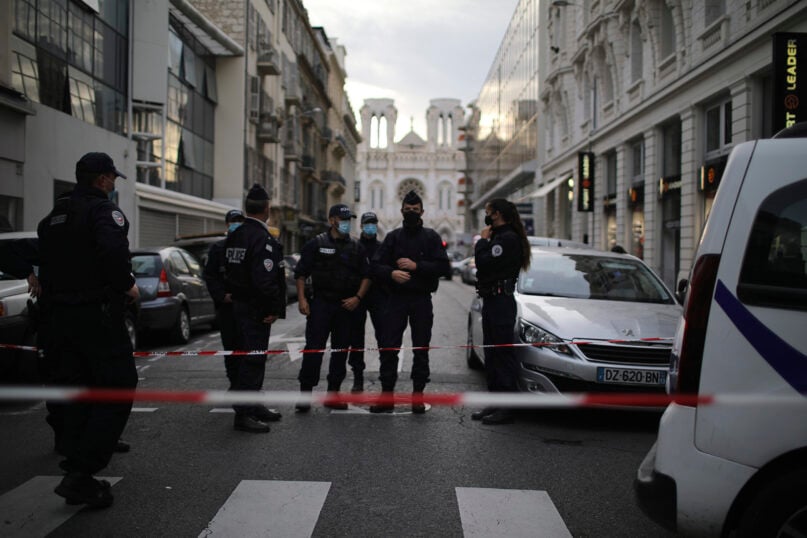 Police patrol on a street outside the Basilica of Notre-Dame in Nice, southern France, after a knife attack took place on Oct. 29, 2020. The attacker killed at least three people at the church, prompting the prime minister to announce that France was raising its security alert status to the highest level. (AP Photo/Daniel Cole)

Tensions among the Muslim population in France have been high since the trial in late September of 14 people accused of aiding the January 2015 attack at the Paris offices of the satirical magazine Charlie Hebdo, which had republished images of the Prophet Mohammad. Seventeen staffers at the magazine died.

On Oct. 5, a French high school teacher, Samuel Paty, who had presented the Charlie Hebdo vignettes during a class on freedom of expression, was decapitated at his home in the Paris suburbs. French President Emmanuel Macron condemned Paty’s killers as  “cowards” and “barbarians.” After Thursday’s attack in Nice, Macron increased the number of troops deployed in the streets of French cities as a security measure.

In an interview with Religion News Service, Arnaud Bouthéon, co-founder of the Catholic group Mission Congress and a leader of the Knights of Columbus in France, said, “The Catholic community in France must not give in to sterile anger but must also have the courage to name and denounce evil.”

The caricatures, often obscene and offensive, have contributed to making Muslim faithful “feel despised, opening the way to barbaric violence,” said Bouthéon, adding that French Catholics face the challenge of being “peacemakers, with temperance and courage.”

The Catholic lay movement of St. Egidio echoed Francis’ call for unity, citing an interreligious appeal for peace signed in Rome on Oct. 20 by Christian and Muslim representatives.

“We invite believers of all faiths, in particular Christians and Muslims, to disassociate religion from any form of violence perpetrated in the name of God,” said a statement from the community of St. Egidio.

In the United States, the Catholic Association, a group focused on religious freedom, said the recent attacks in France are part of a global assault on religious liberty by radical Islamism and secularism. “These attacks come in the wake of an endless series of arson and vandal attacks on Catholic churches worldwide,” said Ashley McGuire, senior fellow of the organization.

“Today we add our voices to those offering prayers and condolences for the families of the latest victims of violent radicalism,” she added.

RELATED: For French Catholics, arson at Nantes cathedral shows their religion is under attack

The French bishops’ conference, in expressing “immense sadness” at the news from Nice, said the attacks were a reminder of the martyrdom of the Rev. Jacques Hamel, who was killed by a terrorist in July 2016 while celebrating Mass in his church in Normandy. Such attacks aim at “generating anxiety” within society, they added, urging Catholics to hold on to the values of unity and fraternity.

“Despite the pain that grips us, Catholics refuse to surrender to fear and, with the entire nation, they want to face this blind and insidious menace,” the bishops’ statement said.

Church bells rang throughout France on Thursday, calling faithful to pray for the victims. All churches in Nice are closed and under police protection, said Marceau, the Nice bishop, in his own statement.