A guest post by Adam S. Harris and Carlene Fraser-Harris (RNS) — President Oaks’ October 2020 General Conference talk “Love Your Enemies” was praised by many as a welcome call to avoid racism and unite despite differences in order to create a better future. This is, of course, a timely, paramount message. Racism should be denounced while we continuously seek to find common ground and avoid the ugliness of the current political climate.

However, this talk was a not-so-subtle message of caution against the Black Lives Matter movement, presented as a message of reconciliation.

As Latter-day Saints in an interracial marriage, we suggest that Pres. Oaks’ pairing of these divergent messages allows members of the church to feel justified in seeing themselves as anti-racist while also condemning the Black Lives Matter Movement. This is an insufficient and thorny stance, to say the least.

With this unease regarding Pres. Oaks’ talk, we were both doom-scrolling through social media one night when one of us (Carlene) came across the quote from President Oaks stating that: “Black lives matter! That is an eternal truth all reasonable people should support.” We perked up, and clicked on Pres. Oaks’ BYU devotional address of October 27, “Racism and Other Challenges,” anxious to read this new proclamation.

However, the disjunction from the General Conference talk seems only clearer in the BYU devotional. This more recent talk was as an opportunity to clarify the original Conference address, but once again it fell short.

We appreciate that Pres. Oaks, in this second talk, acknowledges systemic racism and the fact that the US Constitution endorsed slavery. We’re grateful that he went on the record as saying that members of the church need to upend racism in their communities and within themselves. However, we identify two ways in which he undermines his own call to unite to “root out racism.” 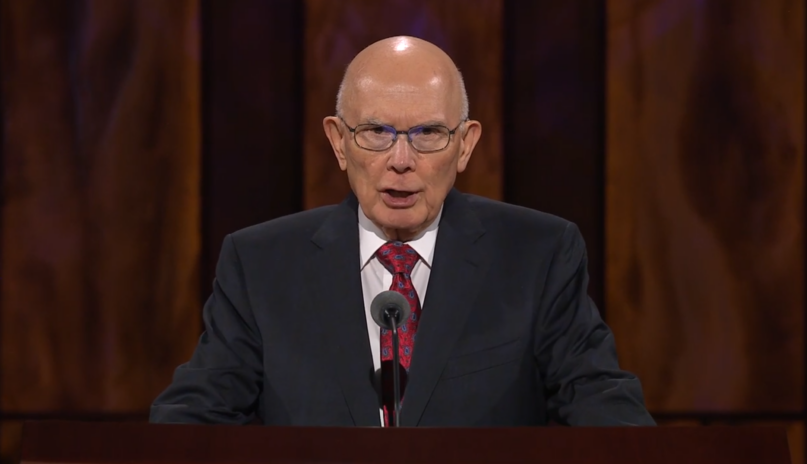 Pres. Dallin H. Oaks delivers the talk “Love Your Enemies” at the October 2020 General Conference of the Church of Jesus Christ of Latter-day Saints. Screen shot.

In both talks, Pres. Oaks is meticulous in referring to the Black Lives Matter protests as “the recent nationwide protests” or “the protests of last summer.” We expect this is to avoid using the term “Black Lives Matter.” He does eventually, in the BYU devotional, refer to the Black Lives Matter movement. And while we are grateful for his clear statement that “Of course, Black lives matter! That is an eternal truth,” there is a careful choice of words in his double-speaking of an otherwise straightforward problem.

Oaks differentiated this acknowledgment from the movement’s tactics and goals. He says that the claim “Black lives matter” should not be used to push an agenda that, in his view, will reduce police effectiveness and change “our constitutional government.”

In the Conference talk, he is preoccupied with the rare violent events that accompanied less than 7% of all BLM protests this past summer. He even equates the protesters to mobs when he says “redress of grievances by mobs is redress by illegal means. That is anarchy, a condition that has no effective governance and no formal police, which undermines rather than protects individual rights.” He then pleads for constitutional patriotism to help guide an “appropriate” means of agitating for equality under the law.

No one is tethered to a personal endorsement of everything the Black Lives Matter movement is endeavouring to do, but to dismiss it as counter-productive, anarchic and unpatriotic betrays a limited understanding of the movement and the people whose lives it represents.

For a white man to suggest that Black people should only protest or demand justice in a certain way further marginalizes this group’s efforts and gaslights the real and lived traumas of an entire race. Black people know what they face, know what has been tried, know what they are up against, and are best positioned to know the best way to seek out equality.

In the Conference talk, Pres. Oaks builds on one of Christ’s most-quoted teachings to help frame his discussion of political discourse: “But I say unto you, love your enemies, bless them that curse you, … and pray for them which despitefully use you” (Matthew 5:43–44). He then refers to those we disagree with as enemies. While we see the usefulness of engaging with Christ’s teaching, we don’t usually think of those with whom we disagree politically as our enemies, but rather those who have different perspectives and/or backgrounds that inform their opinions.

Given that Pres. Oaks disagrees with the BLM protesters, or at least some of their policy goals (e.g., defund the police) and what he interprets to be their tactics (e.g., violence), this language seems to paint BLM protesters and likely Black people by association as the enemy.

This is clearly not what Pres. Oaks intended but, from our perspective, it allows church members to digest it in that way and thus undermines his central message of rooting out racism.

How Do We Do Better?

We found it disheartening that rather than urging members to learn more about the struggles of their fellow members of color, the hurt and feelings they’ve had and are having around the events of this year in particular, Pres. Oaks instead requested that we minimize the attention and discomfort surrounding it by way of diplomatic dismissal and invalidation.

We have found that some of the most spiritual and humble servants can be numb to their own inherent biases when it comes to equality. When so many members depend on top-down instruction, it is dangerous to discuss racism in the manner that Pres. Oaks does.

The church should be a safe space to check systemic, inherent biases. People of color do not want to point fingers, are not on a mission to make you feel guilt, but simply want better.

Do the work. Stand with us. Mourn with us. Comfort us.

Adam Harris (@a_harris4 on Twitter) is an associate professor of development politics at University College London, where he studies racial and identity politics in South Africa and the US. Originally from Idaho Falls, Idaho, he now resides in London and is Elder’s Quorum teacher in the London North Ward of the Church of Jesus Christ of Latter-day Saints.

Carlene Fraser-Harris (@cfraserharris on Twitter and Instagram) is a writer whose work has been  featured in Balance Garden Magazine and ShowFace Festival. She recently completed her second graduate degree, a Masters in Publishing & Creative Writing at City University London. She is a Trinidadian-born New Yorker now residing in London.