MUMBAI, India (RNS) — Dharavi, the vast slum at the center of India’s most populous city, is filled with rows of 1,000-square-foot homes separated by narrow lanes, often choked by residents coming and going or simply looking for relief from their crammed residences.

When the coronavirus arrived in Mumbai in March, this densely populated urban sprawl was considered the most vulnerable spot for the virus to spread. But Dharavi’s rate of infection, once at 80 cases a day, is now down to 11.

The quiet presence behind this turnaround is not a public health specialist or immunologist but Kari Ahmed Ansari, a 50-year-old Muslim cleric.

“Without our strong community engagement, fatalities would have spiked and the crisis may have spiraled out of control,” said the soft-spoken teacher of Quran and sacred law in a recent interview.

That effort was carried out by 180 of Ansari’s colleagues from more than 500 mosques from the surrounding city, which draws many Muslims, and Dharavi itself. As elsewhere, in disadvantaged and more privileged places, the challenge has been to not only teach best practices for avoiding the spread of the virus, but to dispel myths, many of them imparted by religious leaders or homespun beliefs. 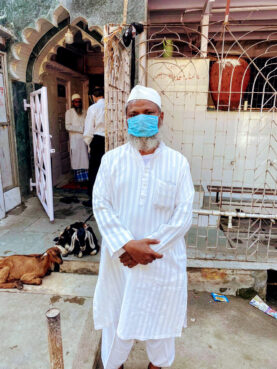 Muslim cleric Kari Ahmed Ansari poses outside a mosque in the Dharavi slums of Mumbai, India. Photo by Meraj Hussain

Dharavi’s containment efforts were lauded by the World Health Organization’s director-general, Tedros Adhanom Ghebreyesus during his July 11 virtual address to the press. Recently, the World Bank attributed Dharavi’s success in three months to a combination of “customized solutions, community involvement and perseverance.”

When the virus first hit Dharavi, there were fears that the difficulty of social distancing and the use of community toilets would turn the slum into a deadly hot spot.

Civil society groups stepped in to distribute relief materials, masks and sanitizers, but according to Ansari, the people of Dharavi were initially skeptical. COVID-19, he said, was thought to be “a conspiracy by political lobbies.” To counter these misconceptions, community leaders had to “invoke the fear of god” and social boycotts.

Armed with his Quran, Ansari visited hundreds of homes in the slum when the virus was at its peak to remind residents of advice from the Prophet Muhammad about cleanliness and community support during epidemics.

The clerics were accompanied by medical practitioners who conducted screenings and dispensed COVID-19 advice, while themselves dispelling untruths around the pandemic.

“Along with clerics, we’ve been telling people if they survive it will be a reward for their willingness to embrace science and Allah’s decree,” said Dr. Anwar Sheikh, a Mumbai-based doctor.

When mask-wearing became widespread, the clerics amplified their social messaging through anecdotes and interfaith dialogue, which helped to mitigate hate and disinformation campaigns against minorities of other faiths.

Meraj Hussain, a prominent social activist and community leader in Dharavi, says he wanted to pair doctors and clerics, “since faith moves people to action.” Issues such as “the migrant workers’ crisis, social prejudices, and stigmatization of minorities,” he said, “could also be better addressed by them.” A volunteer worker takes temperatures of residents in the Dharavi slums of Mumbai, India. Photo by Meraj Hussain

In March, the ruling Bharatiya Janata Party government led by Prime Minister Narendra Modi announced the most stringent lockdown in India, pushing the economy to the brink of catastrophe and leaving thousands of migrant workers without food and jobs.

Around the same time, a meeting of an Islamic missionary movement in Delhi called Tablighi Jamaat led to wide-scale attacks and scapegoating of Muslims as carriers of the virus. Many ruling BJP leaders called the religious gathering “coronaterrorism.”

In Dharavi, where thousands of migrant workers and minorities were stripped of their livelihoods and some driven to the point of starvation by the lockdown, the multifaith approach helped foster community spirit.

“The pandemic prized open a can of underlying issues,” says Asif Bhamla, the founder of Bhamla Foundation, an NGO in Mumbai that worked closely with the clerics.

“We felt religious leaders would not only help shift people’s perceptions, but also build interfaith solidarity in Mumbai,” Bhamla said.

Mohammad Khalid Sheikh, a 38-year-old teacher of Arabic and the Quran, said the residents shared poverty, if not a common faith. “We have been visiting the homes of Christians, Muslims and Hindus to remind them we must stand together,” he said.

When the virus cases surged again in May, the clerics went out in teams every morning to conduct house-to-house surveys and distribute relief materials. They offered psychological support to the families through counseling and spiritual discussions. 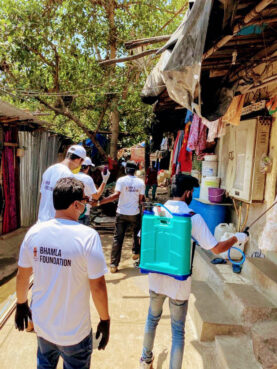 The spike forced them to re-strategize to win the cooperation of a new group of COVID-19 skeptics.

Alsaraz, a 65-year-old retired shopkeeper who contracted the virus in June, says a local cleric’s messaging allowed him to see the pandemic as a “real issue.”

“In past epidemics, Allah has tested people’s faith and patience,” says Alsaraz. “When I quarantined myself and got cured, I realized there are lessons to be learnt in these times.”

In the evenings, the clerics’ voices could be heard crackling through loudspeakers outside mosques imploring residents to avoid crowded spaces during the Muslim holy month of Ramadan, which coincided with the May spike, and August’s Hindu festival of Ganesh Puja, both occasions for families to gather and celebrate.

“Social messaging was critical,” said Muzzamil Sayyed, who teaches at an Islamic religious school in Dharavi. “We told everyone to avoid large gatherings and tone down their celebrations.”

The month of Ramadan usually brings thousands of people onto the streets of Dharavi, which are lined with stalls selling sweetmeats, religious offerings and ritual wear. Clusters of people are found in the labyrinth of alleys and “hutments” along footpaths that open onto shared spaces.

“But this Ramadan, the alleyways were empty,” says Ganesh Yadav, a Hindu shopkeeper. “Religious leaders told us to cultivate patience and tolerance.”

Even after the festival season ended and houses of worship were ordered to open their doors, the Muslim clerics continued their sensitization campaigns.

Kiran Dighavkar, an assistant municipal commissioner in Mumbai, said the clerics’ message of “tracing, tracking, testing, and treating” saved the slum from disaster.

“There are only 311 fatalities in Dharavi and under 3,700 active cases,” says Dighavkar. “Even though we had no reference book, the clerics shunned reactiveness for proactivity.”

Ansari says the fear of contracting the virus was personal for the faith leaders who risked their lives in Dharavi’s tightly packed lanes.

“But we were led by a higher spiritual calling,” he said. “Sometimes you just have to go out there and confront a crisis in order to save humanity.”