A dissenting Chief Justice John Roberts pointed out that under the circumstances there was “simply no need” to grant the temporary injunction requested by the Catholic Diocese of Brooklyn and the Orthodox Jewish organization Agudath Israel. In two cases over the summer, Roberts had sided with the court’s liberal wing to deny similar requests from religious organizations for injunctive relief.

But with Amy Coney Barrett having replaced the deceased Ruth Bader Ginsburg, the four justices who dissented in the earlier cases now had the majority — and they clearly wanted to send a message.

The unsigned majority opinion (perhaps written by Coney Barrett herself) held that the issue was “not moot” because Cuomo could at any point reimpose the limits — 10 persons per service in a “red zone,” 25 in an “orange zone” — if he deemed a COVID-19 outbreak sufficiently severe in particular neighborhoods. Should he do so, the court might not be able to act fast enough to counter the “irreparable harm” caused by keeping the affected communities from worshipping on their respective next sabbaths. 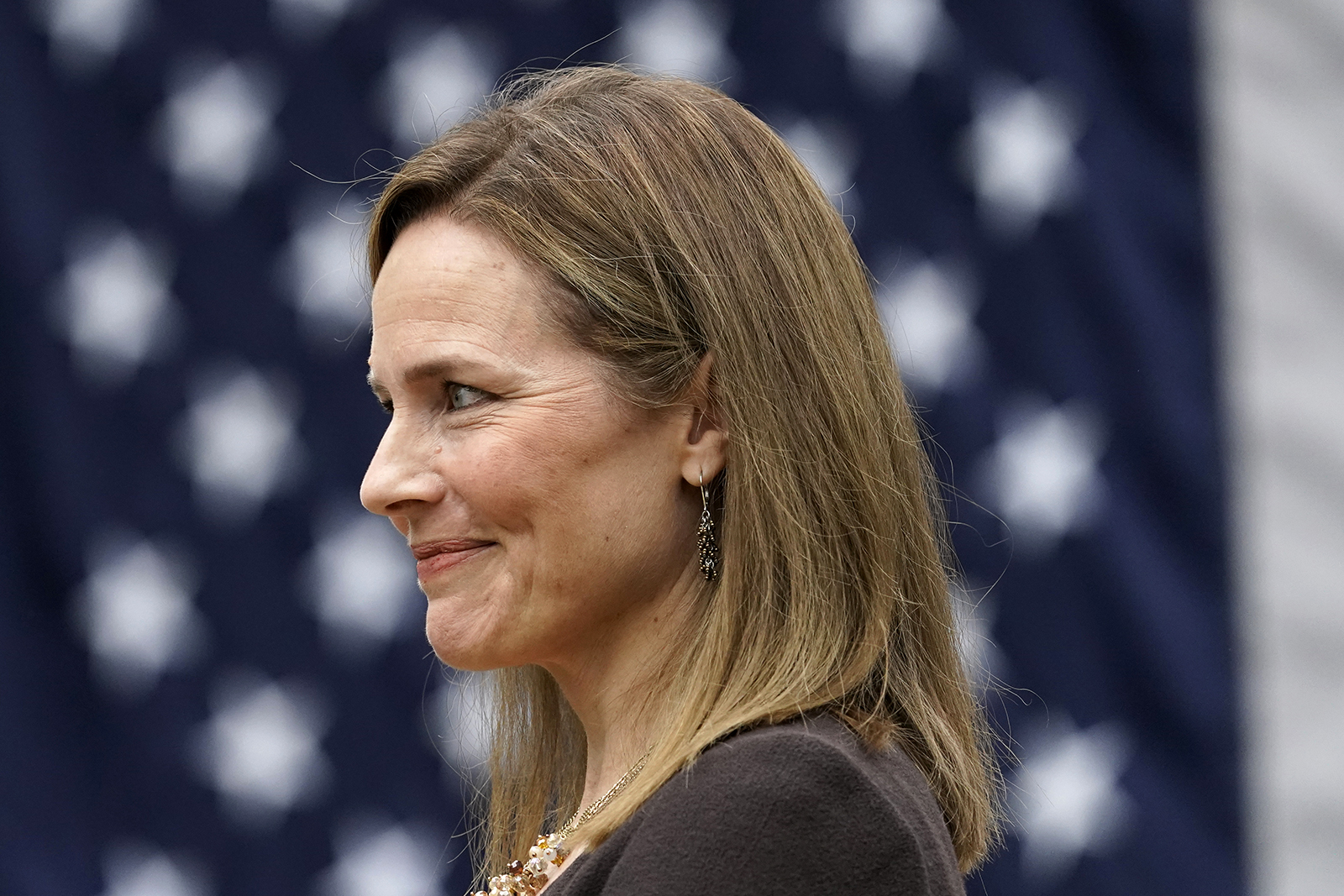 Judge Amy Coney Barrett listens as President Donald Trump announces Barrett as his nominee to the Supreme Court, in the Rose Garden at the White House, on Sept. 26, 2020, in Washington. (AP Photo/Alex Brandon)

While allowing as how the members of the court “are not health experts,” the opinion insisted that “even in a pandemic, the Constitution cannot be put away and forgotten. The restrictions at issue here, by effectively barring many from attending religious services, strike at the very heart of the First Amendment’s guarantee of religious liberty.”

In a solo concurrence, Neil Gorsuch, who along with Antonin Scalia’s seat has assumed the late justice’s high dudgeon, piled on by charging the other side with “cutting the Constitution loose during a pandemic,” declaring that “Government is not free to disregard the First Amendment in times of crisis” and “we may not shelter in place when the Constitution is under attack.”

These missiles drew a sharp defense of his three fellow dissenters from the chief justice. “They,” he wrote, “simply view the matter differently after careful study and analysis reflecting their best efforts to fulfill their responsibility under the Constitution.”

Of course, that responsibility varies according to what the court says it is at any given time. Ever since the Smith decision in 1990, written by the aforementioned Scalia, the First Amendment’s guarantee of religious free exercise has been judicially unenforceable as long as a law that inhibits someone’s free exercise is deemed “neutral” and “generally applicable.”

Three years after Smith, in Church of Lukumi Babalu Aye, the court made clear that only in the case of a law that “targets religious conduct for distinctive treatment or advances legitimate governmental interests only against conduct with a religious motivation” does the government have to meet the “strict scrutiny” standard of review — demonstrating a “compelling interest” that it is advancing by the “least restrictive means.”

If churches are considered comparable to (closed) movie theaters and concert halls, then the free exercise clause cannot be used to keep them open. If comparable to (open) supermarkets and restaurants, then they may have to be. 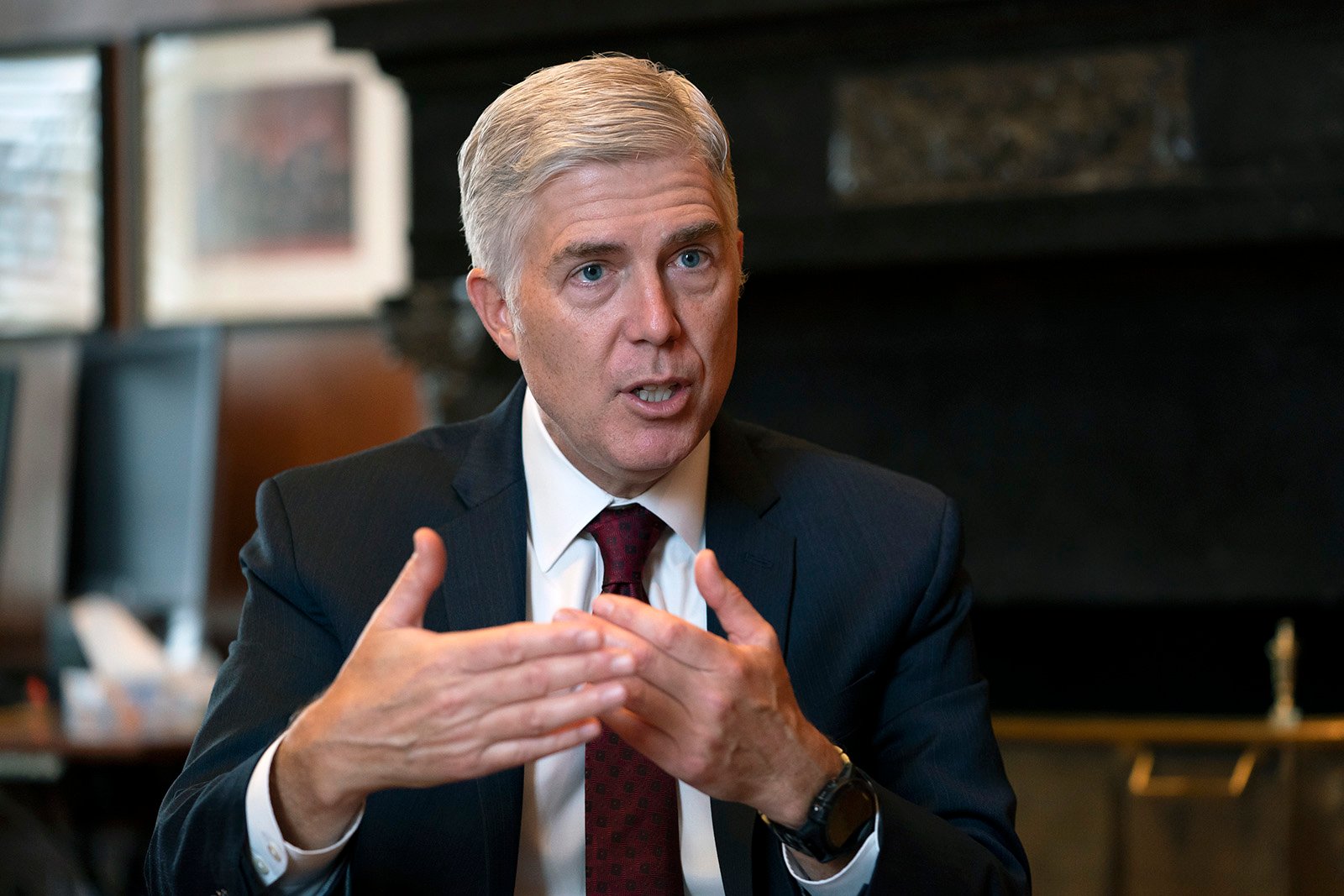 Associate Justice Neil Gorsuch speaks about events that have influenced his life and the loss of civility in public discourse, in his chambers at the Supreme Court in Washington, Sept. 4, 2019. (AP Photo/J. Scott Applewhite)

Which leads to the thornier question of essentiality. Or, as Gorsuch wrote in his concurrence, “The only explanation for treating religious places differently seems to be a judgment that what happens there just isn’t as ‘essential’ as what happens in secular spaces.”

When the devil tempts a hungry Jesus by saying, “If thou be the Son of God, command that these stones be made bread,” Jesus replies, “Man shall not live by bread alone, but by every word that proceedeth out of the mouth of God.”

On that account, churches are as essential as supermarkets and maybe hospitals as well. I do not doubt that there are those who would argue that, under a proper understanding of the First Amendment — which does not extend to a right to bread or medical care — it is more essential to keep places of worship open, even if that means an increased risk to public health.

Members of the Supreme Court’s new majority have made it rhetorically clear that, for them, the issue of in-person worship involves moral and spiritual considerations as well as medical and constitutional ones.

As Samuel Alito expressed himself last summer in the Nevada case: “The Constitution guarantees the free exercise of religion. It says nothing about the freedom to play craps or black-jack, to feed tokens into a slot machine, or to engage in any other game of chance. But the Governor of Nevada apparently has different priorities.”

The new court majority does not seem content with the Scalia rule requiring worship and gambling to be treated identically under neutral, generally applicable laws. In his concurrence, Gorsuch writes, “At a minimum, (the First) Amendment prohibits government officials from treating religious exercises worse than comparable secular activities.”

Minimum now. In the future, I believe, they’ll be taking it to the max.