VATICAN CITY (RNS) — Let there be light. The 98.5-foot-tall spruce placed just off-center in Saint Peter’s Square was lit during a small and socially distanced ceremony on Friday (Dec. 11) as prelates invoked a spirit of peace and encounter after a year marked by the COVID-19 pandemic.

This year, a light will also illuminate the Holy Family in the bronze sculpture “Angels Unawares,” created by Canadian artist Timothy Schmalz, located just to the left when facing the facade of St. Peter’s Basilica. The large sculpture, representing the plight of immigrants and refugees, was added in September 2019 to commemorate the 105th World Day for Migrants and Refugees.

RELATED: Pope Francis showcases his commitment to immigrants with new statue at the Vatican

A copy of the sculpture was unveiled in Grand Army Plaza in New York last December and will be illuminated like its twin at the Vatican for the entire Christmas season.

“This is a collaboration that reminds us how, even more this pandemic, we are all in need and waiting,” read the Vatican statement on the joint initiative.

The Christmas tree was lit with the accompaniment of traditional Christmas music played by the Vatican gendarmerie forces. The tree was brought in from Kočevje, in southern Slovenia, and stands next to a life-sized creche from the Abruzzo region in Italy, which is still struggling after two devastating earthquakes in 2006 and 2017 left many of its inhabitants homeless.

The unveiling of the nativity scene in St Peter’s Square is taking place right now. It was a gift from the Abruzzo region in Italy, while the 98 ft tree is from Slovenia. pic.twitter.com/TIUhHPoI1F

“Never more than this year, are these symbols of hope for Romans and those pilgrims who will have a chance to come and admire them,” Pope Francis told a delegation representing the Abruzzo region and Slovenia at the Vatican Friday morning.

The delegations, which included notable members of the Slovenian government and Catholic communities, were also present at the unveiling and lighting ceremony. The U.S. ambassador to the Holy See, Callista Gingrich, also attended the Vatican’s traditional lighting ceremony. The event followed social-distancing rules and was shorter than usual to avoid contamination.

The creche, a tradition attributed to Saint Francis of Assisi, is made in ceramic using a style and aesthetic typical of Abruzzo. A high school class between the 1960’s and 70’s created the nativity scene and took greater artistic liberty in the representation of the Holy Family compared to most creches. The figures are shaped like pillars, distant and not interacting with one another, reminding some of today’s social-distancing norms.

Speaking at the event, Cardinal Giuseppe Bertello, the president of the Governorate of the Vatican City State, said the creche is an artistic interpretation of “how the Gospel can love all cultures and professions.”

The original creche was presented in Rome, Jerusalem and Tel Aviv and is made of 54 large statues, including a Jewish Rabbi, an astronaut and an executioner to represent the death penalty. Gone are the traditional starlit backdrops and grassy terrains in favor of a more modern look with only a neon light framing the scene. 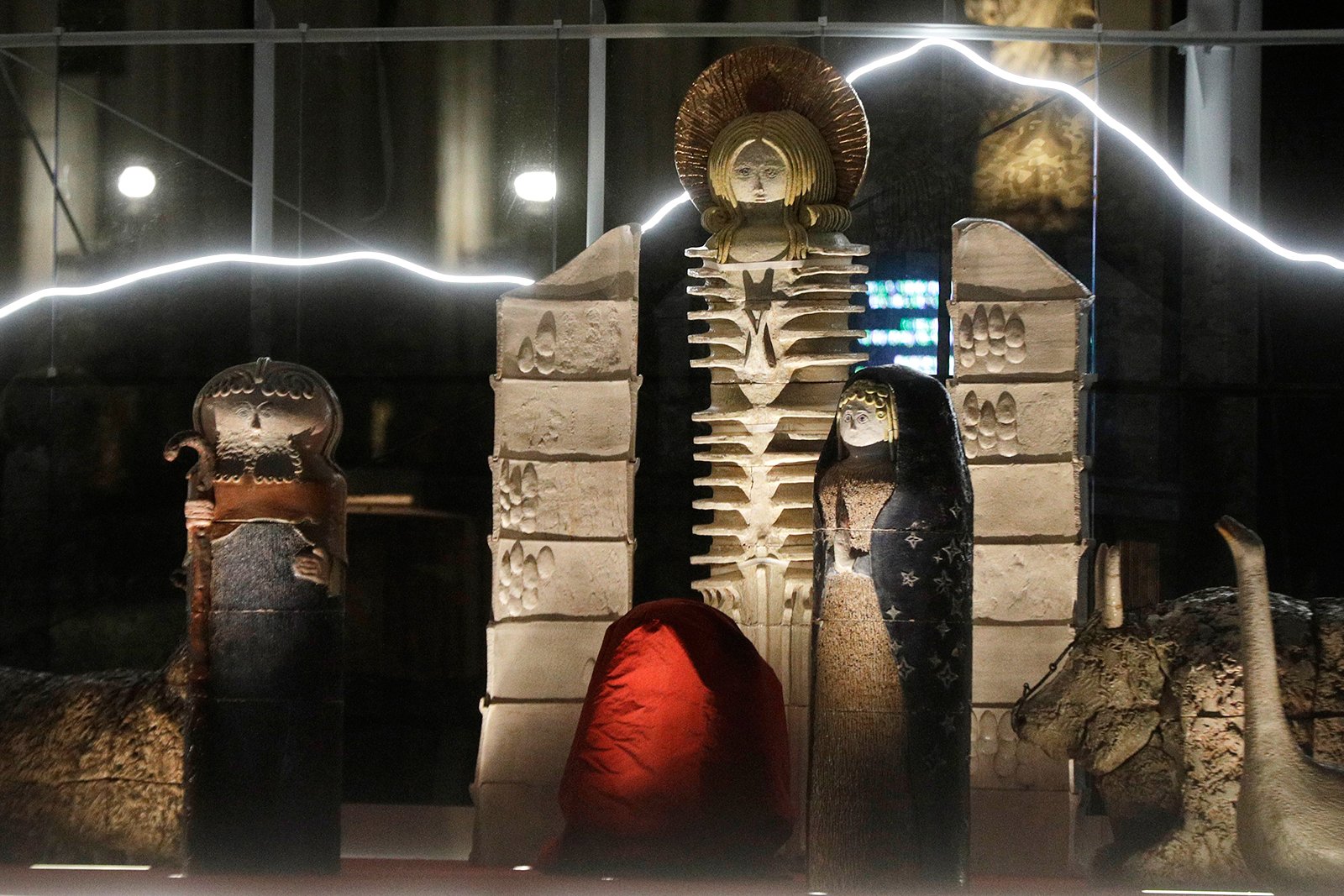 A view of the Nativity in front of St. Peter’s Basilica, following the Christmas tree and nativity scene lighting ceremony, at the Vatican, Friday, Dec. 11, 2020. (AP Photo/Gregorio Borgia)

Some people took to social media to complain that the nativity scene in St. Peter’s Square is “horrible” and “cannot be looked at.” Others compared the characters to “Martians.” But according to Pope Francis, stopping only at the aesthetic of the creche risks missing the point.

“In the nativity scene, everything speaks to the ‘good poverty,’ the evangelizing poverty that makes us blessed. By contemplating the Holy Family and the various characters, we are drawn to their disarming humility,” the pope said to the audience.

Pope Francis has made no secret of his appreciation for the ancient Italian tradition of building creches to commemorate the birth of Jesus. He made his support for the Nativity scene clear in an apostolic letter, “Admirabile Signum,” which he signed December 2019.

In the document, Pope Francis encouraged Catholics to continue this “beautiful tradition” in their homes and work spaces.

“Christmas reminds us that Jesus is our peace, our joy, our strength, our comfort. But to welcome these gifts of grace we must make ourselves small, poor and humble like the characters in the nativity scene,” Pope Francis said.

“Even this Christmas, amid the suffering of the pandemic, Jesus, small and helpless, is the ‘sign’ that God gifts to the world,” he added.

The tree and the creche will remain in St Peter’s Square until Jan. 10, 2021, when Christians celebrate the baptism of Christ.